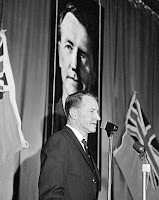 So he wasn't dead after all, but is now.

1 out of 10 and only a month and a bit left. This isn't shaping up to be a good year. If only Mr Mugabe could help me out before the new year.

you can replace Ronnie Biggs, the British train robber with anyone of the above, if you must have Ronnie their at least make him last. Cheers

Yeah - add Winnie to that list, seeing John boy Howard will get the shove....