One of the members of rape club lists his dreams as "To become a Police officer".  In other words an arrogant, swaggering bully used to getting their own way. 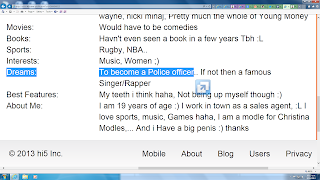 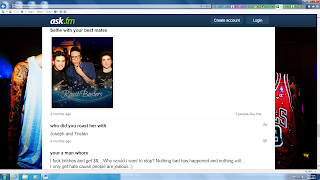 Boys aged 15-18 are prone to Lord of the Flies bestial behaviour when there is no older men to moderate and set an example.  This is most pronounced in the 'A-list' kids because they have higher expectations of sexual conquest than the B and C listers in the school hierarchy and they are not used to being refused.  If they are in the First XV and the rugby scene they are already taking advantage of being feted by the whole school.  These are the boys who have powerful parents, fathers in top positions, and have a growing sense of immunity. These rapists are also too individually thick to get anywhere without their thick mates, so we are not dealing with intellectuals here - we are dealing with thugs. It is no surprise that offenders like these are sons of police officers.  Like father like son? Doesn't really need a question mark.

Like the case of the Hawkes Bay school boys who raped one of their own with a broomstick:
TVNZ:
--
Justice Goddard has granted three former Taradale High School students, convicted of sexually violating a fellow male student with a broomstick, leave to apply for home detention.
In a retrial last month, the five boys were convicted of sexually violating the victim with a broomstick at a party in October 2001.
Former head boy Mark Hagen, former head of sport Reewee Gemmell, Anthony Lloyd, Kent Burns, Gabriel Williams and Daniel Cutbill were convicted of sexually violating their fellow student with a broomstick.
The ringleader who held the broomstick during the attack, Andrew Castles, pleaded guilty to attempted sexual violation and sexual violation in the first trial and continues to serve a two-and-a-half year jail sentence.
Castles maintains all of the boys were involved in a discussion prior to the attack and knew what was to be done with the broomstick handle which was covered in a heat-inducing cream.
--

And their excuse at the time - why they shouldn't be charged - was they wanted to be policemen!  There is a very strong correlation between policemen and rapists and vice versa.  They minimise the hurt they have caused and blame the victim.  The thinking is: a policeman is never wrong and a rapist is just a man who fucked an ungrateful slut.

Like all organised degenerate activities by groups of young men - like war parties on an expedition - if left to their own devices they will turn on each other in the end.  History is full of examples of war parties that left to run long enough will become a death cult and will kill its way through friendly and allied districts, raping looting, killing and destroying as if everyone was the enemy and ultimately begin killing themselves once they have the spare time.  So too with these rape groups.  Leave them long enough and they will rape each other such is the mentality.

Unlike the Hawkes Bay case this 'roast busters' rape club was sanctioned by the NZ Police who told them it's not rape and allowed them to continue.  Det. Insp. Bruce Scott should be charged with being a party to many of these offences. My question for the NZ Police is: how many women were on this case and what was their involvement?  I ask that because I cannot fathom how a woman would let this rape club continue.  I can imagine a typical rapist male cop turning a blind eye and discouraging victims from making a statement, but not a woman.

There must be an investigation into the police inaction - and not by the laughably misnamed 'Independent' Police Conduct Authority.  These pigs - and that is what Det. Insp. Bruce Scott and his rape-friendly colleagues are - need to be prosecuted for what they have done and what they haven't done but should have done.  Leaving the rape club website up to victimise the girls must be an offence - there is no good faith defence sustainable in this situation. Compare this awful case to how the NZ Police pursue other offenders where there is similar lack of supposed evidence or lack of a willing accuser.  Only last week they put a woman who had lost her child from an accidental drowning in a bath on trial for manslaughter!  It is a form of malicious prosecution.  And yet these rapists can boast of their crimes under the protection of the NZ Police.

It triggers such visceral anger when we see the abuse going down and the over-paid wankers who refuse to intervene.  This is hugely depressing.

Q. No.9 Jan Logie to Min of Justice (Judith Collins) about the rape club scandal.   Collins is saying girls need to come forward.  Logie isn't picking up on the PM's comments though.  Q. should be to Police Minister about the NZ Police inaction/patronage of rape club.  The issue here is the police not the court system.

What is the full name of the rapist's cop father and is he related to Warren and Steve Hales of the Mount Maunganui gang rape fame?