Did John Key just enter us into a new American war? 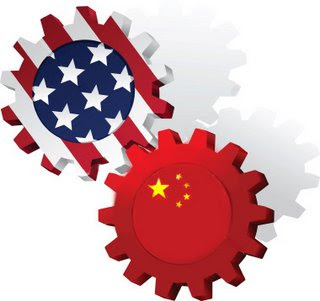 Maybe it's because no NZ journalist bothered to listen to Key after his lunch of Chinese tentacles with Hillary Clinton, or maybe it's because we expect him to slur his words around like a barrel of slippery eels, but no one seems to have noticed that John Key has announced NZs involvement in a future American war...

"...we welcome the opportunity to cooperate with the U.S. in the next conflicts."

Ummmmm, what 'next conflicts?'

What on earth was he and Hillary talking about over lunch? Was she giving him a list of targets they intend to hit and getting us on board early? Or was the PM slightly sloshed and wasn't sure of what he was saying?

Thank God, Selwyn Manning over at 36th-Parrallel noted this.

UPDATE: WRONG - apparently it was all a bad transcript now, which is annoying because I really liked the lunch of Chinese tentacles line.

NZ and Australia will become the new US-Sino cold war friction points and how we develop strategy to play each off against the other is essential to NZ's future.

With Helen Clark set to become the first female leader of the UN and Groser being lined up for the WTO, NZ's diplomatic powers are peaking.

Our second generation Chinese NZers should be harnessed into leadership roles to help build trade and cultural ties and our independence away from America should be highlighted rather than forgotten.

We need to offer China the opportunity to trade in a western country with a structure beyond lowest cost capitalism while avoiding US attempts to enforce their jurisdiction into our cyber space and economic sovereignty via the free trade deal. That Chinese trade has to be limited by not owning land while the US will demand a militaristic gesture or two.

We should be openly critical of Chinese attacks on human rights at all times and constantly. While we are doing that we agree intellectual property rights are important with America.