The final Maori Party sell out 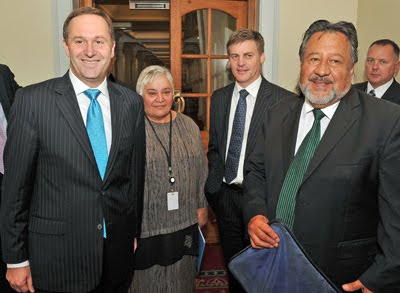 The utter capitulation of the Maori Party to John Key has been completed after their gutless posturing over Key's contempt for the Maori Council and Waitangi Tribunal came to nothing last night.

After all the dead rats the Maori Party have had to swallow and the numerous times they've threatened to walk, this backdown is hardly mana enhancing.

So the baubles win. Pita and Tariana were never walking, their personal well being is too connected to the salaries they collect. As a political force beyond 2014, it's difficult to see the Maori Party are in anything other than a death spiral now. National may have already written them off as a long term option and are eyeing up a 4% threshold Conservative Party as a replacement coalition partner for the next election.

How can the Maori Party justify their 'at the table' strategy when John Key has sold that table?

@ Bomber . " So the baubles win. Pita and Tariana were never walking, their personal well being is too connected to the salaries they collect. "

Exactly ! Dead on the fucking money Bomber , pardon the pun .
There was / is a drug and alcohol rehab organization in Christchurch called Odyssey
House . The methodology of that organization was/is the brain children of East Coast USA shrinks who believed in tough love . They'd strip down their patients , then build them up , then strip them back and thus re calibrate such druggie miscreants for normal society , what ever the fuck that is . After months of servitude and barren living conditions , the patients might get a packet of chocolate biscuits as ' reward ' for their efforts and adherence to the rigorous re-training methods used there . And rightly so , one might add . Junkies are slippery creatures and until a junkie recognizes they are junkies , junkies will do what junkies do blah , blah , blah . The point I'm making is that , that same build-up then break-down psychology can apply to highly paid ' civil servants ' and indeed us all . In fact , I would proffer , the more a politician is paid , the more vulnerable they are to being corrupted because they have ' more ' to lose . Am I re-inventing the wheel ? As I write this , I feel as though I'm preaching to the converted again . Any way , fuck it . Who cares right . That photo you posted ... look into Pita and Tariana's eyes ? They look scared shitless don't they ? jonky looks like he's just made a point and he's bobbing about at the surface , enjoying that breath of air . Result !

If the Gubbament has Nigel fuckin' buy my DVD Latta whispering sweet fucking every things into fat , well healed ears , why does the opposition not have an anti- shrink dispelling his advice ? Well , perhaps not dispelling advice , more explaining the psychological ramifications of certain fucking actions and cause / effect scenarios ? Please ? It's not rocket science . The great , great thing is that they're coming unstuck . Thanks to you guys at Tumeke and all you brilliant Tumeke followers ... They're fucked and they know it . Just look into their eyes , the cunning , greedy bastards . @ Bomber , I don't always like what you say even though I often have to agree with the things you say that I don't like . You're dead on the money here .