If you are a Pakeha who hates asset sales, you should rally around the Treaty 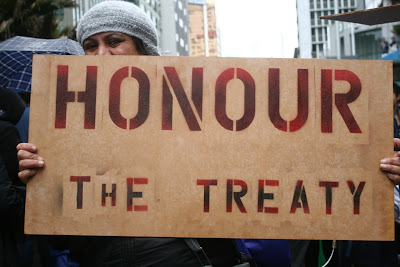 It's a little glib of John Key to claim that 'nobody owns the water' when his Government has done more than anyone else to maintain ALL rights of management and jurisdiction over water. Key wasn't claiming nobody didn't own the water when his Government took over ECan.

Pakeha are witnessing how Maori sovereignty and the Treaty can protect their interests as the Government attempt to flog off our energy assets.

Under these circumstances, the Treaty suddenly becomes seen as the sovereignty handbrake to asset sales. Key has managed to merge Maori nationalism and those espousing economic nationalism in a manner he will find hard to separate.

Treaty rights could make a cross cultural jump as Pakeha's anger at asset sales identify with self determining sovereignty.

In his blog 'Language chauvinism, Maori nationalism and the demonisation of the ‘other’ in New Zealand', John Moore argued that groups like MANA and the current Maori movement against asset sales used language that demonized the other. Hilariously, one day after that blog, Louis Crimp, the ACT Party's largest donor had this to say about Maori, "All the white New Zealanders I've spoken to don't like the Maoris, the way they are full of crime and welfare." No mention of the language of the right by Mr Moore.

What John Moore seems to have confused is that the sense of sovereignty and anger at the 'other' is a zeitgeist not only felt by Maori, but by NZers in general as the forces of global capitalism smother our economic autonomy. The dislike of the 'other' is not as Moore suggests an example of chauvinistic xenophobia, it is the response any domestic population exhibit when their ability to economically self determine are taken from them.

'Honour the treaty' means the economic autonomy that guarantees sovereignty by holding on to our assets, and Pakeha will increasingly see the legal struggle waged by Maori as a unique gift that strengthens the Treaty and protects us all.

This is an opportunity to redefine Maori Capitalism which in turn could lead to a very NZ managed capitalism where people are the focus rather than corporate profit.

If you are a Pakeha who hates asset sales, you should rally around the Treaty.

Before cheering for this latest development, I would consider what ramifications this might have. I'm none too convinced that this, should it be ruled in Maori's favour, won't simply end up with the profits from power generation getting siphoned off to whatever Iwi owns the water rights, as opposed to going to ALL NZers who either funded through their taxes or indeed directly built the fucking dams. IMO Iwi should have ZERO claim to the profits generated by hydro-electric power (if they did, then you cannot logically be against paying Iwi for the air we breathe or sunlight for that matter). So even if this were to throw a spanner into the asset sales (which I am vehemently against), this mechanism isn't worth it in the long run.

@ Nitrium . I agree . For example , Ngai Tahu is many things , it's also a huge corporation is it not ? And we all know what corporations are don't we ? Yes , that's right . Psychopathic . Corporations by their very nature don't care two flying fucks about us humanoids . Ask your self . Did jonky , boy genius and all round Golly Gee Whizz ! Is that apple pie I can smell cooling on the window sill guy , not see a Treaty Claim issue rising out of the ashes of the sell off's of OUR SOE's ? Of course he did ! And so I could argue that Maori are playing into his cunning plan . A nice piece of chess playing jonky . Maori are being manipulated to use the Treaty Settlements to ultimately corporatize New Zealand and what a safe and secure platform to argue from . One of the beleaguered ethnic minority and all that . I don't mean any disrespect to Maori here . I just don't trust that little fucker and nothing he does or says is on the fly . He knows exactly what and why he says anything . Did any of you watch @ Smith's link to that old Forex documentary ? If not , here it is again . Look closely ! You can see jonky's armpit . Uuuugghh ! http://www.nzonscreen.com/title/close-up-big-dealers-john-key-1987

lets bury the dead meaningless untruth crap about the treaty

with all due respect to the above commentators I can't see why so little faith in those whose axe they wish to grind reside here, not Switzerland or H.K.

@ Francis jane . I'm sorry , personally I'm not sure what you mean .The point I was trying to make was that this neo-liberal regime will stop at nothing and would manipulate any organization , group , Union , Church , school , police force , media etc to ensure the survival of them and advancement of their agendas as a ghastly species . They'll anger Iwi with outrageous and inflammatory jonky-isms or walk over a document of historic and cultural significance with their big flat dirty feet to divide and confuse while they walk off with our stuff . These days are NOT for the faint hearted . We Kiwis need to stick together . Maori AND non Maori . Of course you can't ' own' the bloody water . You can't ' own ' land neither . We can only rent it at best . Ask anybody who's buried in it ? Interestingly , jonky . The self - proclaimed fiscal intellechull is in fact the one who does believe you can ' own ' water . Let me illustrate ; Water is weight . Weight is energy . Energy is a Power Generating SOE . That SOE is sold to foreigners ultimately for quite a bit . Without the weight of water , you have nothing to sell , therefore water is worth money per se . When jonky says ' Well , acthully , ya can't own water ' he's directly contradicting himself at best . At worst , he completely misses the point Maori are trying to make . Jonky's a multimillionaire idiot savant and he's taking advice from Nigel Latta with a PhD in brain fuckery which must surely make jonky one dangerous little mother fucker ! No disrespect to mothers or fucking .

Oh ! And one more thing ! This whole hideous process with regard to jonky and the National ( Front ) gubbament suddenly wanting to be the Farmers buddy . Inviting the shit spattered Clumps to the Hawaiian Lu'au for a chop , a pineapple ring and a Stienie ? YOU"RE BEING CONNED FARMERS ! LOOK INTO RECENT HISTORY ! YOU WILL GET FUCKED OVER ! BEWARE OF YOUR OWN KIND ! THOSE IN POLITICS I MEAN ! WOLVES IN SHEEPS CLOTHING WAS NEVER A MORE POIGNANT SAYING ! WATCH YOUR BACKS ! ARE YOU DEEP IN DEBT ? THEN YOU"RE FUCKED ! I can't say it more plainly than that .

...and another thing and while I'm on the subject ;

" Our food systems belongs in the hands of many family farmers , not under the control of a handful of corporations . " - Willie Nelson Founder , Farm Aid #F27 # OccupyOurFoodSupply

That was why my dad was trying to organize a Farmers Union . To protect the Family Farmer , including his family from corporate tyrants especially evil scum bank-sters . Farming is a holistic endeavor and must NEVER be allowed to become corporatized . And borrowing development finance is in effect having your farm corporatized ! GET IT ? I reckon all this Treaty , SOE sell-offs and bully boy tactics are a sneaky way to test the resolve of us Kiwis . It's true , you can't own water but you really , really need to drink it . You can't own land but you really , really need to grow food from it and eat it . Seriously ! If you don't eat and drink , you don't shit and if you don't shit , you die . You have been told ! Fuck the Supermarket-sters . Go to your local Farmers Markets and learn to grow your own food . It's dead easy . I'm fucking serious ! Fuck the wank Food Bill ! I've eaten insects from road side stalls in Cambodia and I'm still alive . ( Although I do cluster around light bulbs of an evening ? ) As a kid , I've drank from the milking bucket . Just blow back the cow-udder dead skin cells and hair from the top and dip in a glass . Warm udder milk ... Uuuurrrgh ! ( Homer Simpson drooling sounds ) It seems disgusting now but you get my drift and I'm not dead yet people ! It's all controlling wankery ! Don't bloody fall for it ! Bugger duck shooting . Lets have an open day on nerdy geeks with clipboards who say they're from the Council ?