ACC an out of control kafkaesque nightmare 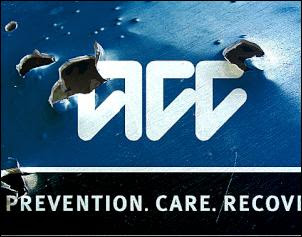 Secret Pullar tape shows she did not threaten ACC
ACC was under renewed political pressure over the privacy-breach scandal last night as a secret recording was released of claimant Bronwyn Pullar's meeting with ACC staff.

Ms Pullar - whose battle with the corporation has led to the resignation of ACC Minister Nick Smith from the Cabinet and a legal stand-off between his successor, Judith Collins, and Labour MPs Trevor Mallard and Andrew Little - took to national television to protest her innocence.

She and her friend Michelle Boag, a former National Party president who has supported her throughout the wrangle, hit out at claims by the corporation that Ms Pullar had threatened to use the private information of almost 7000 ACC claimants to help further her own ACC claim.

The information was accidentally emailed to Ms Pullar last August by the corporation.

In a meeting held four months later, ACC staff accused Ms Pullar of trying to use the information as leverage for financial gain.

But Ms Pullar - who attended the meeting with Ms Boag as her support person - secretly taped the encounter.

Last night, TV3's 60 Minutes interviewed Ms Pullar and played part of the recording showing she made no such threat. The link between the accidentally released information and its possible use by Ms Pullar in the media was made by one of two ACC staff members in the meeting.

This story was always about how the ACC use a kangaroo court they own, the 'Dispute Resolution Services Ltd', to deny and knock down via vilification anyone who pushes for their compensation rights. The appalling bullying of Bronwyn by ACC should anger every NZer. The lengths to which ACC have lied, vilified and broken the law by leaking private details is a horror story that demands heads roll, and the iPredict stock are suggesting that's just a matter of time now.

We are seeing an arrogance on behalf of ACC that should be deeply concerning. They actively decline people requiring help, through their own negligence they release confidential papers and when called on it, bully and intimidate a woman who has an existing complaint against them.

The real question here is that if Pullar was treated this shockingly despite her highly ranked network of friends, how the hell are NZers with no such connections being treated by this faceless monstrosity?

Judith Collins should dump her ego driven defamation case that will go no where and actually focus on reigning her Ministry in.

Dreams are free. It suits the National Govt well to have an unpopular and dysfunctional ACC, making it easier to privatise over scant opposition.

@Bomber,,,I haven;t actually read your post in detail but whatever it is you are hopping along in madness avout - Quel fucking Surpris!
Masters of the Universe!. These are just those from the admin vranch of an incompetent gubbamint relying on their longevity by suppressing a majority. IT was always going to end in tears.
I did see the 60 mins thing.
A I Watched, I thought to myself - NO WONDER JONKY or English, ot Bennett or any number of others want to engage in an intelligent debate.

History COULD just repeat - (its actually trending that way)

The natives are getting restless (bless 'em).

Why has it taken so long for the ruling class to wake up to that fact?
)Especially when most Hobbits are STILL asleep).

@ Richard Christie . I agree . It could be argued that judith collins will be actively sabotaging ACC for a mates rates private insurance scheme ( scam ) . I can hear the drool from the vicious jaws of the insurance industry dripping onto the slaughter house floor . The national party , those fiends and liars , they'll stop at nothing because they're plump and comfortable and seemingly without threat . I gleefully comfort myself with the fact that one day . One day they'll go too far . As for you poor sick and injured people . Ask yourself . Where's our fucking money ? Why are you on a hideous and demeaning waiting list ? Where's our money !