Why Key's $65 million more for youth mental health is disingenuous 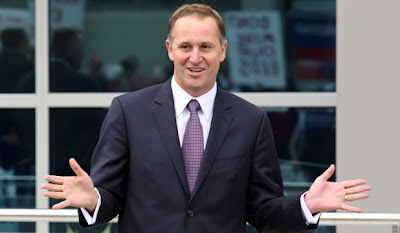 Speaking to the University Youth Health & Wellbeing Symposium in Wellington this morning, Mr Key said New Zealand's youth mental health system had many strengths, including a dedicated workforce that was doing some great and innovative work, "but it also has weaknesses".

"It is not as well linked together as it could be and there are gaps that we have a responsibility to fill."

I have argued for some time that this Government can not pretend to not know what the impacts of their austerity policies will be on NZers because we have had these polices before in the early 90's when National once again embarked upon a privatization and bennie bashing agenda. One of the unforeseen knock on impacts of mass lay offs, benefit restrictions and high youth unemployment was a tripling of our suicide rates in the 1990s and as National waltz down this ideological 20 lane motorway once again, it seems disingenuous of the Government to spend millions on the symptoms rather that treat the cause that they are causing.

$65 million for youth mental health is like taking an aspirin for a gunshot wound.

It's a win, albeit a very small win for Sir Peter Gluckman, someone who has constantly called for Key to take the plight of NZ youth seriously. His sterling advice sadly hasn't been embraced and he's been relegated to front footing symptom policy rather than challenging the free market slash and burn the Government are adopting which is exacerbating the stress.

As unionized workers get attacked by vicious employers, as state power is suddenly increased and condensed into the hands of the few while civil rights are eroded and as the poorest members of society are forced to do with less for an economic recession they had no hand in making, the damage being done to the next generation living in deepening poverty will exact a terrible price on our communities that borrowing for tax cuts can't ever justify.

We have NZ Police using creative redefinitions of how a crime is reported to give junk crime stats and the Social Development Ministry disqualifying beneficiaries from benefits making them no longer measurable turning them invisible to the unemployment stats. A generation of un-New Zealanders.

NZ is in a lot of trouble and the Government seems to be willfully ignorant of it.

yes
I also remember that we have been here before, with divisive and cruel social results.
thank you for your articulate anger

Indeed we have been down this path before...

What was that someone said about those not learning from history being doomed to repeat it?