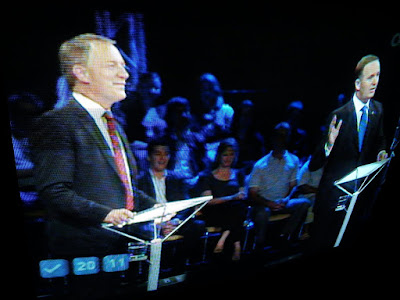 Key's weakness on promises - like GST and also his refusal to pull out of the war in Afghanistan - were targeted and there was some pay off. However in TV-land and in the media coverage afterwards this debate is not a game-changer for Phil the way it needs to be to really claw back National's big lead. However it hasn't damaged Phil at all and the potential for a total Labour meltdown (due to caucus in-fighting over the leadership) seems off the cards now so they ought to pull more than 30%.

Although it is a complete travesty and a collusion for the two big parties to have their leaders avoid debating with the "minor" leaders it is, I have to concede, also useful to have the only two people who could be PM after the election going head to head in a long format such as this TV One debate. What isn't nearly so useful - in fact a damned distraction - is the modern folly of cutting serious and intense interchange with sideshows, other people and most pointless of all texts from viewers. That fluff adds nothing. And having Jon the pointy-headed lefty and Clair the witless righty add their commentary immediately afterwards is patronising - as if the viewers are too dumb to draw their own conclusions that they need academics to tie their bloody shoelaces for them as well. Once upon a time they just had the debate and then later in the news they showed sequences - they didn't need endless commentary during and after.

The one thing that didn't come out of this debate was Key messing up. If he fucks up then that big lead looks as stable as the Rena. And it isn't just National that would suffer. The amazing spectacle of the United Future leader and the Act leadership (both Brash and Banks) constantly emploring people to vote for their respective parties because they will support a "John Key-led government" is remarkable. The level of personalisation is unprecedented.

Would you consider the "dynamic environment" argument that Key used to justify his failure to live up to pre-election promises to be a bit of a clanger? If so, how damaging would you expect it to be?

He pretty much said "I'll make promises but don't expect me to live up to them" during the debate.