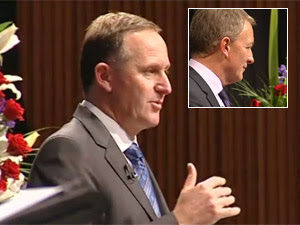 On Wednesday, Goff and Key went head to head in their second leaders' debate for Fairfax Media in Christchurch. While this was not a televised debate and lacked the 1 million plus audience of the first leaders' debate on TVNZ, this was streamed online and available for viewing later giving Key a performance that may just be a king hit to Goff in this election.

The decision to have a leaders' debate is a US style of public debate, and not without its caveats. This is one reason that the UK only had their first leaders' debate last year. Televised leaders' debates are a tough call for politicians, and they are actually a very bad format for attempting to convey policy (perhaps leading to Jon Johanssen's admission that he could really only tell the difference between the politicians when they were talking on Afghanistan in the first debate). As Phillippe Marek argues in his 2011 work Campaign Communication and Marketing, in the US there has been the development of an awareness of how little policy can be conveyed during these debates, and that campaign advertisements are often better for conveying the facts. Commentators tend to focus on the gaffes, the triumphs and general elements of televisuality, including the appearance of politicians and the way that they address the audience through the camera. Postmodern politics is surface not depth, hence why we have more analysis of what Goff using the phrase 'liar' means, or Key using the phrase 'dynamic'. If policy is the domain of the televised advertisement, than surely Labour are winning that realm of debate through the slick advertisement that opened their campaign which contrasted with a vampirific and lifeless Key in front of a fake audience.

However, last night's debate highlighted the strengths and weaknesses of having leaders' debates. Largely unchaired throughout the middle with the host not intervening at all, Key and Goff's debate escalated in theatricality in a performance that left little doubt as to Key's ability to argue and maintain a rapport with his audience.

The debate began rather pedestrianly and focussed on the government's role in Christchurch. Key explained that this has been a difficult term for the National Party and that they have had to face so many disasters that have threatened the economy: the financial crisis, the bill for Christchurch and the Rena. Goff attempted to gain the favor of the Christchurch audience by talking about how National's response had been inadequate. Pitching himself as the leader that would tell the truth, this came to bite Goff later in the debate when Key hit him up on how late his policies for revenue kick in and whether they would be able to return to surplus by 2014-2015. Shouting "show me the money", Key demonstrated his skills in debating and left Goff floundering to explain how the revenue would be created. This is a politician's worst nightmare: the nature of televised debates means that soundbites can be pulled out and screened over and over again throughout the campaign. While Goff is extremely lucky that this did not occur on the night of the TVNZ debate, the pure theatricality of Key in full flight may yet be a defining moment of the election. While elections should be fought on policy, the reality of it is that most people do not have the time to read through all the releases and assess it, so these televised debates become one of the key ways of assessing who to vote for. Although both parties appear to be fudging their ability to grow the economy, conveying Labour's message this poorly against Key's debating performance is a blow that will hurt Labour's ability to grow in the polls.

Labour have said this morning that they are confident in their figures, and the pressure will now be on Cunliffe to pull through for the RadioLive debate tonight, which has far less audience but will be listened to by political pundits who will then set the agenda for much of the discussions to come over the next two weeks.

Its amazing that on the same day that unemployment reaches its second highest point ever in a decade (and in the month where the Rugby World Cup which was supposed to deliever us economic nirvana) taht teh main discussion point is John Key yelling out 'show me the money'.

I wonder how we will be thinking when we look back at this campaign in 3 years time.

what neither National's or Labour's figures take account of is the steeply rising cost of imported oil. Up 22% to $7,7 billion in the last year and $11 billion higher in 2015 if the trend continues. Meanwhile receipts from domestic oil are plummeting and no new drilling can fill that gap for 7 - 10 years

Yep, the Economist Intelligence Unit has just said that they are predicting growth in China to slump to 8% which will also cause a whole pile of problems.