New Zealand Herald: you are failing us 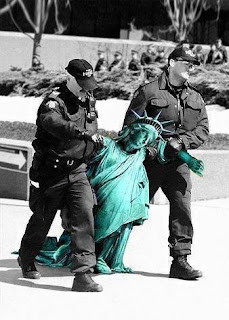 It's really hard to believe that there is currently the most interesting civil unrest since the 1970s going on in the United States, and there is not one article in The New Zealand Herald on it. Stuff.co.nz has several articles, but the Herald has not even one. Yes folks, elk spotting in the Appalachian country matters more than actual news. The Herald were fast on the uptake following Egypt, but there seems to be some kind of editorial agenda going on here that major news is just not being covered. I know the World section is somewhat of an afterthought in the Herald, a couple of pages at most, but this is ridiculous. Regardless of your perspective on the protests, it is the job of newspapers and journalists to report news, which in this case they are simply not doing.
If editorial coverage of news is selective for the Herald, at this point the logical next question is what else are they not covering? And what else do they cover but with an editorial slant?
Is this the point that we are at with journalistic standards of objectivity in New Zealand? That major news can fall by the wayside due to editorial slants? Where are the ethics in this? Or to put it another way, why would you read this newspaper anymore if it is clear that there is news that they are simply ignoring?
When a protest movement spreads from three cities to 52 cities in the course of a day on Twitter, I expect news.
In the interests of news as a public sphere which generates debate, it is clear the unpaid bloggers must step in. Here are a selection of links on the protests for those who would like to read actual international news as it happens:
Police arrest protestors on Brooklyn Bridge
Wall St protest shuts off half of Brooklyn Bridge
Success of Occupy Wall Street not easily measured
Live news feed of protestors marching on Police Plaza from The Guardian
Occupy Wall St recaptures the radical imagination
Jailed for covering the Wall St protests
What's behind the scorn for the Wall St protests?
Yahoo blocked links until they were caught out, and there is talk online of Twitter being blocked for Wall St links.
If you believe that international news is something you expect to hear in your newspaper, regardless of your political stance, please email the editor by clicking here and demand coverage.

Wow, I just watched the Police arrest a girl that looked all of 14...
Just wow,

The human microphones are awesome :)

Any word of anything in NZ to show solidarity?

Perhaps it is just evidence that we have now truly entered the world that necessitates the citizen journalist,it's up to all of us to spread this as much into the mainstream as possible trough spamming friends and family by e-mail, facebook and twitter. Make The Heralds failure motivate us to make them irrelevant.

Yes, loudspeakers are banned. Freedom of the Press started tracking arrested journalists but their link has gone down within 30 minutes - two from NY Times at least. Some talk of marines protecting protestors from police at 10pm NY time. Also unions about to come out. National Lawyer's Guild is offering free advice to protestors.

I imagine the talk of Twitter being blocked is probably very true... http://bit.ly/nRG73b

Phoebe, the media also seems to have "overlooked" the protest yesterday, in Wellington, against the Police surveillance Bill. Lucikly, an acquaintance of mine (an ACT supporter of all people!) covered it and sent me a pictorial report: http://fmacskasy.wordpress.com/2011/10/02/1-october/

Dan Carter's groin was the lead item on TVOne and TV3 on Sunday evening. I switched off and went to the internet for my news.