Man tries to jump into Parliament
The incident sparked a fiery exchange between Labour and National MPs - Labour MPs afterward were outraged by John Key's reaction in the immediate aftermath, claiming Mr Key yelled out it was Labour's fault and made a throat slashing gesture at Labour leader Phil Goff.

WTF? Key claims a man who attempted to self harm himself is actually 'Labour's fault' and then he makes a throat slashing gesture at Goff? Jesus our Prime Minister is an offensive clown isn't he? Topping this shit cake off is Key's bullshit excuse that he was actually talking about Labour's criticism of his over spending on the Diplomatic Protection service? How unbelievable is that excuse? When Key yelled 'It's Labour's fault' - what exactly was Labour's fault? Labour criticize his over spending on the DPS and it's their fault someone tries to hurt themselves????

Where the hell does Key get off with this crap?

What could justify making a throat slashing gesture at Phil Goff for an event that had all the implications of an attempted suicide if the guy had actually fallen?

What a nasty vicious little piece of work our Prime Minister is when he is caught off guard. 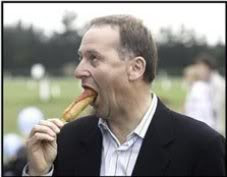 What the hell. This is Tea Party territory here. And it's our own PM doing it?

If we lose the RWC will that be Goff's fault as well?

Well his Merrill Lynch buddies didn't nickname Key "The Smiling Assassin" because deep down he was a really nice guy.
Is not NZers love affair with Key very telling of the character of the majority of Nzers? What have we become as a nation that we continue to sanction and cheer for this evil snake and his den of vipers?

What surprises and horrifies me is the number of my intelligent , well trained , highly paid , professional friends and acquaintances who love the little shit ! Well... love is a strong word . More , they fatalistically believe he's the man for the job , on the day . Besides , they reason . Who else is there ? And that's a good question . Flaccid Phil ? One of the flaky Greens or some Zombie from ACT ? Once , when I started foaming at the nose about our corrupt political regime , the rantee asked ' Ok , if you managed to overthrow the Government and booted the lot into Wellington harbour who would you replace them with ? ' I thought ' Fuck ! You know what ? That's a good question ! ' After much pondering , I believe I have an answer . You make the politicians , Left wing / Right wing / Greens / ACT , who ever , it doesn't really matter , do what we voted them in for . And that is , to take care of us . Here's the kicker ; If we can't make them do what we voted them in for ... they can , and will , do what ever the fuck they like . To us , and if it's for a dollar as in this contemporary context , against our best interests . People should be more worried that key and his minions can do anything they like , when ever they like , to whom they like for what ever reason they believe fashionable at the time and there's NOTHING you and I can do about it ! That's what we should be worrying about ! Our powerlessness ! Our total inability to be able counter attack this cunning , sneering , inner-circle , mincing , ponce and his hierarchy of arse kissing sycophants all sniffing around keys wallet ! We know who he is and where his agenda lies . How do we make him dance like a chicken on a hot plate ?

..... Seeing him sit there in his chair with his hands down his pants kinda made think of Berlusconi, fat, lazy, out of touch with the people, arrogant oh and a pig! Makes Act look like angels?? The guy is desperate! Clutching at straws because he hasn't got anything positive to contribute politically or what he likes to give us, aspirations!! Nothing tangible or real just la-la land pipe dreams! Get rid of this clown in November!