When a farce becomes a Police State 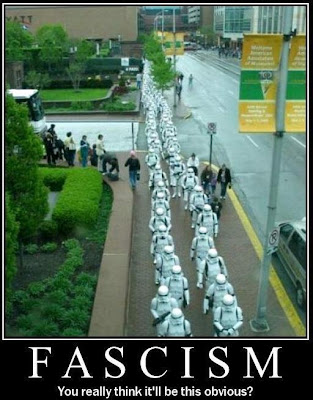 Let me see if I can get this completely straight.

Following the Urewera fiasco headed by a Police Commissioner who had previously chased a coven of satanic witches in Christchurch (which convicted Peter Ellis in one of the worst miscarriages of justice in this country's history), the Supreme Court throws out the case against most of those arrested in the Urewera case because staggeringly it turns out that the Police based their paranoia on evidence they illegally gained.

So what is the response from the Government? Even though the cops have been caught out spying illegally on citizens, there is no apology, no offer of compensation, their eye watering response is to ram through under urgency retrospective legislation making the illegal spying legal!

Back it up here - the response to the fact the Police illegally spied on NZers is to ram through law making that spying legal? That isn't a democracy, that's the foundations of a functioning Police State!

The Police say this puts at risk 50 other cases. So what you are saying is that the Police are currently illegally spying on 50 other NZers and because the Police break the law so often, we should just ram through retrospective legislation to let them spy on us legally???

Where does John Key get off with this shit?

The Search and Surveillance Bill is deeply controversial. It will allow the Police to spy on anyone they define as a 'gang'. The word conjours up Mongrel Mob, Headhunters, Black Power, however the definition of a 'gang' is actually just 3 people who know each other. It will be Greenpeace members, Amnesty International press people, Oxfam supporters and anyone else our paranoid cop force decides to lash out against.

If the Police have evidence of a crime then they present that to a Judge and get judicial oversight for a warrant, this Bill allows the Police to go on bloody fishing expeditions into the private lives of us, their citizens. A State should not have that type of power, how on earth can a society that jumped up and down about bloody power saving lightbulbs and water saving showerheads and not smacking your kid as the Nanny State Monster coming to take away your coke cola and McDonalds, yet not a whimper when the State grants its Police force unparalleled spying powers?

No one wants organized crime 'winning' in any sense, and we should do all we can to stomp the evil they do out, but this legislation doesn't do that, this legislation gives vast new powers to spy on all of us.

I joined the Auckland Council of Civil Liberties because of this Search and Surveillance Bill, so concerned was I by the vast and unchecked expansion of Police power. Tumeke has noted this Bill from its birth and have recorded over the years our growing horror that none of it has been watered down.

To allow this largest erosion of civil liberties in NZ history to be forced through under urgency using the Police illegally spying on people as the justification is just an insult too far.

How can a smile and a wave pacify so many?

mate; This bsatrads have been spying in people x a very long time, in this case they got caught, thats all, but for many of us who are no one we get shit.Your country is been a Police state for a while, and its run by Greg O Connor and his mates in the only legal Gang in the land. Good for the so called Opposition of the maori Party to the Raids and the aftermath. SHAME

The fucking media is totally ignoring this issue, the leading story on 3 news last night was an All Black with a drinking problem. This fiasco wasn't even mentioned until after the first ad break. NZHerald.co.nz doesn't seem to think its a big deal either. I seriously didn't think the government would have a nerve to pull this shit!!

You said it all 'Unemployed Reporter'. I mean who are they trying to bluff, with all this nonsensical rubbish. Did they really have anything on video from the Urewera Raid, and if they did, they have let them off, why? Was it because 'there was none. nothing' ! ! !

You said it all 'Unemployed Reporter'. I mean who are they trying to bluff, with all this nonsensical rubbish. Did they really have anything on video from the Urewera Raid, and if they did, they have let them off, why? Was it because 'there was none. nothing' ! ! !

In answer to your final question...It actually cannot be allowed to happen..'There are many roles that people play and many images that they project. There is, for example, the "nice" man who is always smiling and agreeable. "Such a nice man," people say. "He never gets angry." The facade always covers its opposite expression. Inside, such a person is full of rage that he dares not acknowledge or show. (Alex Lowen Fear Of Life).
Remind you of anyone? Saw his mask drop over the Wannaben case yesterday & realised why he did get the 'assassin' tag.. Hear you loud & clear re the 'gang' definition reminds me chillingly of Maggie T days and now I AM truly getting worried.