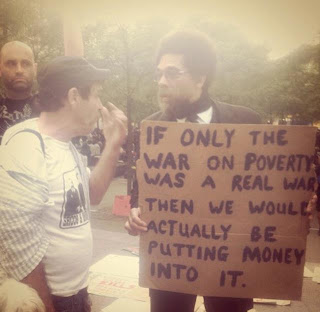 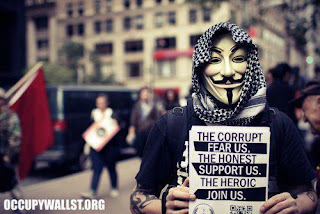 Today is day 12 of the #OccupyWallSt movement, otherwise known as the 99% movement. The protests have had little coverage in their initial days by mainstream media, and are only know beginning to be discussed. Initially there were only around 1,000 participants that turned up. Unable to get close to Wall Street due to a lack of permits to demonstrate and the heavy handed police treatment that saw 80 people arrested on Saturday, the protests looked like they would fade away. However, the widely circulated image of a policeman pepper spraying two protestors who had already been cordoned aside by police seems to have given the protests fuel, and the arrival of Michael Moore and Susan Sarandon to give speeches seems to be providing additional publicity. Based in Zucotti Park, the protests seem to be spreading very quickly, testifying to the power of social media in mobilizing people and also the anomie a section of the US population is currently experiencing.
The protests seem to be spreading virally very quickly, regardless of mainstream news coverage, and I expect the weekend will bring more news as more people protest. #OccupyBoston began yesterday adding to the protests in Chicago and San Francisco, along with a march of a couple of hundred airline pilots in full uniform on Wall St. Watching Twitter yesterday, over the span of seven or so hours, the protests swelled from a few cities to 52 cities in total organizing protests or currently occupying financial districts. Reports are coming in that many police are also dissatisfied with their pensions and support the protests in principle. One of the many websites that has sprung up to document the protests, Occupyinfo, shows people attempting to organize protests in Canada, Australia and the UK in solidarity with Wall St. If this continues to spread, this will be the largest protest movement of unrest since the student protests in the 1970s. While the numbers of protestors are still small, this is incredibly significant due to its spread. 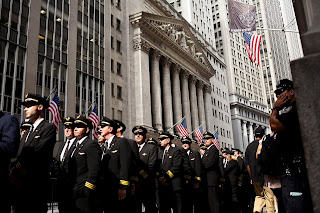 In the absence of a mainstream news media documenting the protests and providing a narrative, there has been much debate over what the protests are about. As Keith Olbermann details below, the US media ignored the protests for the first few days, with complaints already emerging at Yahoo for blocking 'Occupy Wall St' as a search term.

While the mainstream media has been focussing on the protestors not having any identifiable narrative or singular concern as to why they have hit the streets, there are clear themes that are emerging. The movement is named the 99% in reference to the fact that 1% of the US population control the wealth. This is hardly surprising - unemployment is officially at 9.1% nationwide, but it is as high as 32% in some cities. This does not account for the number of people underemployed in casual work, which is around 1 in 5, contributing to conditions where the next 20% are no doubt worried about the economy and their work. The first dip in the recession saw many people drop from middle class to camper vans during the foreclosures, and the bailout of large financial institutions contributed to a feeling of general malaise on both sides of the political spectrum. Well-founded fears about the US economy are being reinforced by get-rich gurus such as Bill Gates calling for a Financial Transaction Tax (Hone Heke tax/ Tobin tax) and Warren Buffett stating that the wealthy need to be taxed. Under these kind of economic conditions and fear, the emergence of resistant discourses is hardly surprising.
It is also clear in the Scribd.com open document for the communique of the protestors that worries about oppression in a heavily monitored democracy are a key concern - the first demand is for a participatory democracy. This is hardly surprising in an environment where access to the political sphere requires the amassing of huge campaign funds to outperform your opponent, or a country where many still feel scarred by the outcome of the Florida election. The protests were inspired by the Spanish acampadas and the Egyptian uprising and initially promoted by the Canadian-based Adbusters magazine and the elusive hacker group Anonymous. Egyptian pamphlets on non-violence are being circulated, and many of the symbols of the Arab spring are clearly identifiable. The mask of 'V' from V for Vendetta, a movie which examines a future British society controlled by 'Big Brother' surveillance, has become an international symbol for Anonymous and for freedom of citizens, and is being found everywhere from globalization protests in the UK, to Egyptian and Libyan videos. The mask symbolizes the struggle that citizens are currently engaged in with their states over information technology, a struggle that has seen the development of a Cold War-type technology struggle between citizens and their governments. This technology in the Arab world has seen states deploy the tracking of citizens to quash dissent and their identification, aided by technology companies that sell tracking technology at world fairs. For example, Nokia and Vodafone implicated in the Arab Spring in aiding dictators, or the online arrests of citizens through Facebook as in Bahrain or following the London riots. The US police responded by enforcing a 150-year-old law banning the wearing of face masks to arrest people. On some of the protestors the keffiyeh is also making an emergence to signal solidarity with the Egyptians.
The strength of the movement will depend on what happens over the next week or so - watch this space. With these types of movements spurred by social networking, it is the speed of spread rather than the numbers that give a good indication of the traction. With more than 1,000 people arrested for protesting outside the White House over the tar sands, and 1,800 arrested in New York City for protesting the Republican Convention in 2004, the spread indicates that people are beginning to break through the fear of protesting.

This is precisely the sotrt of news that that be presented on our media - but which has been sadly lacking. Too much "bread & circuses" a-la RWC and bloody aquatic birds.

It seems that the Arab Spring may yet take root in the West - the greatest of ironies - as westerners question who rules our societies.

It is obvious that democracy in the US is so 'broken' that no amount of voting will correct the structural faults in their system.

The US may yet face it's Second war of Independence - and this time the Right will not win.

Here are some interesting links, especially the interview in the first..
http://www.truthdig.com/avbooth/item/chris_hedges_occupies_wall_street_20110926/

By the way, Keith Olbermann is terrific!

Why don't we have someone like that in our media (no offence, Bomber - your programmes are brilliant, but in a different way).

Our Ameruican cuzzies have Olbermann and what do we get - Paul Henry?! Oh dear god... (facepalm*