The Nation and q+a review 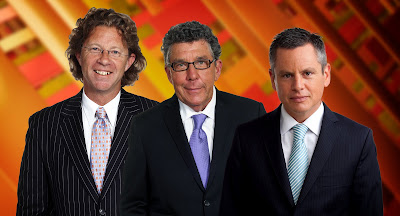 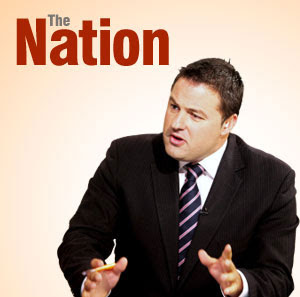 The Nation
No boys today, it's that women from Firstline. I like Firstline, it was the way I told TV3 to do their breakfast show rather than the 3 ringed circus of Oliver Driver and the boringness of James Coleman. Straight one person news was always going to be a better bet than the crap they originally went with. I pointed this over to tv3 time after time, they only got around to following my advice after they had lost millions. Private companies huh?

Don's on trying to desperately explain why he isn't desperate cutting a deal for marginal seats. What the idiot mainstream media do not get (and she certainly doesn't GET IT) is that National are panicking. Why are they panicking? Because they know the political polls are bullshit, but because the msm rely so much on those warped opinion polls, they are missing the panic that is starting on the right.

So the right don't even believe in TV3s and TVNZs bullshit brainfart cheap polls, and because the msm are blinded by those same brainfart cheap telephone polls, they can't question them and so are missing how panicked National are that they won't have

I was thinking of going to the Comedy channel, but The Nation has a piece on lobbyists, and if there is one thing you can trust The Nation to do, it's the prepackaged current affairs stories, and as usual, The Nation do a brilliant investigation into filthy lobbyists.

Corporate Lobbyist Mark Unsworth is on, he was on the tvnz7 Backbenchers show, he scoffed at Mana launching in the way I predicted, Gosh I cant wait to do the 'i told you so' when i catch up with him again. This clown was the one who took the PMs Chief of Staff on a Vegas piss up, his claims that he is as innocent as the driven snow is just bullshit.

Booze baron is on claiming he doesn't do anything evil - that's a lie, it was his industries lobbying that shut down this Governments pathetic response to our nations alcoholism.

That lovely Mai Chen is on, that awful Matthew Hooten is on. They BURN Matthew bad but pointing out his vested interests in promoting climate denial bullshit.

Next is some fossil they've dug up to explain why sucking up to the US is a great idea. Once again the msm miss the real issue - the US fear we are falling into China's sphere of influence, hence the draconian Free Trade Deal with America and they're symbolic pissing in our territory with the Marines now coming.

All of this is missed by The Nation, how about you rename the show 'the blind leading the lost' - seriously how does this get NZ on Air Funding? Thankfully the panel is on, here is one place the Nation could make inroads with brilliant selections, they've got Simon from Metro and Patrick Smellie, they have interesting points of view to add.

They all point out how crazy and racist ACT are. Hilarious TV. What Smon misses is that the National Party Maori Party stitch up was to make National look more centrist than they actually are. The relationship was always fake, he doesn't understand that, and when Mana contest those Maori electorates, watch how Maoridom will punish the Maori Party.

Well done The Nation, I only considered turning over once, that's a record.

Holmes is doing his best as Israel's representative on NZ TV. Monologue is mildly amusing.

Guyon on sucking up to John Key while Key sucks up to America.

How dare Key justifies Afghanistan, one day you are going to get a real interview John and such tripe won't be allowed to pass unchallenged.

The first thing Key will do if reelected is send the SAS back into Afghanistan, only fools don't believe that. TVNZ still misses that America is doing this to counter China, The Nation missed this as well. I pointed out earlier this year that we would be looking at a symbolic visit from the US Coastguard to sidestep the nuclear issue so the US could mark it's territory against an encroaching China.

This point is utterly missed.

Key now defending that we've given up an independent foreign policy to slavishly follow America and Israel which is why he isn't going to do anything about Israel once again trying to harvest passports.

Now he's defending the Free Trade deal where US corporations will be able to sue the NZ Government in overseas tribunals, why the hell would we ever put ourselves in that position? To keep America happy. Like The Nation, Q+A miss this dimension of what is actually happening.

Fran and Jon are the panel. That should be some intelligent discussion at last.

God TVNZ are so safe and baby boomer ain't they?

Where did you get those numbers on landline penetration?

Your sounding nervous billy, your beloved msm polls are based on bullshit and when you look at these landline rates you should be nervous because you can see how easily warped the results are. I've been making this point for sometime now Billy, lift your game princess.

Good question, where did those figures for landlines come from?

Your numbers on Landlines are bullshit Bomber.

Where is your evidence on landlines, and i mean real evidence, studies, links etc?

You go on about your role in holding the powerful to account, how about you front with your evidence.

Whoa there, Whaleoil dude; those figures you quote are from 2007 - FOUR years out of date.

Got anything more relevant and accurate?

Try actually reading it before jumping to incorrect conclusions next time. Then you actually look relevant and accurate, instead of like a foolio.....