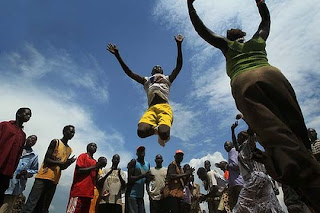 Today is South Sudan's secession day and its celebration of being the world's newest nation state. For a region with such a long history, it has certainly had a difficult ride. The colonization experience for Sudan was not an easy one, and like the division of imaginary lines around the borders of new nations, this has been the source of much conflict with the grouping together of many different groups giving rise to conflict between the relatively richer, drier, and predominantly Arab north and the poorer, more arable, oil rich and predominantly sub-Saharan African South. As a country whose history highlights the 'Scramble for Africa' writ large, with the British, the French and the Belgians claiming portions (the latter of whom had a policy to teach Africans that they were lazy by cutting off one hand), Sudan's struggles following independence are further proof that being rich in resources is not necessarily a winning formula for nation states in a world which is starkly divided between the haves and have-nots.

Like its neighbour the Democratic Republic of Congo, which has lost the largest number of casualties since the Second World War and killing around 5.4 million people despite having an estimated US$24 trillion dollars in resources, being mineral rich for much of the world does not translate into profits, rather it is the countries that it is distributed to who tend to benefit. In Sudan's case, China had the ability to exercise diplomatic influence over the frequent killings, as it received nearly two-thirds of Sudan's oil supplies since legislation under Clinton in 1997 that made trade with Sudan punishable. This is not to say China is the only country that was benefiting from Bashir's reign of genocide: British companies were in there as an export site, and with individual businessmen fronting oil deals for China, even attending an 'Opportunities in Sudan' forum in late 2010. This trade was occurring at the same time as Britain remained a signatory to the 2005 Comprehensive Peace Agreement that affirmed their commitment to resolving conflict in Sudan and Bashir faced charges at the International Criminal Court. The US contingency that was sent before the referendum urged that the North and South must decide on their oil agreements, signaling clearly that the interest in this region was based on a lot more than their international responsibilities.

Suffering through two civil wars (1955 - 1972 and 1983 - 2003), contemporary media has largely suspended the Sudanese as being hostage to ethnic conflict rather than the result of a larger processes of resource division that have gone on over centuries. As Ibrahim Elnur argues, the British borders entrenched the inequalities that had been perpetuated during the slave trade in the region. These processes are largely glossed over by international media, together with the role that international trade and the presence of minerals holds in promoting conflict, an approach that is symptomatic of the coverage of sub-Saharan African nations. As Emmanuel Fru Doh argues in his work Stereotyping Africans: Surprising Answers to Surprising Questions (2009), Africans are used as "props in the West's fantasy of itself. And not only do such depictions tend to ignore the West's prominent role in creating many of the unfortunate situations on the continent, they also ignore the incredible work Africans have one and continue to do to fix these problems" (29). Fru Doh draws from the work of Uzdinma Iweala, who argues that the relationship of Africa and the West is now based on the intermediary of the emaciated celebrity rather than the missionary church (28). In this case, it was the work of celebrities like Angelina Jolie, Don Cheadle and George Clooney that has drawn attention to the horrible conditions that many South Sudanese have been under. While this trope has been repeated so much it is now even parodied by Bono himself, these people have drawn attention to the plight of many in a fragile environment where lives are often influenced by the schizophrenic and sensationalist attention of a global media economy that is largely dominated by the west. We can only look forward to the day when Africa has its own pan-African network like Al-Jazeera, the latter being a great example of the change that the ability to represent one's own people can give.

As we celebrate the birth of our newest nation, we must remember the role that resources have in shaping the conditions of our humanity. We must continue to give scrutiny to the operation of states in trading. The risk of conflict is precarious, with analysts already pointing to the underdevelopment of infrastructure in the South and news reports coming out of South Kordofan. Sudan will also be affected by the burgeoning East African food crisis affecting up to 10 million people.

Happy birthday, South Sudan: we wish you all the very best.

To donate to the East African food crisis, please go to Oxfam by clicking here.