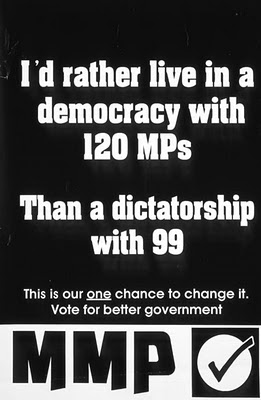 So the usual list of National and ACT Party right wing money men are in the list of founding members of this anti-mmp front group, but so is the name of Alex Fogerty....

Here is a selection of the Kiwis that are already members of Vote for Change Society Incorporated. 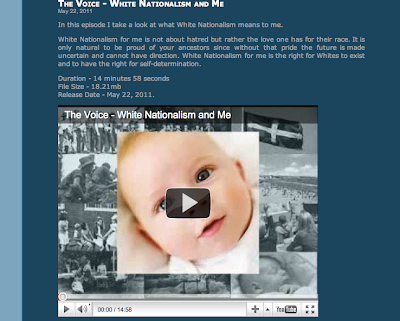 I tracked down Alex Fogerty on his facebook site and asked him if he was the same Alex Fogerty who was a founding member of 'Vote for Change', he said he was...

...IF what Alex Fogerty has said to me is true (and seeing as he has supported delusional white supremacist websites in the past, then reality could be a stretch) and he IS the Alex Fogerty founding member of 'Vote for change' then that leads to the question, isn't it intellectually skanky to allow white supremacists to take an active role in a campaign to dismantle MMP which in turn leads to less political diversity?

UPDATE:
I spoke to Jordan Williams from 'Vote for Change' by phone who confirmed that Alex Fogerty has been asked to resign in the wake of this Tumeke post and put out a press release moments after speaking with me.

Bomber, there are other founding members who you have not named.

They've taken his name off their 'about' page, but google still has a cached version http://webcache.googleusercontent.com/search?q=cache:zWo3K12o4hYJ:www.voteforchange.org.nz/about/+%22Alex+Fogerty%22+site:voteforchange.org.nz&cd=1&hl=en&ct=clnk&gl=nz&source=www.google.co.nz

why does "Skull & Bones" spring to mind?

Good work Bomber - he's friends on FB with half the national party!

Any voting system which allows political parties to decide who gets into parliament should be vehemently opposed. If the current system isn't ditched altogether, it should be at least modified to get rid of list candidates. Proportionality could be made up instead from constituent candidates who lost their seats, starting with the ones who lost by the smallest margin. This would also eliminate the need for two votes at the ballot box.


Vote for Change is investigating allegations made about a member of its organisation. The allegations of Mr Fogerty’s previous membership of a white supremacist group appear to be true and he will be asked to resign his membership immediately, or have his membership revoked if he chooses not to resign.


Many political organisations some members have pasts that are not entirely to their credit, or the credit of the organisation they belong to. In the 2008 election Labour lost high ranking list candidate Stephen Ching and National lost New Plymouth candidate Clem Coxhead, who was replaced by Jonathan Young ten weeks from the election. Both men left their roles with the respective parties because of issues with their past that their parties did not know about.


Vote for Change has found itself in a similar position as both Labour and National did in 2008.


Vote for Change will not be commenting on this unfortunate matter further.

Intersting how they try to distance themselves!

When did Bob Harvey become evil? Somewhere between Mayor of Waitaks and day one of Waterfront Development Agency?

I don't understand the "breaking News" Quelle Surpise! part of this post. Nice to know that Jordan w is such a follower of Tumeke though.

Steven Ching was not on the Labour list in 2008. He'd effectively left Labour after he was dropped from the list in, if I recall rightly, the 2005 election. Ching is now a founding member of the Chinese backed Asian party that first appeared in the Botany by-election.

Has anyone actually bothered to ask me if the allegations are true? No.

Who are you Delos?

I wonder if Bob Harvey still wants to be involved?

Delos is the current head honcho at ANN the Australian white supremacist site Alex was linked to.

Cameron Slater raised a very pertinent point on Citizen A the other night. One which Mr Bradbury never dealt with.

Many of the pro-MMP crowd seem to be focused on ad hominem attacks on people involved with the other side of the debat rather than debating the merits of MMP over the proposed alternatives. Essentially they are engaging in gutter politicking of the worse sort, one in which if it was being done by anyone they didn't agree with they would be , (rightly), jumping up and down about.

I like MMP. I think it is probably the best political system for New Zealand, (albeit with some tweaks). However that does not mean that I think anyone who opposes the use of the system here is some kind of 'evil' anti-democratic stooge of big business that needs to be personally attacked, which is the simplistic analysis offered up by many. This view just reflects badly on those that run with such attack lines.

Well... The Campaign for Change has been structured to make it easy to dismiss criticism in exactly the manner that Cameron Slater is doing.

If you visit the official Vote for Change website, there is no information being presented on alternative electoral systems. All there is is nebulous rhetoric on wanting 'more accountably' or 'a fairer system'.

Slater is saying 'ignore the fact that we are all rich white businessmen and politicians with a lot to gain from a return to FPP or a less proportional system, and get lost in communicating the differences between MMP and 4 other complicated electoral systems to the general public'.

Gosman said... " Many of the pro-MMP crowd seem to be focused on ad hominem attacks on people involved with the other side of the debat rather than debating the merits of MMP over the proposed alternatives. "

I disagree, Gosman. When looking at the anti-MMP/pro-FPP/pro-SM lobby, it serves a useful purpose to determine who is behind a pressure group so that we can assess their agenda.

If, as Bomber suggests, that most (if not nearly all) of the VfC are National Party supporters of one form or another - then let's put it on the table for all to see. It is another aspect of clarity and transparency in the on-going debate.

VfC talk much about transparency and accountability. That is a good thing.

If the case for MMP can't be made on the merits of MMP over the other options and you have to resort to silly ad hominem attacks on your opponents to try and win your case do you really think MMP is the answer???

I for one can think of a multitude of reasons why MMP is the best electoral system for New Zealand. I don't need to resort to intellectually lazy personal attacks on people.

You are making a rather gross assumptions about what the agendas may or may not be. You have no real hard evidence. Given you seem like a lefty I assume because the people in the anti-MMP crowd are more likely from the right you automatically assume that this issue is a left versus right debate.

I could be as intellectually lazy as you and look at some of the supporters of MMP, (such as Mr Bradbury), and assume that MMP is only supported by quasi-Marxist economic illiterates. However I would be wrong to do so. Just as you are wrong to try and prejudge the motivations of the anti-MMP crowd without hard evidence.

So, Gosman. In the interests of intellectual rigour, care to shed light on the electoral system that *you* support, and maybe offer up a analysis down of the pros and cons, vs MMP?

Go over to The Standard if you want to see my views on this. Tumeke is not a place where any level of debate on subjects is encouraged.

Really? You mean all the National supporters on VfC is not "hard evidence" that it is a front organisation?!?! Isn't that kinda like suggesting that "just because Organisation XYZ is full of Scientology members, that it isn't a front for the Church of Scientologists?

Remember, if it quacks...

"I could be as intellectually lazy as you and look at some of the supporters of MMP, (such as Mr Bradbury), and assume that MMP is only supported by quasi-Marxist economic illiterates." (4/7/11 2:42 PM)

And you'd be wrong. Campaign for MMP has representation from the Act on Campus group, as well as others.

"Go over to The Standard if you want to see my views on this. Tumeke is not a place where any level of debate on subjects is encouraged." (4/7/11 4:03 PM)

Rubbish. I've read comments here that savage some of Bomber's ideas. And even Catrhy Odgers has posted here.

So your assertion that "Tumeke is not a place where any level of debate on subjects is encouraged" is not only false, it's a cop-out.

As you pointed out, "if the case for MMP can't be made on the merits of MMP over the other options" - then let's see what your alternative is.

Let's discuss the issues instead of personalising it as you;ve done.

Are you up for it?