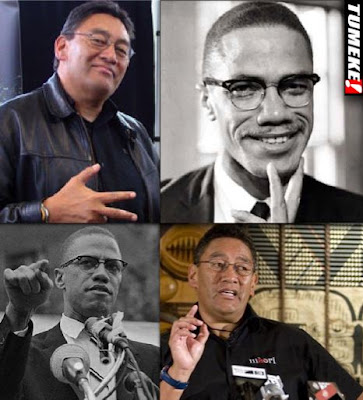 Well, well, well. What do we have here? It's the 'I told you so' blog folks, and for the haters, suck it up, I've earned my bragging rights all the way to the general election.

So it was 10 months ago that I looked around the political landscape and just couldn't see a way to defeat an ACT-National Government. I started blogging about a party to the left of the Greens using a sub 5% threshold strategy with an electorate seat as a way of changing the Parliamentary math, talked with some staunch lefties and predicted on TVNZ7's backbenchers predictions show November last year that Hone would use the Te Tai Tokerau electorate to launch a new maori left party.

And now it has come to pass.

Despite Russell Brown's Osama Bin Laden smear, despite 4 unprecedented anti-Hone editorials in the NZ Herald, despite Guyon Espiner from TVNZ predicting it for Kelvin, despite the bias of Duncan Garner, despite the bias of Government propagandist David Farrar, despite Russell Norman's attack on Mana, despite the bullshit brainfart cheap telephone polls that claimed Hone was only ahead by 1% when he was actually ahead by over 7%, despite the Labour Party machine, despite the Maori Party machine, despite Cameron Slater who claimed that Mana would never launch or win (by the way Cam - you now owe me $200, dump your shrill calls on your tired blog of me being a coward after calling the hateful ACT Party candidate Cathy Odgers on her bennie bashing anti-woman spite, and pay up on our bet you deadbeat convicted criminal), despite John Key supporting Kelvin, despite far right hate blogger Cathy Odgers writing off Mana, despite know nothing right wing blogger Clint Heine - DESPITE ALL OF THAT - Hone and Mana won!

The spin from the mainstream media trying to explain how they got it wrong AGAIN in the Te Tai Tokerau electorate after calling it neck and neck in the Brown-Banks election has begun. The spin is that the poll was close and the result was close so they weren't so wrong. Bullshit - their cheap telephone brainfart polls said 1%, it actually was over 7% - they were out by 7%! The msm called it wrong twice, let's not allow them to sidestep this fact as they pump the very same cheap bullshit brainfart telephone polls to try and claim John Key has 60% support. The mainstream media are using these cheap brainfart telephone polls to manipulate public opinion, not reflect it.

What does the Mana win mean?
The wider ramifications for the general election from this by-election are massive. It is the first narrative of how John Key gets defeated. If Mana is able to gain 85 000 votes from a voting pool of 340 000 beneficiaries and 300 000 minimum wage earners, that's 3.5% which is 5 MP's which changes the Parliamentary math. Labour + Greens + Mana could defeat Brash + Key.

If Labour can knock out Dunn and if Mana run against the Maori Party in the Maori electorates splitting the vote, Mana could pick up a couple and the rest go to Labour.

Mana is now a political waka being launched from Te Tai Tokerau that will contain the aspirations of Maori, beneficiaries and minimum wage earners. Mana is about class and it's about the electorate of poverty gaining a voice, something the mainstream media doesn't comprehend and can't understand.

Winners
Mana and Hone: In the face of overwhelming opposition they have won. Just consider the level of opposition from the Prime Minister to the Labour Party machine, to the bullshit opinion polls the msm use to manipulate public opinion rather than reflect it etc etc etc. That he won by over 7% is an incredible victory in the face of such overwhelming odds.

Labour:
With such a strong performance, the Labour Party show that they can win in the Maori electorate seats again, and most importantly the voting public now have a narrative of how the progressive left defeat Key with Labour plus Greens plus Mana.

Losers
David Farrar: David is the propagandist of choice by the National Party and the NZ Herald help him. It is his cheap brainfart telephone opinion polls he sells to the National Government that has convinced them in hubris that they can win the election out right. As you read, National Party bigwigs will be poking their favourite stats techno gnome in the ribs and will start demanding, 'you are sure these polls are right eh?' and he will be nervously grinning and assuring them it's all in the bag. David is sweating it out now as increasingly it appears his polling methodology doesn't work in a recession.

Mainstream media: They all parroted the Maori TV poll using David Farrar's failed cheap brainfart telephone polling methodology EVEN THOUGH they had been collectively burnt by the Herald Digi Poll claiming Banks and Brown were neck and neck. The same tired baby boomer pundits giving the same tired ill informed baby boomer opinions clog the airwaves and they all got it wrong. The mainstream media deserve the contempt of the public.

The NZ Herald: this filthy right wing rag deserves special attention. 4 anti Hone editorials and appointing David Farrar unchallenged as their political blogger makes the NZ Herald the NZ version of Fox News. They can't even admit they were wrong when you look at the bullshit that Armstrong spins today claiming Hone is the loser. Unbelievable bias.

Maori Party: They were crucified, and they can't be trusted. Why give them the Maori seats back when they will only cut a deal with National again? Mana must run in their electorates now.

What the broader progressive left need to envision is the genuine structural change to NZ a Labour + Greens + Mana could attain in November.

Let's just hope the Hone & Mana can keep focused on a 'class' war rather than a 'race' war.

My ancestors came from the Lands of the Long White , Pink Nippled , Fluffy People . I'm so white I have to bake on a sun roasted beach for two weeks to go from translucent to ghostly ! My ancestors sailed from a bleak , windswept swamp , all the way down to the the exact opposite side of the earth to another bleak , windswept swamp where they knew instinctually they'd be miserable thus promptly settled down to a hard life on the land after digging out a damp hole to milk an equally depressed cow in . Two generations of udder fiddlers and morbid misery doomsayers later and here I am to say this ! Hooray for Hone Harawira and the Mana party ! Well bloody done ! There is hope after all ! I hope Brash is writhing in his nest . Key will be trying to avoid the awful truth by taking a nice warm money bath . As for the rest of them . Once they come down from the cave they're hanging up side down in , they might start to realize they're an endangered species and if there is a God , their greedy , vulgar , graceless days are numbered .

Hone has always cornered support of the angry Ngapuhi dispossessed, and it is interesting to see it was those who voted for him as a Maori Party candidate who did not vote. Davis scored almost exactly as in the general election.
Try as you might, Harawira is not the voice of the left, he is the voice of Maori sovereignty and anger against the Pakeha, and he has never ever shown any interest in the problems of the poor who are not of his ethnic group.
A racist street bully, more in common with Adolf that Michael Savage I suggest.

I don't see how Mana's victory in Te Tai Tokerau will impact Peters' election chances. If anything, he is helped by it.

The fact that Harawira and Mana were able to beat Labour's machine politics from outside of Parliament does give Peters some encouragement for standing in a vulnerable Labour seat.

Been on The Standard. The Labour Party blog. My God, the utter racism thats displayed over there about Hone.

And they got the cheek to pompously define themselves as "left".

Labour 40 years me. It won't be 41 years. If it was just a bunch of wankers on a blog site I wouldn't take it out on the Labour Party. But Phil Goff's a dirty little power seeker who's never really had a proper job.

He knows nothing about real life And you tell it beaut Bomber.

good call bomber congrats you were spot on.

Who the loser now?

Writer Of The Purple Sage said...

You've neatly sidestepped the FACT that Hone's "sweeping mandate" has actually turned a 6,000 majority into a 800 marginal seat!
Take off your brown-tinted glasses: "he who wants to be king" is only interested in the game for the gain.
Keep your eye on Matt McCarten too: when Hone-bro DOES fall, guess who'll leap into the breach?

I disagree, I've tackled that head on. I've pointed out the percentages - the msm claimed Hone was only ahead vy 1% - it was out by as much as 7%. If National win the election 48% to Labour's 41% you would be screaming landslide, not whisker Purple. That's the bit you are sidestepping.

Writer Of The Purple Sage said...

A win is a win...but sitting on a 'marginal' is not the comfort zone The Bro was hoping for.
His conciliatory post-win sea-change also shows that he accepts (or at least Matt McC does!) he can't progress much further politically without piggybacking on those he's already shat on!