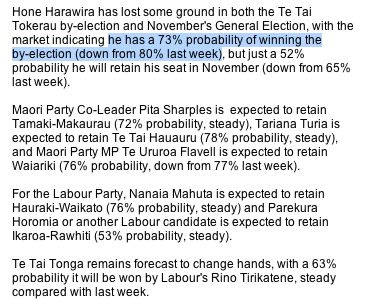 I gave my odds for the by-election, on 9 May, and said I'd update after the Native Affairs debate. A diligent commenter said my $1.20 works out to an 83% chance - if you want to compare that to the latest iPredict market report above. Please note I put this out before the other parties had confirmed their candidates so Kelvin Davis is in the "other" category. Kelvin performed adequately in the debate and he has the Labour Party machine and all the parliamentary services-paid resources in full swing behind him, so he's going to be the real competition. So updated (old odds struck through): 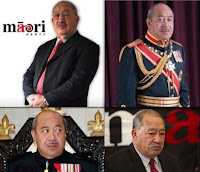 Solomon Tipene hasn't got a show and won't attract enough votes to affect the outcome for the other candidates. Tipene's total vote will be less than the winning margin between Hone and Kelvin - that's how bad it looks for the Maori Party after seeing his performance at the debate.

The Maori Party have been attacking Hone in more and more direct terms over the course of the campaign and I've got their latest, personalised and increasingly desperate outburst from Te Ururoa Flavell entitled “Some things don’t change”. Sadly selling out to the Tories and spreading lies themselves is all the Maori Party seem capable of these days. Te Ururoa is - quite frankly - full of shit, and it's dribbling out all over the show like he's taken a laxative overdose.

Look at the Maori Party smear sheet for proof they are on the ropes, lashing out and have no answers:

Since when was it the kaupapa of the Maori Party to ignore what their own members want and pass National's version of what is confiscation legislation? All of the stuff in the Party's constitution about manaakitanga etc. is a sad lie because they have not practiced it - in fact they have conducted themselves in a contrary fashion. They decieved their own members about what was happening with the confiscation bill to keep the ugly truth of their sell-out a secret until it was too late to stop them - that's not a kaupapa worth following.

The only "gross exaggeration" is that it is probably more than 90% who are against it. And again the outright lies: the original repeal bill was Rahui Katene's and was only discharged a few weeks ago as a matter of fact. The bill the Maori Party passed was a National bill - written by the Nats, led by the Nats, running to the Nat's own timetable - and Te Ururoa himself at a hui I was at in February conceded as much when I put it to him. "Due access" to courts (but not the Maori Land Court!) means next to nothing if it is only for the crumbs the Maori Party accepted on behalf of Maori. Using flimsy polls taken at a point where little information was available to people and when the Maori Party's own spin was only beginning to be challenged is a pathetic crutch to use to support their unsustainable argument.

OK, maybe 99% then, 98%? Of course the Maori Party voted to raise GST - these are weasle words they are using - it was a Nat idea, but they voted for it. They have no answers to Hone's criticisms, their tactic appears to just simply try to bullshit their way out of their dire situation and it just makes it worse. Is this unsophisticated lying part of the Maori Party kaupapa now that Hone has gone? To keep saying that black is white and hope everyone is blind?

And back to arguing that the crumbs under the table are loaves in our hands. Strange they bother to set up the Mana Party statement with their rebuttal if they never address the crux of each question. They don't answer the question Hone poses - those Pakeha kura get $30m... what do Maori get apart from a chance to be one of the few eligible to get through the gate? 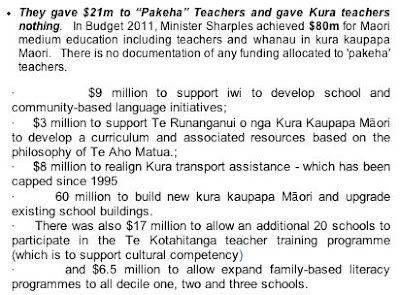 No documentation of funding to "Pakeha" teachers - well that's half the problem too isn't it? Billions can go to Pakeha without comment because it is never recorded as such, but because Maori initiatives or dimensions within the Pakeha "mainstream" government systems are tagged as "Maori" it's always a big fuss. No fuss the Crown operates and close to fully funds hundreds if not thousands of Pakeha total-emersion schools - not a word. Anyway the money mentioned was specifically about teachers, not schools, so the Maori Party have to revert to deliberately misunderstanding to blur things. Only $17m for teacher training programmes are given as a comparable counter; but because neither the assertion of what the Mana Party is saying or the Maori Party response is properly fleshed out it results in confusion rather than the scoring of a point, if indeed there was a point to be scored.

Yeah, and $5m of Tariana's increase to Whanau Ora in the budget was stolen out of Pita's portfolio of Maori Affairs let's not forget, so they are losing here when they say they are gaining over there. The figure Hone uses (I think) was the initial sums for a full Whanua Ora roll-out that Paula Bennett refused to yield out of her spend at MSD. It's the difference between a pilot scheme (which is what Whanau Ora seems to be) and a normal part of government-funded social services (which it was envisaged to become).

Not sure what this relates to because it's so poorly articulated. Funny because so many of the Maori Party - including Te Ururoa - are educationalists. What has this got to do with the budget? The further down the worse it gets. They have become incoherent at this point.

So they aren't even contesting that one are they? That's a yes then isn't it. Te Ururoa has explained on several occasions that his move to discipline Hone - and let's be clear that meant getting him out of the party - was personal.

"Personal" is the word he used when I asked him why - "it was personal." He was the instigator of it and I'm certain he did that because he feared Hone would derail the Foreshore and Seabed confiscation sell-out that Te Ururoa specifically (and the other caucus members) had already signed off on in secret with the Nats and when they realised that Hone would organise under them and launch a flaxroots membership rebellion against them they worked to have him expelled. In the end they settled for a non-aggression pact where they parted company on as good terms as they could.

Now the gloves are off because the Maori party reneged on that deal and are standing against Hone. Those fools, those old fools - they deserted their own kaupapa and they deserve every bit of the kicking they are about to get.

Heh...Got no time for the Maori Party huh cuz ?