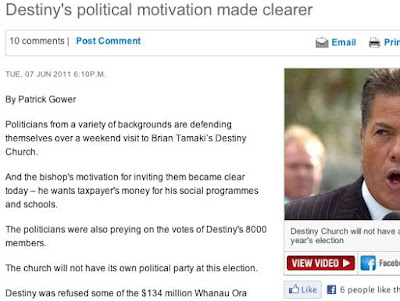 John Campbell said it was "put together by Mihinirangi Forbes" - that means it was on the 'Native Affairs' show on Maori TV the other night. But just like the Rotorua penny-divers story a few weeks ago this one too looks as though it will go uncredited - everyone will think it's a Campbell Live exclusive. Not so. It's Carol doing her old mate a favour. But the problem in not acknowledging it is that it does no favour to Maori TV. Maybe they're OK with that, maybe the relationship has reciprocity in other, unseen areas.

When I saw it on Maori TV - last night I think it was - I couldn't believe the Pope managed to get them all together. That was more astounding than the creepy laying on of hands bit where The Lord pressed on each of their chests while the MPs were held at their shoulders by his bodyguards (which I imagine G-d did to the participants without them knowing in advance what was going to happen, manipulated into it as is His MO).

I'm not concerned with the fact that some MPs were there - they are professional vote whores who probably rushed off to the Lesbian Atheists conference straight afterwards to pledge their commitment to their kaupapa - but what was impressive and frightening was how many showed and what that told us about His influence. The potential influence. They were using each other, but it was Jehovah that munched that mana.

The Alpha & Omega's arguments for funding had the unfortunately legitimate ring of policy consistency: He didn't seem to be asking for anything more than the institutional advantages the established religions have got out of the NZ government. 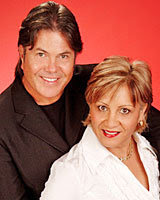 He is the Messiah we love to hate. And it's easy to be a hater when they have been winner of NZ's Creepiest Christian Couple for the better part of a decade.

... but when it comes down to it some parents living on the wrong side of the tracks would probably be better off sending their kids to a Density Brian-washing at one of his mega-churches than to leave them to their own devices, on the streets aspiring to be prospects for the Killer Bees, under the blurred gaze of the government's social services.

God is just taking credit for male rule. Its about the patriarchy stretching from the rural gentry down to the born-again Maori slaves. Its saving the heathen from the secular contamination of class struggle and revolution to throw out all the old shit. You got the hands-on routine wrong. Bish was restraining them while they took it up the ass.

I'm a Tamaki detractor in a big way, but the DC has done a lot of good. They actively have stopped a lot of wife and child bashing that schools and government haven't.

I think Tamaki has issues and insecurities and serious attachment problems with his mirror.

Even though we detest him and his methods, the guy may well have made the world a better place. Perhaps he could have made it a bit worse with all the gay-bashing, but we can't write him off.

Gotta swallow our pride on this one, libs.

The problem with calling dudes like this for what they are (hypocrites, to put it lightly) is that it only convinces them and their brethren that they are the Chosen People and that it is their lot in life to put up with the Romans giving them shit etc.

And Tim, you have gotten it the wrong way around with this: "He didn't seem to be asking for anything more than the institutional advantages the established religions have got out of the NZ government."

ALL religions should lose their funding, instead of letting Bishop Brian in on their rort. Surely he can put painting his house with unicorn blood for a week and spend some of his riches helping out his constituents instead of coming hands out to Pontius Pilate for some gold.

Rangi, Yes - I've blogged many a post on how religion and govt and education shouldn't mix. Labour's paying in 2008 for the capital expense of that Catholic school in Botany/Flat Bush (except for the chapel) for example is a gross subsidy for a cult - but my point is that not giving those breaks to Destiny is playing favourites and is inconsistent. It's a form of privatisation really - the govt. gives all that money that could have gone to state schools to private ones. National and Labour both do this.

If it was ABC, BBC, they would have totally acknowledeged. But Maaari TV, no. Pathetically, no.

Maori TV should tell them to fuck off if they don't offer the courtesy of acknowledging their great work. But knowing how kind and humble Maori are, probably won't happen. Shameful being kiwi sometimes.

Tugger Jones looked as if he would rather be back in his hotel room watching the "soap operas" paid for by the NZ taxpayers!