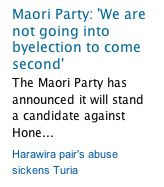 I heard this morning - at dawn - that the Maori Party had decided to attack first by ripping up February's carefully crafted non-aggression/accommodation pact and would be running a candidate against Hone. Those fools. Those old fools.

The Maori Party are at their lowest ebb in the wake of selling out so royally on the foreshore and seabed confiscation. It's mass dessertion and operational collapse here in Waiariki, so in the North it is difficult to imagine that they still have any functioning branches at all - although they will have many ambitious members who remain loyal for personal reasons who will form an electorate level committee, but without any depth. It's a bad look to break the peace - Hone will be glad they blinked first. Maori Party President Pem Bird reported as putting both his feet in his mouth instead of just one. Firstly he reckons they can win a by-election against Hone. That's just silly. Then he says the Maori Party don't care about youth because they don't vote! An extraordinarily idiotic thing to tell his voters.

He's right about not coming second - they'll probably be third if Labour run Kelvin Davis (but they would probably be wise enough to steer clear as they did when Tariana ran in 2004).

This tops off a shocker PR week for the Maori Party. On the Native Affairs show in Maori TV Hone and Pita Sharples went at it and Pita said he wanted to sit around the table with Don Brash in government! An extraordinarily idiotic thing to tell his voters. They are after old people's votes and they want to be in government with Don Brash. That's a political suicide statement.

Hone and the Mana movement need to get their admin balls lined up as they have to be pocketed in quick succession in order to get the movement into a registered party for the nomination. If Hone didn't have the organisational skills (and union muscle) of Matt McCarten behind him he couldn't be making these ballsy calls let alone be pulling them off. There is a high level of confidence that Matt and the others can get this done in time.

If you're confident of these numbers, you could make a bit on ipredict: it has Hone at 65% chance. You're giving him an 83% chance of victory.

The Party already has the numbers. The party is all go, what it needs now is more resources to have more of an impact this year.

Very exciting that things are all go.

Perzactly how naive are his supporters? A vote for Mana or anything attached to Hone is to vote in people permanently INELIGIBLE to be considered as a co-alition partner. He destroyed his own political career when his detailed inaccurate description of Osama-bro as someone who could be classed as a freedom fighter, against America (?), for his country ie SAUDI ARABIA, which banned him, his family of FILTHY RICH ARABS whom typicly shun him, and for his TRIBE (rich Arabs). Firstly, this does not show, for a lawmaker aspirant, sufficient respect for truth nor grasp of history this assumption all cocoa people must be oppressed in ways identical to Maori and by the same shade offenders. Would we want his impulsive twitchy fingers in a Prime Ministerial role controling armed forces. Second, the Americans we're in hock to will evermore prohibit any main party from getting in bed with the mouth. The disrespect shown to 9/11victims via HH's antics will not be forgiven, and demonstrates why Hone is not a person compassionate enough to deserve a bum on the back benches. Adults should see this man has removed any chance he had of future power, hero seekers will live in denial a while yet. The rebel vote may seat him but he'll have 100% less push than his Mothers legs if Brash was to get fresh with the Babe, after a wine or two.