The rise of corporate war mongers 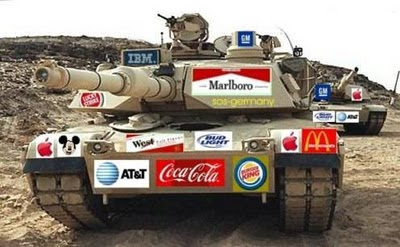 UAE's $672m foreign legion
The billionaire founder of Blackwater Worldwide, a scandal-plagued United States security firm accused of abuses in Iraq, was hired by the crown prince of Abu Dhabi to put together an 800-member battalion of foreign troops, the New York Times reports.

Blackwater are corporate mercenaries who have built an empire out of butchering civilians and enemy combatants alike, and are the must vulgar expansion of American military power.

The fact these corporate war maggots get away with murder is not a surprise, that it is so blatant is the shock...

US Contractors In Afghanistan Violated Gun Policy, Says US Military
KABUL — Four U.S. contractors for the company formerly known as Blackwater were not authorized to carry weapons when they were involved in a deadly shooting in Afghanistan this month, the U.S. military said Tuesday.

...and they continue their dirty tricks that give them the political power to fend off criminal prosecution...

Blackwater in Pakistan
ISLAMABAD — The notorious US security firm Blackwater has reportedly established a presence in the restive tribal belt on the Afghan borders to help the FBI and CIA track down Al-Qaeda and Taliban militants allegedly hiding there and protect USAID projects.

...and dirty tricks in Afghanistan to cripple rivals...

Blackwater Assumes Police Powers in Afghanistan – To Eliminate Rivals?
sarabeth at 1115 has dug out a rather astounding bit of news from an Associated Press story about yet another crooked Texas security contractor, this one doing business primarily in Afghanistan on a contract with USAID to provide security for construction sites and mine-clearing. The lede involves the usual folderol – accusations of over-billing in the $$Millions$$ and dubious hiring practices involving ex-militia - but deep into the story sarabeth caught this:

...and let's not overlook Blackwaters new friend in President Obama...

Blackwater Got Gig Protecting Obama In Afghanistan
Sen. Barack Obama has not been a fan of private police like Blackwater in war zones, and some news outlets even reported that they were spurned for his trip last week to Afghanistan and Iraq. But Whispers confirms that Blackwater did handle the Democratic presidential candidate's security in Afghanistan and helped out in Iraq. What's more, Obama was overheard saying: "Blackwater is getting a bad rap." Since everything appeared to go swimmingly, maybe he will take firms like Blackwater out of his sights, the company's supporters hope.

The danger of allowing corporate mercenaries to have this level of power within conflicts is obvious. The US Military is responsible to the US Government, Blackwater however is immune to prosecution and don't follow any rules when in battle. Their corporate and political muscle makes sure that they and their multitude of subsidiary corporations are never in any real danger of accountability...

Blackwater Operating in Afghanistan on Subcontract with Raytheon
For those of you who have been following the intricacies of the various ongoing Blackwater/Xe scandals (hard to keep up with indeed), the situation unfolding in Kabul is certainly on your radar. In short, four Blackwater/Xe operatives working for Paravant LLC, a subsidiary of Blackwater/Xe are alleged to have fired on a civilian car they say they saw as a threat, killing at least one Afghan civilian. According to The Wall Street Journal’s August Cole, “At least some of the men, who were former military personnel, had been allegedly drinking alcohol that evening, according to a person familiar with the incident. Off-duty contractors aren’t supposed to carry weapons or drink alcohol.”

The US military said the incident took place in Kabul on May 5. “While stopped for the vehicle accident, the contractors were approached by a vehicle in a manner the contractors felt threatening,” according to the military. At last one Afghan was killed and three others were wounded.

Now, there are many layers to this story, not the least of which is yet another allegation of Blackwater-affiliated personnel drinking and killing in a foreign war zone. (A drunken Blackwater operative was alleged to have killed a bodyguard to an Iraqi vice president on Christmas Eve 2006 inside Baghdad’s Green Zone).

What’s more, this represents the first public mention of the Blackwater/Xe subsidiary Paravant, but also the fact that its work was apparently buried in a subcontract with Raytheon, which in turn has a large US Army training contract in Afghanistan. “Raytheon’s use of Paravant is for a program called Warfighter Focus, a sweeping U.S. Army training effort valued at more than $11 billion over a 10-year period,” reports The Wall Street Journal.

The power and influence Private War Inc has created within American foreign policy is not new, but the level of unaccountable protection being offered them suggests America's outsourcing of violence to feed a multi-billion dollar industry on the blood of civilians is becoming the arnacho-capitalist neo liberal Ayn Rand wet dream of choice.