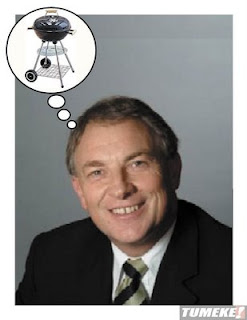 Labour's list is out. So is the Greens list, but I can't find an official link to either as they don't want to publicly debate what I take are still preliminary rankings for the final list. Rankings are a brutal measure that always seem to throw up more losers than winners. They would prefer people took their lumps and didn't have this sort of debate in public. Is this earthy West Coast vernacular, a statement of fact nonetheless, or just another embittered outsider finding excuses for their own under-performance? 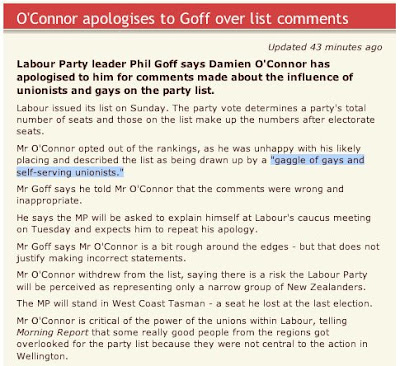 What an uninspired selection - especially the top 20. It could only have been more uninspired had O'Conner and Robertson et al been included. The non-parliamentary leadership seems just as inert. The presidents, Little and now this Coatsworth lady, are unionists who will be unable to tap the business sources Williams and Hirschfield tapped for money and their influence will tend toward more insular thinking and relationships and limited campaign funds.

Looking at Labour's list it starts getting wobbly at No.10 and doesn't stop shaking as it unravels. Nania Mahuta - on parental leave - hasn't done anything to earn such a high placing. Jacinda Ardern they must be desperate to hold on to if they've put her at No.13 - and they must not think much of her chances against Nikki Kaye in the pose-down for the Green votes in Auckland Central. Andrew Little parachuted in at No.15 has shown himself to be a gruff bureaucratic non-entity with no personal rapport or ability to communicate to the public. If the public or the party wanted safe, boring, grey men like Phil Goff to lead the party then Little will find himself at the back - not the front - of a very long queue headed by Cunliffe and Parker.

My comments in brackets refers to the barbecue Phil Goff nearly had once upon a time in order to take leadership of the party.

1. Phil Goff (gone at bbq in December)
2. Annette King (gone at bbq)
3. David Cunliffe (hosting bbq)
4. David Parker (does the cooking at bbq)
5. Ruth Dyson (might be there, but Marayan says don't bring her friends drunk-driver Ruth and get caught by the cops Ruth to bbq, so might not make it.)
6. Parekura Horomia (will talk his way into any bbq even though not invited)
7. Maryan Street (as long as it's not going to be a blokey bbq)
8. Clayton Cosgrove (would have preferred Chch or West Coast bbq, happy to be invited)
9. Trevor Mallard (not a bbq without Trev)
10. Sue Moroney (who? what's she bringing?)
11. Charles Chauvel (expected to bring something special)
12. Nanaia Mahuta (the Princess will be invited out of courtesy, but not expected to attend)
13. Jacinda Ardern (she's the future, she has to be there)
14. Grant Robertson (he's the future too, ditto)
15. Andrew Little (thinks he's the future, will turn up)
16. Shane Jones (thought he was the future, safer to have him at the bbq)
17. Su'a William Sio (if bbq in Auckland)
18. Darien Fenton
19. Moana Mackey
20. Rajen Prasad
21. Raymond Huo
22. Carol Beaumont
23. Kelvin Davis
24. Carmel Sepuloni (if bbq in Auckland)
25. Rick Barker
26. Deborah Mahuta-Coyle
27. Stuart Nash
28. Clare Curran
29. Brendon Burns
30. Chris Hipkins
31. David Shearer (if bbq in Auckland)
32. Michael Wood
33. Phil Twyford
34. Stephanie (Steve) Chadwick
35. Kate Sutton
36. Jerome Mika
37. Iain Lees-Galloway
38. Josie Pagani
39. Lynette Stewart
40. Jordan Carter
41. Kris Faafoi
42. Christine Rose
43. Glenda Alexander
44. Susan Zhu
45. Rino Tirikatene
46. Sehai Orgad
47. Megan Woods
48. Mea'ole Keil
49. David Clark

Good on Kate Sutton on her 35th rank - she will be in if Labour are competitive and their vote holds up. Amazed that David Shearer is so far down the list (No.31) given his recent promotions. It's like being a mate of Phil's doesn't count for anything!? And as for the 20th and 21st spots: Rajen Prasad - almost at retirement age? - and Raymond Huo - or Raymond Who? It satrts looking weak when the dead wood from the Clark era is rolled over a second time.

Compiling these lists must be a nightmare. The O'Conner outburst just the beginning of the friction. As for the bbq - it will be an Auckland/Union thing more than any other combination of factors. Cunliffe may host, but that doesn't mean he'll be leader either - his quibbling in the House and lecturing isn't Prime Ministerial. All I can say is that there's a lot of very good deputies in Labour's upper ranks, but no leader.

Moira Coatesworthy is as much a unionist as anyone who may be a member of a union is. These people used to in a better time be mainstream!

Jacinda Ardern is outstanding and a potential future leader. She deserves her high ranking.

Grant Robertson and Sua William Seo have huge gravitas and mana and there are a number of hardworking dedicated MPs there.
David Shearer volunteered to go low because he has a safe seat. Good on him.

It is a shame when the left start regurgitating right wing attack lines.