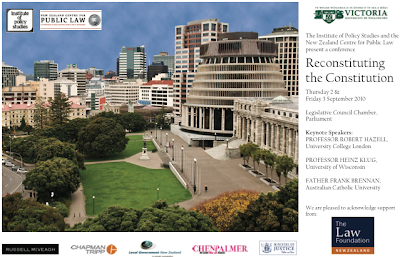 Reconstituting the Constitution talk/wank-fest will be amusing the Wellington elite for the next two days. As entertainment for the beltway intelligentsia goes this is the BDO. Sponsored by various carriages of the government's long legal gravy train - and held in the parliamentary building, I can't help but think it could all be conducted online for practically zero cost and maximum convenience.

The problem for the organisers would then be that a "representative cross-section of NZ society" (as they say was the aim of the 2000 conference) might actually be "brought together." That sort of inclusion is the last thing they would want. The meta agenda is to preserve the white-dominated colonial regime's Anglosphere/Westminster status quo - and notwithstanding the keynote speakers - that is obvious from the format, the programme, the leaders, the inevitable participants and the ubiquitous and mandatory "climate change" distraction.

The purpose of the 2010 conference is to build on the 2000 conference and discuss relevant issues that have arisen over the past decade. Domestic developments, such as the creation of the Supreme Court, the passage of the Foreshore and Seabed Act 2004, New Zealand’s involvement in the international debate over climate change, the controversy over the regulation of electoral finance, and the continuing debate over the design of the electoral system (including the merits or otherwise of proportional representation and separate Mãori representation), have all had an impact on New Zealand’s legal and political culture.

Although the Treaty of Waitangi will have to be mentioned it certainly is not centre stage, or barely on stage at all - it is relegated to the last item of session 3! I find that simply astounding. But we have Australia to the fore:

Two sessions on Australia and none - not even a mention anywhere - about the Pacific. This I find also to be astounding. 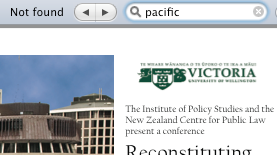 The Cook Islands and Niue are governments within NZ, Tokelau has had referenda to attain a similar constitutional position. They are NZ citizens, they have the same Head of State that we do (inside "the Realm of New Zealand") and constitution acts stemming from the NZ legislature. The definition of 'New Zealand' and the definition of 'Aotearoa' is to be discovered in these facts and must be dealt with to progress from one to the other. The conference fails to even acknowledge these crucial and developing constitutional issues. They would rather talk about Australia... twice.

'What the white elite think #2134098685923474' would be a more accurate description of this pol-geek, academic, lawyering wankery. To reiterate: this is entertainment - light entertainment.

Its all about easing the relationship i.e. sucking up with the Aussie big brother to stop the backsliding - futile because that is the nature of the relationship - and not with the poor cousie bros in the Islands who can kiss kiwi butt.

I see that the three key note speakers at the Constitution fest are all foreigners Tim.
Well maybe not, we can't call an Australian a foreigner really can we, maybe yes he's a Catholic,

I personally would like us to be ll think soon we are be the eigth State of Australia .
Imagine that Tim the NZ economy sucking on Queensland, maybe Bob Katter as new President, and senior lawmaker.