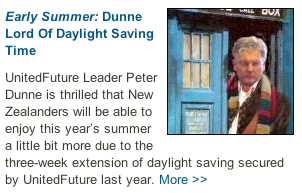 Just a few days to go before daylight savings time and it has been hailing this morning in Auckland.

Sometimes you only know where the right place is after you've gone past it. This is the case with NZDT. It is a week too early. I've followed Homepaddock's campaign to put daylight savings back to the first week of October and concur with all her main points. And if it is a week too early for Auckland then it must be at least a fortnight too early for Otago.

The extra daylight hour in the evening is unusable because of the low temperatures and inclement weather. There is no added value in that. The hour of daylight lost in the morning is a real pain for the early commuters who are plunged back into darkness and is a negative value. So we have no added value in the evening and a loss of value in the morning. The right thing to do would be to take it into the first week of October.

I am comfortable with where the modern-day Maui moved the end of daylight savings - to the first week of April - but suggest that our Time Lord demi-God has got it a week wrong on the Spring side. This will be the fourth Spring under Dunne's early start and I agree with Homepaddock that there is now enough evidence and experience to say we should revert to where it was before (ex-1990) - the first Sunday in October.

I'd prefer to go back to the original dates - late October and mid March.

(The April change gives us in the south only a few minutes more morning light than we get in the very middle of winter).

But I'm delightd someone from the North Island agrees September is too early.

Even a week or two's delay to the start would be better than what we have now.

Why not have different dates for each island? Maybe the North Island could shift across the dateline too so we can share the American day instead of always being a day ahead. Or run on Sydney time since they rule us from there anyway.

Look, I don't know why it's called Daylight SAVINGS, I don't ever seem to be able to save any and use it in the Winter when I really need it to do things like dry out the washing!
Will there be a withholding tax on any daylight I DO manage to sae or will there just be a GST component when I do spend it?
Anyway, all this extra daylight from this idea just fades the curtians faster doesn't it ?

And who's going to pay for the crack this causes in the Space/Time continuum anyway?
If the Nats have anything to do with it they'll turn it into a job for some Council Controlled Organisation to paper over each year and charge the ratepayer huge consultancy fee's.

remember why daylight savings was first invented? to get us plebs to spend more money. therefore:

and Mr Dunne, we are still waiting for you to follow through on your promise to remove GST from rates - tax on tax - classy

All I can say is bring it on! I can't wait for daylight savings, and I will greatly enjoy being able to do things outdoors after work.