National take advice from fringe political miscreants - how does that 'change' feel? 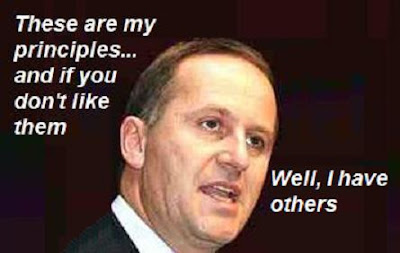 Heather Roy and Rodney Hide have kissed and made up in the way a vampire Shark and a fully automatic machine gun kiss and make up. ACT’s reconciliation is as insincere as Peter Dunne’s toupee and while the blood dried on the steps of Parliament, it was revealed that the extremist 90 day right to sack powers were pushed through by ACT against the wishes of National’s own Labour Minister, Kate Wilkenson.

This desire by the Government to follow extremist advice is apparent on the Welfare Razor gang where the researcher Peter Saunders writes Islamaphobic fiction in his down time and in the ACC policy to deny rape victims counseling based on research from professor Felicity Goodyear-Smith, a woman married to the son of Centrepoint community leader and convicted paedophile Bert Potter. Her work has been described as a rapists charter and an apologist position that denies any real harm from sexual abuse.

Who will the National Party get to base inappropriate advice from in the future? Ronald McDonald on school breakfasts? Fox news on public broadcasting? Koran burning American Christians on cultural tolerance?

Brothers and sisters, I don’t wish to sound cynical, but in the exact same way frosted sugar with extra nicotine flavour wrapped in deep fried bacon rinds would be better for breakfast than Paul Henry, a kick in the head with a steel capped boot would be better than listening to the advice of these no social conscience fringe political miscreants.