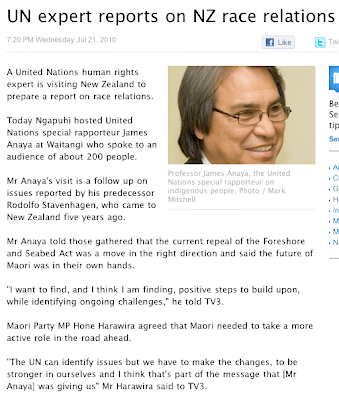 Some have questioned the value of the visit, but I guess it is better than nothing. He's been looking forward to it since the NZ government stopped being a failed state and signed the UNDRIP (at the insistence of the Maori Party). 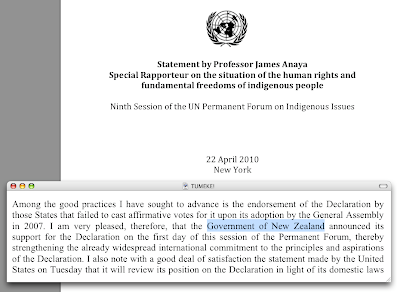 Love the idea of a visit by the UN, but I've had a lot of trouble trying to find out about this mission for some months. They have had naught on the UN websites about this. The first I saw of any detail from the Special Rapporteur was from the usual lefties via Scoop on Monday: OHCHR - and that's dated Friday. So I emailed as soon as I saw it on Friday, now it's Wednesday. How can anyone talk to him if they aren't going to respond to email. So it's all a bit late for any interaction at this point since his itinerary is already looking over-booked as he zips up and down the country for the week.

UPDATE | Friday 11PM: Attended Prof. Anaya's press conference in Auckland this afternoon. Conspicuous lack of journos - because it was a Friday afternoon. Auckland stops working quite early on Fridays esp. media, but I would have thought a UN investigation on an aspect of the nation's human rights would have demanded a more comprehensive coverage than I saw represented at the press conference. I've complained in this post about the lack of advance notice and the sparse attendance may speak to that lack of awareness (more than Aucklanders' legendary slackness). He was quite vague during the Q&A after making his fairly vague remarks. Will make a separate post on this.