TVNZ and 50 years of TV in NZ. There's a lot to celebrate for the institution and also for broadcasting in general. TV3 is just over 21 years old and forms part of the story - especially as regards its effect on the two state channels and why they changed to a solidly commercial practice - but they will be left out of tonight's extravaganza.

It is also a good time to think about the future: 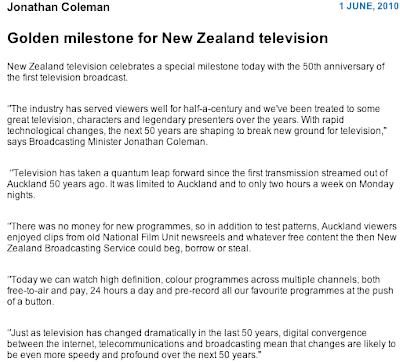 The Minister has ordered TVNZ to deliver the "Heartland" channel of 50 years of state TV exclusively on the SKY TV pay platform - undermining TVNZ's investment in the Freeview platform. The channel starts in an hours time on SKY 17. It is hardly conceivable that a more tragic and self-destructive present could be opened on such an anniversary.

To use the Head of Digital's own assessment it will mean a "slow suicide" of the TVNZ digital channels (whose charter funding is set to run out in a few years). Great news for the SKY shareholders and another concocted reason to sell off the state broadcaster, so we can see why the National government did it.

To support internet access, the government has announced plans to invest $1.5 billion in rolling out broadband across the country. Within the next 10 years we want to have ultra-fast broadband available to 75 percent of New Zealanders. Clearly, digital information is going to become even more important in the future.

Real high-speed broadband internet connectivity will be the break through that will shatter the Sky-Freeview cartel. At that point households will be able to get high quality video straight off the internet and onto large screen TVs without having to use someone else's bloody box. Expect them both to fight some ferocious rear-guard actions to stop this happening. The NZ On Air criteria - for example - is the current stymying action the insiders use to restrict competition and funnel funding to a very select group of broadcasters and producers and is very successful in locking people out. It is supposedly to ensure high quality, whereas what it actually does is ensure high salaries and high costs. Expect that to be defended like it was Stalingrad.

"Real high-speed broadband internet connectivity will be the break through that will shatter the Sky-Freeview cartel. At that point households will be able to get high quality video straight off the internet and onto large screen TVs without having to use someone else's bloody box."

Utterly preposterous even by you standards Tim. Cable TV is having a resurgence overseas because people just can't be bothered having to work out how to download stuff. They'd rather buy a box without having to navigate through complex interfaces. In fact TV as a mass media is once again a popular mass media.

I'm afraid you're a little behind on trends.

I see the Heartland on Sky deal as the payoff for having prime on Freeview. Is that how you pulled that off Johnny C?

Anyone care to elaborate / shoot that one down?