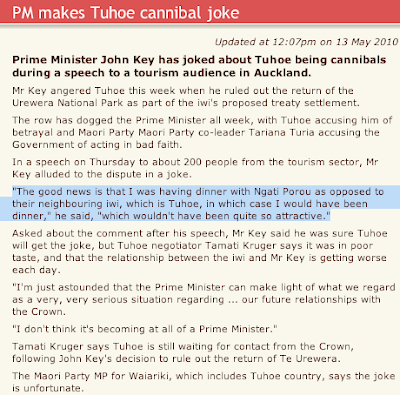 I heard this leading on RNZ midday news. What a buffoon this Key is. Either he's Prozacked up to the eyeballs, wafting around ('from cloud to cloud' is something like what his deputy has described him being) without paying attention to what is being written for him and without sensing what is and is not appropriate behaviour... or, he is every bit as racist as a white student in 1981 Christchurch who would have loved to have gone to a South Africa Apartheid XV v. NZ rugby match but who thought it wasn't enough of a rational allocation of his resources at the time to buy a ticket. I'm thinking both.

The PM - at a tourism function - thinks he can get away with shit even drunk comedians wouldn't pull. FFS.

How is Tuhoe supposed to react? How would any Iwi react? In the middle of Treaty negotiations. The leader of the government that invaded and confiscated and killed its way into and over your land - this leader tells a tourism conference that you are cannibals, just days after unilaterally rejecting the main plank of any settlement. How is Tuhoe supposed to react to this?

Well, Murray McCully, or whoever is the lack of brains behind this stunt must value the opinion of Tuhoe far, far below the opinion of the sort of muppet listening to ZB that the Tories think would appreciate that great, gaffawing, knee-slapping joke.

Let's remember that John Key punished his senior colleague, Lockwood Smith, for his foreign worker comments before the election. What Key has done is a bigger blunder because it was entirely scripted and not a reaction to some superb baiting by the interviewer. Key has no excuses for this; but the only one who can reprimand him is himself [5:20PM: and I've just heard him on RNZ saying his remarks were "self-deprecating". Idiot. 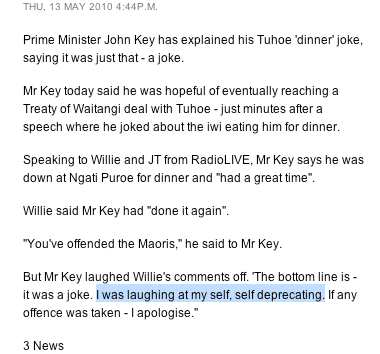 Idiot on so many levels. He's treating real life like he was on Letterman. Fool. His goofy/dork/bloke routine is looking more like George Bush by the day - it is unbecoming of a Prime Minister. Key is still very much a blank slate and it can be cast as a fool if he keeps this up.]

Is this a fitting way to celebrate 74 years of the National Party?

They'll be very angry that anything like this should mar tonight's celebrations. They might even have to cancel the black and white minstrel show if this blows up - they will be very disappointed.

The thin veneer of likability is cracking, we're starting to see Key and the Nats as they are and as they've always been. White, privileged, racist buffoons.

"How is Tuhoe supposed to react to this?"

By issuing a press release?

"Well, Murray McCully, or whoever is the lack of brains behind this stunt must value the opinion of Tuhoe far, far below the opinion of the sort of muppet listening to ZB that the Tories think would appreciate that great, gaffawing, knee-slapping joke."

Democracy sucks eh Tim. How many Tuhoe would vote for national - nada. Therefore they have no leverage except for the goodwill of the national govnt and if you have people like Tame and Hone being angry at you then who the fuck cares.

All in all an excellent move by Key to get in touch with his base.

Get a life, all he's doing is making a light-hearted reference towards how unpopular he is with Tuhoe after his recent annoucement. Big deal.

How's Tuhoe supposed to react? Eat him, say it was another little joke, and deny it was in bad taste...

God the scum sucking level some people operate in. Ignorance and fear peppered with guilt has made all Maori people the enemy in eyes of some non-Maori in NZ. These creeps are so scared of their perceived inability to keep it together that they have convinced themselves the only 'safe' way for themselves is to ensure Maori are kept as a permanent underclass that way they don't have to worry that their weaknesses make 'em dwell on the bottom 24/7 rather than just when they need to feed.

In the real world - the actual world most of us live in - the sort of joke people make regarding a group of people they had upset. eg "They'll have you for breakfast"... "have your head on a plate..." etc. are all common expressions used in HUMOUR.

The fact you see the immediate cannibalism connection says more about you, than it does about John Key. The fact that John Key made the comment shows that he was not thinking "Tuhoe = cannibals".

Really came in to comment on the sad reality that the only resistance from the Maori Party to this disgrace has come from Flavell, probably because he imagines that he can still swing a few Tuhoe votes next election. You'll notice he's only proferred words. The Maori Party don't propose any action.

Because the Maori Party have accepted a bullshit and meaningless ownership of the seabed in return for offering up Tuhoe ownership of Uruwera National Park. Swapped substance for a shadow.
The Maori Party has been misnamed. It should be the "Some Maori Party". The party just for those Maoris who kissed whitefella ass and helped Key's predecessors burn down Tuhoe villages, rape their women and steal their land.

The Uncle Tom Party for those maori with high level tribal connections in the tribes who licked the crown's butt.
Nothing for urban Maori long separated from their whakapapa, or from clans outside those 'officially' recognised by the drunken and corrupt representatives of the crown 150 years ago. Especially nothing for the Tuhoe who provided shelter and refuge to other Tangata Whenua fleeing the whitefella onslaught. Especially nothing for the Tuhoe who shamed other tribes when the Tuhoe had the brains to see through Hobson's lies and showed the strength to refuse to sign the surrender document.

By the time Maori Party supporters wake up to the fraud which has been perpetrated upon them, the 'Maori movement' will be a fragmented husk of what it was.
Key and Co are Tories, they have been dividing and ruling forever.

If Hone Harawera's comments were OK then so is Key's joke.

And anyone who thinks Maori are being 'kept down' in the underclass is an idiot living on a different planet.

Then why are Maori over-represented in pretty much any negative statistic imaginable? Because they are dumb niggers? Pffffffftttt

Imagine the fuss if Helen Clark had shown the political naivety to say the same thing, wouldn't be over reacting then would it!

"And anyone who thinks Maori are being 'kept down' in the underclass is an idiot living on a different planet."

Planet urban liberal which is orbiting several hundred million light years away from the sun of reality.

In the real world - the actual world most of us live in - the sort of joke people make regarding a group of people they had upset. eg "They'll have you for breakfast"... "have your head on a plate..." etc. are all common expressions used in HUMOUR. "

He's supposed to be our LEADER! Not a bloody second rate comedian. Unfortunately due to the intellectual void that now exists in our reality TV, news as advertorial, six o'clock swill country, being a second rate smiling gimp seems to be a form of political genius. His popularity revealing a very unfortunate truth about our aspirations.

Does he have to have to have his personality extracted to be "our leader"? I think so many kiwis relate to him precisely because he has a relaxed manner and is not afraid to be himself. (No, I'm not a fan of his myself - but I have a better reason for this, than his propensity to make throwaway jokes. He was speaking to a lunch audience, for goodness sake - not addressing the nation.)

"Second-rate comedian"? Well that depends on whether the audience laughed. I'm guessing that they did. I can only think of 2 or 3 nation "leaders" that seem void of humour. From memory, things didn't work out too well for their countries

AAMC you say that the media is an "intellectual void". Yet you just fed on the "swill" served up to you. Did you hear the actual content of the speech or were you happy to judge by one sentence from the introduction? Doesn't that make you part of the problem you describe?

his propensity to make throwaway jokes. He was speaking to a lunch audience, for goodness sake - not addressing the nation.)

But it wasn't a throw away joke was it? It was a scripted joke, less than 24 hours of denying Tuhoe justice, within that context it's totally out of line.

The only people capable of seeing this as a joke are those who are ignorant of the history of the Tuhoe people. Unfortunately that is the majority of people who live in present day NZ. Key is a pig ignorant brain dead turd of a PM. NZ voted for him so we deserve every cringe worthy moment of his lame leadership.

My reference to the intellectual void Anon is in regards to how poorly the media serves to inform us and the part that plays in the ease with which our friends at Crosby & Textor and the strategists behind Key n Co can gain favour with policy which in fact disadvantages most of it's complacent supporters. My comment is not specific to this incident, but to the fact that it is unlikely to damage Key's popularity, as so many other issues also fail to gain momentum. We're willing consumers of an easy PR dictated diet.
I agree, possession of humor can only be an asset to a leader, but the timing suggests that humor perhaps wasn't appropriate. It illustrates, either as Bomber suggests, a scripted opportunity to show your red neck base that you're really happy to kick them while they're down, or the opposite, a stupid attempt at humor without the political nous to foresee the consequences. Either option concerns me.
To my memory, the inflammation of racial tension for political gain also has a history of things not working out to well in the countries where it is espoused.

"NZ voted for him so we deserve every cringe worthy moment of his lame leadership."