David Farrar and John Key protesteth too much 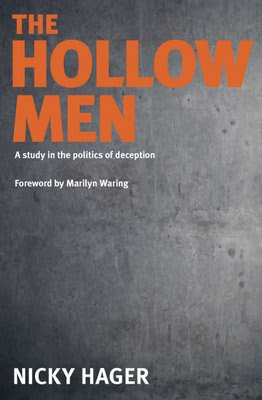 I love the focus by the mainstream media over who leaked the emails and not what the emails revealed about National.

If Hager’s book had been a microscopic evaluation of Labour, then this book would have been front page reading and the attack on Labour would not end and not one word would be spoken regarding how Hager got the emails.

Funny word corruption isn’t it? National used it against Labour with the election over-spending fiasco, but what do you call knowing who the donors in anonymous trusts are? Or false statements made to statutory officials about that knowledge? Or lying about secret campaigns when National were aware of what the Exclusive Brethren were planning while having a plan of denial ready if that information ever saw the light of day? Or the fact that a small bunch of rich right wing ideologues with links to America's far right were creating secret agendas for Don Brash? Or the out right lies and deceit used to hide this “secret right wing agenda”? (their words not mine). What about the Maaaaaori get too much racially divisive racist crap where National KNEW what they were saying was bullshit and concocted a story to throw the media off the scent when that bullshit was detected?

I suppose none of that is corruption? The response you get from our friends on the right is ‘Big deal, Politicians lie, get over it’ – I’m sorry, the dirty machinations of inner National Party workings is unearthed and the best you have is ‘Big deal, Politicians lie’. I think that line of defense is as intellectually shallow as Don Brash and as disingenuous as John Key’s ‘I didn’t read that Exclusive Brethren funding e-mail’ excuse.

The Hollow Men revealed all these lies and yet the focus is on ‘who stole the emails’ – what a joke, what about what they revealed about National, that is far more important than who stole them!

What is fascinating however has been the response by online National Party spin machine, David Farrar. When I first reported that Don's emails were printed off and that was the source of the emails, look at what David posted on Tumeke...


So Don did not get his emails printed out for him, and there was no shredding of them the next day.

Interesting to note the Police said the following in todays news story...

It noted that Dr Brash printed documents at night to collect in the morning and left documents in his out-tray for shredding, which was not attended to regularly.


So Don did not get his emails printed out for him, and there was no shredding of them the next day.

...hmmm, David was very quick to try and shut me down on the printed emails as the source, going so far to state that Don never printed or shredded emails (even though an 'S' was written by Don on all the emails he wanted shredded). So David Farrar was the IT Manager for National, this is the same David who is good friends with the English family and of course Mary just happens to be on the same school board as Nicky Hager.

And John Key continues to desperately spin the lie that the emails were hacked even though the Police has stated that is the least likely event to have occurred.

All just 'left wing bollocks' is it John?


...hmmm, David and John seem to be protestething too much don't they?

Why doesn't the mainstream media focus on the actual contents of the emails? A fascinating insight into the world of the national party behind the closed doors. I must read my copy of the hollow men again.

The same spin doctor probably works for cadbury. when they decresed theyr chocolate size, everyone bitched but instead of focusing on that and the fact they fucked off to oz, they chose to focus on the palm oil which they could easily change back and then act like that was the problem the whole time and all of new zealand agreed like good sheep! A mirror image of this incident

We'd take you a lot more seriously if stopped giving Labour and the Greens a free pass simply because they're socialists. Until then keep on whining into the cyberether.

Um, did you actually read his writeup just then or just read the highlights?...

Um, did you actually read his writeup just then or just read the highlights?...

and the greens don't prescribe to any particular ideology

Actually, it's bloody hard to take seriously anyone called "Anonymous", so I suggest Anonymous Of The Cyberether stops whining until it's got the guts to give itself a name.

@sts - where DID all the lefties go?