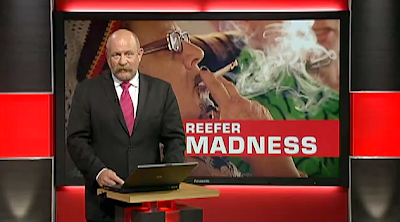 Pretty hypercritical really, after the hit job Close Up ran on Dakta Green, to have it revealed that while head office was ranting and raving about stoner madness, the staff were having a quick toke after the filming with the NORML folks on the bus shows up the ludicrous nature of drug prohibition in this country, a ludicrousness that Simon Power has refused to confront with his turning down of Geoffrey Palmers well thought out look at marijuana law reform.

Personally I don't see what the problem with TVNZ staff smoking weed is because being really, really, really stoned is the only way the viewer can watch TVNZ. Having to watch TVNZ bump the PM who was caught out lying about a GST rise for an All Black who groped a teenager on the beach meant many had to light a joint just to calm the indignation. I'd suggest that TVNZ current affairs is one of the leading reasons for medicinal marijuana use in this country.

UPDATE Apparently the angle that was originally filmed was too supportive for the case to change the law, so Close Up HQ ended up doing a hatchet job hence the complaint that while Close Up execs decided to attack the reform movement, TVNZ staff were enjoying a smoke.

Perhaps if TVNZ execs had decided to allow the report go to air as it was, they wouldn't be facing this hypocracy now.

Yes I would have to concur with you medical assessment doctor. The patient (TVNZ) is suffering from chronic nausea and medical marijuana would seem to be the only option here.

My god - so they are now inventing their own news to make the news?

The film crew and reporters were great, completely supportive of the cause and loved seeing all the support we received from West Auckland, up through Northland and then finally the thousands of people chanting with us as we did our hikoi along the foreshore until we had hundreds of people marching with us in support as we made our way to the treaty grounds.

The treatment by TVNZ's Close Up editors was appalling and my thoughts are with the staff that have to deal with the ramifications of living NORMLy.

Well, I totally support their use of cannabis. This behaviour should be publicised, and they should be commended for getting involved in the story and using such a subjective method of journalism.

"Personally I don't see what the problem with TVNZ staff smoking weed is because being really, really, really stoned is the only way the viewer can watch TVNZ"

You don't have a problem with a lot of things reasonable people do like releasing murderers without penalty. SFW.

You don't have a problem with a lot of things reasonable people do like releasing murderers without penalty. SFW.

Sigh - silly anon putting words in my mouth to make some petty point while ignoring the issue at hand. I've never argued to release murderers without penalty. The fact you stoop to lies to make a point illuminates how little you have to add anon.

Bomber, a continuity review of Dakta sparking up would reveal how contrived the 'edit' process was. TVNZ not only passed off a perception that did not reflect the reality, they bloody engineered it to be so.

The failure to report the news footage shot at Waitangi is purposeful manipulation. TVNZ deserves to be scrutinised and compelled to show a represenative sample of what occured at that historical occasion. John Key shaking Dakta's hand would have been good, but the crowd scenes far more compelling viewing as we move into the Law Review Process.

However I would not be so agreeable to the earnest support you have given to the Law Commission Review that weights Cannabis law reform poorly given it is the neigbouring intoxicant to Alcohol. (see http://www.saferchoice.org) Or for its complete ommission of the "restricted substances regualtions" passed in to law when John Key became right and honourable. This "Class D" innovation makes legal the sale (R18) of recreational psychoactive substances with provision for labeling, place of sale, processing, manufacture, storage, advertising and crucially, who administers the regulatatory environment, the Ministry of Health (under whose warrant all drug charges are laid).

Now to conduct a 'law review' and not even mention the framework that such a law might look like when we already have the law may confuse some... but if confusion was the intention then that has been achieved. Simon Power needs his political arse kicked along with Tony Ryall. These are not men to whom the 'evidence base' should be entrusted. Whereas the grave error of omission buy Sir Goofry Palmer et all is just pure incompetance. They were provided with public input that detailed expressly the significance of linking alcohol policy to cannabis policy with a consensus from the Commission that 'one would inform the other'. Until there is evidence that has happened the current review discussion document is without merit.