Gerry and his magic beans 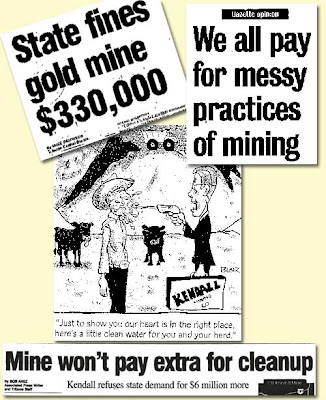 Mining decision backward step, say Greens
Environmentalists fear the country will take a giant step backwards after Prime Minister John Key signalled some conservation land could lose its protection and be opened up for mining.

So in a not too distant future where oil is peaking and fear starts to dictate price with China and America locked in a Mexican stand off to be the next Super power in the Pacific, how will the tiny Hobbits of NZ be able to withstand the twin eyes of Morder we would have fall upon us if we found $60 billion in oil off the NZ coast?

Where ever oil has been found in such quantities, the corporate influence of war and political thuggery is not too far behind. Will we end up the slave of America or China and will NZ be tricked as easily as every other small country who has found oil to descending into the internal political chaos that makes extraction so easy by those outside influences?

Moving offshore to on land and the mining companies of course are running the line that they are environmentally kind and loving. ‘Small footprints’ are the spin lines alongside plans to use the waste products to build wetlands for birds (I’m not joking). The spin is all bullshit, mining companies don’t give a shit about the environmental impact of their rape and pillage any more than the end consumers who purchase the stuff they dig out of the ground cares. National’s game plan is to let the mining industry pretend they love the environment and convince New Zealanders that a survey is the smart thing to do.

Beyond the environmental damage, ("Environmental mining' is like 'good cancer' - it doesn't exist), finding minerals in a financial crises will sound great but under our piss weak current system of charging these massive multi national mining companies a small fraction of what they take we'll be left with the environmental damage AND greatly fewer commercial gains than were insinuated. Gerry huffs and puffs that there is $60 billion worth of oil, but we don't get that, we only get 30% of what we sell. The amount sited gives an inflated sense of what we will gain, the reality will be a situation where NZers turn to Brownlee as they survey the environmental desecration and minuscule revenue only to be confronted by Gerry excitedly telling us that he gots us some magic beans.

The spin line National will use is the following. The survey will "find" a precious mineral under a national treasure they have no intention of mining and have John Key move against it immediately to declare our environment is precious, blah blah and demand that the national treasure is preserved and with much fan fare and photo ops will open the "John Key Memorial National Park" all the while the fine print enables them to throw the rest of the conservation lands to the baying jackals of the multinational mining corporates.

Whoever is spinning National deserve their bonus this year. 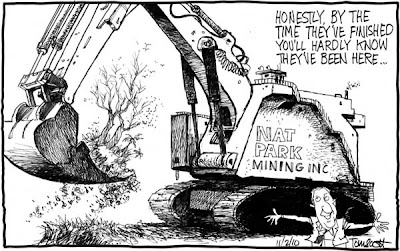