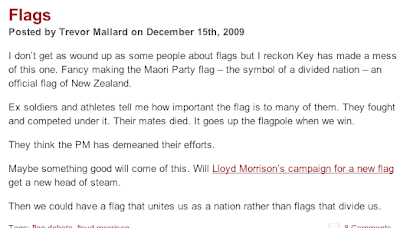 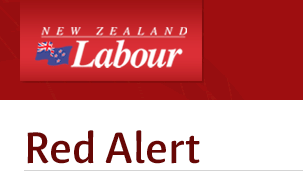 ...kinda dumb if you are trying to claim that the Tino Rangatiratanga flag is a symbol of a dived nation when the logo of your own party has at its core the flag of a foreign nation, and kinda dumb to now be campaigning to dump the Labour Party logo that you've made such a prominent part of your blog. Kinda dumb. So he's trying to be racist again, but it just looks silly - and now the decision has been made it also looks a bit petty.

John Key's talking about unity and maturity and the future and national identity with Maori and the Crown constructively working together with harmonious race relations - as a Tory and as a leader of a conservative Pakeha party. That is a smart move. And Phil Goff and the Labour party? They are talking about "division" and hating on Maori - as a party of the left and kept afloat by Maori. That is so dumb. That is so fucking dumb it just checked into the Thicko suite at the Hotel Idiot and started drinking from the bidet.

Labour are alienating their own voters and the conservative red necks they are trying so desperately to attract will always vote for the real Tory - not the poor imitation Tory-lite Labour version. Trevor is ploughing ahead regardless in the hope of an opinion poll bounce - and the spectacle is going to see Goff have to squirm a little more before they drop it. The next target is... 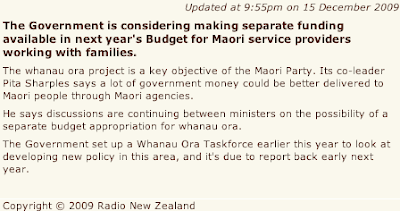 The "Whanau Ora" policy and the roll-out of it will be the next race-bait issue for Labour in the new year.

And in related news: 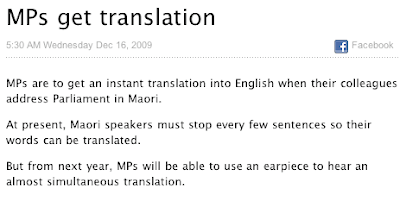 Simultaneous translation is something most people who have witnessed parliament (and probably the MPs themselves) have wanted and now it's happening. Great. But it does not sound like the 99% of English spoken is going to be translated into Te Reo though - which is a shame.

The translators will probably find it easier than now - I think for the longer speeches they write notes and then at the end read from them.

They should have both translations as audio options on Sky and Freeview - that would be very cool. In some countries they have a sign language translation in an inset. NZ sign language is an official language and earlier this year they had a week when someone was signing. It was often very entertaining seeing the live juxtaposing of what the politicians were saying with what the physical expression of it translated to. They made it quite clear when the speaker was just waffling for example.

The other issue this raises is whether Hansard is a transcript of what is said or is a journal that must be transcribed into English. Either way it should be translated into Maori and now they have that ability via the translators.

What's dumb, pandering to an ethnic group which nets you another 3-4% of the vote or the working class white vote that gets you a whole lot more.

Not for the past three elections.

Maybe its time for Maori to clean up their own act and get rid of clowns like Hone so they can come to the pakeha's table and not be seen as an electoral liability.

Your problem Tim is that you think the Maori vote is essential for a party to gain power. It is not. So as long as you fail to realise that Maori will always be beholden to others then your analysis will always be flawed.

oh sorry.....i thought for a moment I was reading the National Party website!

Again, not sure what speech you read but Goff NEVER gave a speech on race relations.

Maori must be truly stupid....what did they get as a payment for completely selling out to the right....a flag!!!! wow weeee!

Some people have been dupes of the neoliberal right before.

The last time round it was them being 'distracted' by a Nuclear Free NZ while Rogernomes raped the country.

This time it's being 'distracted' by all the pretty ethnic tokenism and fig leaf maori nationalism while Maori get fucked by this government.

History repeats itself one more time.

Identity politics have had their day Tim. Part-Maori citizens of this country aren't sucked in by the 'Maori' party's bullshit posturing. If 'Dr' Sharples can't use his position of influence to put more money in their pockets and come through on things that really count then...

Fuck it funny how Maori think its a big deal that they're allowed to fly their flag and it actually means something. It's really a empty symbolic gesture empty of any practical meaning.

I'm pleased to read this. I have been struggling to understand why others struggle to understand that the Maori party does not magically stand for all of Maoridom, and nor does it have the interests of all of Maoridom at heart. It is not particularly socialist, or "left"-leaning. It's the party of the Maori elite and their values are coming across more libertarian or neo-liberal; at times I have trouble distinguishing them from ACT!

Part-Maori, urban Maori, the disenfranchised and the working classes will need to put aside their differences and unite to get rid of this triple-headed Nat-ACT-Maori monster, a far more dangerous enemy.

Also Tim, I'm not trying to get all up in your grill, but you (and others, here and elsewhere) throw the word "racist" around a lot, seemingly as an insult more than anything more meaningful, and while I get where you're coming from I'm a bit worried that the word will start to lose its value. For example, I'm not sure that it is racist to talk of a "divided nation" in the context of the Tino Rangitiratanga flag, which is, or has been, the symbol of the Maori Sovereignty movement.

I have trouble wondering why part maori would actually support Maori aspirations in the first place. I'm part Irish but I don't support the actions of the IRA. I think Tim is mistaken in thinking that the colour of your skin determines your politics.