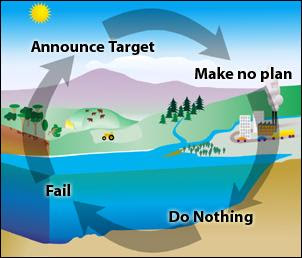 While Australia is facing catastrophic fire danger with temperatures soaring way above their average, while Melbourne faced flash floods and a recent report warned of vast coastal erosion; with all these erratic weather conditions occurring all at the same time, the Liberals still have a vast chunk of their party who believe climate change from man made pollution is still a myth.

This is a case of Nero playing a didgeridoo while the outback burns.

We have our own climate deniers, and Gareth over at Hot Topic has done another great job knocking over their utter bullshit...

NZ sceptics lie about temp records, try to smear top scientist
The cranks in the NZ Climate “Science” Coalition have sunk to new lows in a desperate attempt to cash in on the far-right driven furore about the Hadley CRU data theft. Here’s an extract from a press release which was doing the rounds of NZ’s newsrooms this morning:

New Zealand may have its own “Climategate”, including manipulation of temperature readings, according to a combined research project undertaken by members of the Climate Conversation Group and the New Zealand Climate Science Coalition. The researchers claim that temperature readings from seven weather stations throughout New Zealand have been adjusted to show a higher degree of warming than is justified by a study of the original raw data.

The author of the press release and the “research project” into NZ’s long term temperature record is blogger Richard Treadgold, not unknown to readers of Hot Topic. Unfortunately for him, and for the credibility of any of the members of the NZ Climate “Science” Coalition, Treadgold’s approach to the issue is ignorant, his results meaningless, and he can have no excuse for not knowing he was wrong. Worse, Treadgold, Dunleavy and the rest of the NZ CSC seem determined to smear NZ’s best-known and most respected climatologist, Jim Salinger (who did much of the early work on NZ’s temperature record), based on little more than straightforward lies. Their press release continues:

“NIWA’s official graph (done originally by Dr Jim Salinger, who features also in the emails leaked from the Climatic Research Unit of the University of East Anglia) shows considerable warming, which they give as 0.92°C per century, saying this is consistent with global warming over the 20th century. But the actual temperature readings taken from the thermometers show an almost flat trend for 150 years.

“These figures all come from NIWA. So, why are they so different from each other? Because NIWA has adjusted the earliest temperature readings downwards by up to 1.3°C, which has the effect of introducing a false ‘warming’ as the graph then ‘climbs’ to the present day. It’s a disgrace. So far, neither Dr Salinger nor NIWA has revealed why they did this,” said Mr Treadgold.

The real disgrace is that this analysis has been conducted by a team seemingly hell bent on ignoring the facts, preferring instead to make up their own.

Gareth goes onto utterly dismantle their bullshit, check it out blow by blow if you have any doubts.

Global Warming due to man made pollution is real, it is happening and unless urgent change is sought in the manner we allow consumer capitalism to continue to denigrate our biosphere it will bring about violent and erratic changes in our global environment.

That's a fact. Climate deniers are the creationists at an evolution conference, they should be politely ignored, we have a planet to save.

Meanwhile our Prime Minister still refuses to go to Copenhagen after passing an Emission Trading Scam with a bribed Maori Party that pays corporate big pollutors to keep polluting...

Key keeps to schedule despite Obama plan
Prime Minister John Key says he is not reconsidering whether to attend a climate change summit in Copenhagen, despite reports that United States President Barack Obama will now go. Mr Key said he was standing by his position that he would not go to the leaders' meeting at the United Nations summit next month unless a definitive deal on climate change targets was on the table.

Total bullshit. These guys have been fudging the figures and have been caught. The excuses offered on hot topic are pathetic and do not explain the widespread adjustments of temperature readings.
Too bad that the solar activity is showing no signs of increasing which means lower temperatures in the coming years, too bad for the the real climate criminals.
Simple stuff, simple and good.
CO2 is not a pollutant, another bit of real scientific fact for you.

The environmental movement was hijacked - our rivers are toxic & our fuel is low quality, causing actual air pollution - but people spend their time advocating Al Gore's nonsense based on crooked science?

If you don't have at least a science degree you should hold your tongue re: global warming. The debate is by no means over.

and what about the human population exploding so that by 2050 these "savings" wont mean shit. climate change is bullshit. look at the raw facts.

They have been caught red handed fudging figures .This is a criminal offence.What you dont you understand is this is the start of the INSANE criminals world goverment, they use idiot scientist who they pay grants too . What a joke, they will fail bc the truth is gods creation. these people who support this travesty, which means taxes on everything.But the stupid politicins continue to beleive these criminals ,which mean there criminals themselves. There is free energy here but the criminals will not alloww it.WHY!! Easy sheep money and power. Free energy is exactly that free.And we have had it for 50 years.But you sheep keep on drinking your beer, and be slaves to criminals. banks pay these fools, computer models dont make climate chnge .Observation and experiment does.SIMPLE>