This is what we are fighting for in Afghanistan? 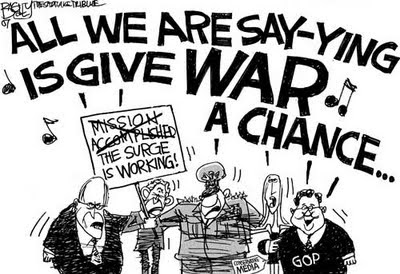 Afghan poll picture darkens with run-off looming
International observers have called for an election run-off in Afghanistan after a UN-backed fraud watchdog invalidated tens of thousands of votes for President Hamid Karzai from August's disputed first round.

All John Key is saying, is give war a chance! We don’t need to worry about our troops being involved in torture because the Afghan Government has ‘promised’ our Optimist-in-chief that they won’t be used to do anything other than kill terrorists.

R-I-G-H-T, this is the same Afghan Government that is currently believed to have stolen the recent election, that is who our medicatedly optimistic Prime Ministers has a firm assurance from? This is the same Prime Minister who is pulling our reconstruction teams out to replace them with the SAS because bullets are cheaper than building schools?

Okay, let’s have a look at our Optimist-in-Chief’s actual strategy behind sending the SAS back into Afghanistan.

They are on an 18 month deployment while we are pulling back on the reconstruction team and look most likely to be replacing the Dutch troops in the Uruzgan province and will most likely adopt what the Dutch were doing which was hunting down forces who launch attacks on coalition forces.

Professor Thomas Johnson on Morning Report attacked the decision to pull reconstruction teams out of Bamiyan describing sending in the SAS while pulling out the reconstruction team as the “Exact wrong thing to do”. The British say it will take 40 years to ‘win’ in Afghanistan, the US say it will be a minimum of 10 years, our Prime Minister claims that the reason we are sending in the SAS is to stabilize Afghanistan and to combat global terrorism. Key stated at the press conference that the SAS wouldn’t need to be redeployed past 2011 because, and I quote, “I’m more optimistic than that”. Christ, I’m ‘optimistic’ I’ll sleep with Angelina Jolie but there’s piss all chance of it happening. John Key seems to think that NZ can stabilize Afghanistan and ‘combat terrorism’ all within 18 months while our allies are painting anywhere between 10-40years.

Look we all know our PM is Mr Aspirational, but this bloody ridiculous, there’s no way the SAS can do those things within 18months and it flies in the face of the kind of strategy necessary to actually stabilize the country. Beyond, ‘Give War A Chance’, Key doesn’t seem to have a clue about what needs to be done yet he has asked our forces to pointlessly risk their lives for a mission impossible to achieve.

So what exactly are we fighting for in Afghanistan other than laws that demand sexual obedience from women and corrupt elections? We are now fighting to pay the Taliban protection money…

Are US taxpayers funding the Taliban?

…oh and let’s not forget who we are fighting alongside, the neoliberal mercenary euphemistically referred to as ‘contractors’…

…right so the American’s now admit that it’s bad, yet our Optimist-in-chief keeps pretending that our SAS will be able to stabilize the country and contain terrorism all within 18months?

Don’t worry though, John Key has had a promise from the corrupt Afghan Government no one we hand over to them will be tortured.

"Stolen the recent election"....ummm are you suggesting that the irregularities (which obviously took place) would have swung the result???

The Dutch have had to deal with a sharp increase in casualties fighting in the regions which the SAS is going to take over.
It will only be a matter of time before we will start to bring back the body bags

What's the use of an elite military force if we never get to use them. Afghanistan is a great training ground and will serve to encourage enlistment into our military.

The continuing resource wars in Iraq and Afghanistan, the ongoing occupations of indigenous territories such as in Palestine and West Papua, the repression of popular democratic movements on every continent- Honduras, Iran, Burma are all dependent upon the support & collaboration of Western governments and corporations and the silence and ignorance of their citizens and workers. Not only is global peoples’ solidarity a value to be admired but a precursor to the victory of insurgent oppressed peoples in the poor world. New Zealand is currently facilitating the construction of a free trade area of the Pacific via an agreement known as PACER that will wreck the economic sovereignty of small Island states in favour for ANZAC capitalists. The New Zealand Government also plays a small but important role in the occupation of Afghanistan, diplomatic support for Israeli atrocities, legitimacy of South-East Asian butchers installed in Indonesia, Burma and the Philippines. Trans-national corporations involved in the pillaging of the poor world and indigenous territories, the arming of the imperial armies are often also selling their tainted products or building their weapons of mass destruction in Aotearoa. Our responsibility as socialists is much the same as the British dockworkers who early in the twentieth century raised funds for the Indian independence movement. It is to join in the struggle of the oppressed peoples of the world as it is also our struggle. Supporting the Palestinian call for Boycott, Divestment and Sanctions against Israel should be a top priority. As should ending Kwila imports and sales in solidarity with West Papuan tribes people resisting bio-colonialism, land enclosures and deforestation. The Burmese struggle should be supported through a call for our Government’s Superannuation Fund to divest from the French oil corporation Total Oil, busy supporting the Junta in Burma.

Concrete things to do:

1. Hold a public meeting on the increasingly successful global BDS movement in solidarity with Palestinian civil society resistance and call for a demonstration for the NZ Superfund to divest from $10 million invested in Israeli corporations including banks which provide mortgage loans for the construction of housing in West Bank settlements, and have several branches in the occupied territory and cement companies involved in the Apartheid wall.
2. Support the campaign against Kwila and Palm oil imports and sales.

Facing Taliban threats and approaching winter snows, Afghan election officials must now scramble to organize a runoff presidential election on Nov. 7 after a grim President Hamid Karzai bowed to intense U.S. pressure and acknowledged Tuesday that he fell short of a majority.

U.N. Secretary-General Ban Ki-moon said it will be a "huge challenge" to pull off new balloting without repeating the widespread fraud that caused U.N.-backed investigators to strip Karzai of nearly a third of his votes from the Aug. 20 first-round election.

Although Karzai's capitulation was a relief to American officials and averted a constitutional crisis, new balloting carries with it the risk of low turnout or another round of wholesale ballot-stuffing and voter intimidation. Another failed election would bring the Obama administration no closer to its goal of a credible, legitimate Afghan government necessary to win public support in the U.S. for the war and reverse the Taliban rise.

An entire Soviet Division was wiped out here in the Eighties.U.S soldiers have even been dis-membered!

and it takes more than 2 hours to drive a convoy of 30 vehicles dubbed the pirates for their bomb detecting vehicles, just 11 kms.Combat out-post Tangi resembles a wild west fort and it has walls of temporary instead of permanent sandbags not wooden fences , gun emplacements and ammo and a flag flying above rows of khaki tents.

The convoy unloads vital supplies to a a spread-thread-bare network of camps with basic supplies of dried food packets for an inadequate weight loss diet and unclean drinking water and basic if that sanitation.The inordinate time wasting bomb disposal troops trip takes 12 hours to travel a road-less waste-land's 80 km journey, and all to supply one of many tiny outposts or prt's.

The West was determined that Afghanistan would not return to being an un-governed space , that could be exploited by the likes of al-qaeda and where the taliban could regroup.

AFGHANISTAN COULD BECOME PEACEFUL AND PROSPEROUS; AND THE RECONSTRUCTION OF THE COUNTRY WAS A VITAL STEP IN THAT PROCESS.

After more than 25 years of conflict much of the civil infrastructure and governance was barely recognisable.The people lived amongst the ruins and squalor and poverty with barely drinkable clean water and toilets only for the wealthy, as afghanistan had finally plunged beyond the reaches of the third world.It was now purely medieval!

The climate is unbearable and at the height of summer reaches 55 degrees.In winter it reaches -20 degrees.It has some of the most profound thunderstorms anywhere.Dry wadis become raging infernos.This deeply inhospitable terrain has proved too much to bear in the none too distant past.

In 1842 16,000 of general elphinstone's troops had been largely wiped out during retreat from kabul.More than a century onwards and after the russian invasion the red army failed to hold helmand some 275 miles long and a hundred wide the majority of which is flat desert but mountains as well with the green-belt or strip of irrigated land five miles across.A perfect hiding place for the taliban and their sympathisers apparently.The helmand river snakes along the entire province and shares an unruly border with the tribal region of pakistan.An entire division which would be a luxury by today's standards was annihilated.

The violence is deeper, darker and more disturbing as there were once no suicide bombers.The strain is enormous and troops get diagnosed as mentally ill to avoid a second or even a third deployment.In 2007 375 british troops did this to opt out according to the m.o.d.Some of them have been twice.Sometimes they do 3 stints or tours of duty in only 5 years.And it is not as if the war is popular with the public or whom they miss while away from hearth and home, not just for 6 months of service but also lengthy training to use light machine guns, l.m.g's; in the mostly flat heat and dust for example.Public opinion remains divided and resolutely sceptical about the value of the lack of progress both military and civilian politics.There is definitely a reluctance to go back to afghanistan.Front line forts are harsh, squalid and exhausting lugging weighty packs on knackering patrols.There is a need for constant vigilance due to enemy tactics replicated from iraq and which frays the nerves for i.e.d's, and these are used in tandem with suicide bomber attacks to inflict maximum damage to often-wise shaky morale.Not just the climate but the people are described as wild.There is nothing in recent memory to draw on.Go back more than 100 years to the end of the 19th century.The malakand field force fought the pashtun's in the north west frontier near waziristan now under seige battling heat and thirst and opponents steeped in a culture of retaliatory revengefulness and a desperate lack of mercy.The strong propensity of the natives to killing prevails and stimulates a wild and merciless fanaticism.That religion founded and propagated by the sword and the tenets and principles of deeply driven instincts with incentives to slaughter in 3 continents of fighting breeds of men continues unabated for the time being it would seem.