Peace on oppressor's terms never a peace worth having 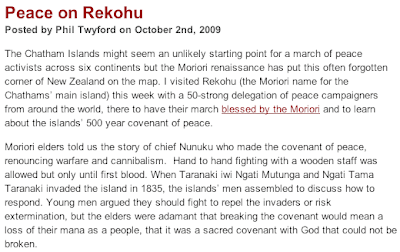 The world over the self-imposed restriction to non-violent protest on the part of indigenous and local people makes the confiscation and occupation of their lands and resources by the violent party commercially viable, and makes the control over their society and culture an inevitability.

Peace campaigners and most politicians, like our glib friend Phil Twyford MP, applaud Gandhi and his type of code of non-violence as a legitimate method for the oppressed to achieve their goals, and maybe even the only method. What the bumper sticker level of analysis fails to recognise is that a path of non-violence often leads to the gates of permanent injustice and genocide. The real-world examples are plain enough: non-violence as a stratagem by one rewards, encourages and provokes a stratagem of violence by the other. This was true of the appeasement policy towards Hitler in the 1930s as it was true of the Chatham Islands in the 1830s.

Gandhi's strategy of non-violence only worked in India because there were hundreds of millions of Indians and only a handful of British. Population was the luxury Gandhi had. How many millions was Gandhi prepared to sacrifice? Non-violence doesn't work as a method of resistance when those being oppressed and invaded are in the minority. They just get wiped out.

But these facts will never let the politicians - and the naive who believe their shallow platitudes - stop the mantra being chanted at every occasion where "peace" is mentioned: non-violent protest is the only answer and "peace" must be maintained regardless of the atrocities and predation.

Just stand there and get bashed, get raped, get killed, let them loot it all without putting up a fight - that's their message - their message to others who are supposed to make a sacrifice for their policy of non-violence. It is a preposterous position for anyone to take, especially someone in a leadership role. If those people actually thought it through they would have to be in favour of an unarmed defence force and a commitment to meet any aggression to the nation without recourse to the infliction of fatalities or harm to the other side. If they are not advocating for that then they are hypocrites.

When people praise the old fools who refused to come to terms with modern realities, who ignored the youth, and who doomed their tribe to enslavement what credibility do they have to speak on the subject of self-preservation, let alone national preservation?

South Africa would still have Apartheid today if Mandela and the ANC had kept their original strategy of non-violence. Lesotho - an enclave within South Africa itself - only retained its independence from the proto-Apartheid regime through armed rebellion. There are few national liberation stories and the toppling of oppressive governments that do not involve violence on the part of protesters, but many stories of failure to throw off an unwanted regime because of leadership who have sworn themselves to a non-violent solution. For example, Burma is run by a junta because the pathetic Su Kyi is a slave to the non-violence myth. She is the reason there is still a military dictatorship. As long as she chooses to remain in her villa espousing non-violence nothing will change. If the military dictatorship should come to an end it will have nothing to do with her.

There is evidence everywhere you choose to look that a strict adherence to non-violence is exactly what an oppressive force needs from its opponents in order to take power and to stay in power.

I don't think your comment on Burma is an accurate reflection of the facts Tim and in my opinion is completely wrong.

Su Kyi is merely a PR sideshow because she is photogenic and appeals to liberal westerners. Armed struggle is being carried out by numerous tribes such as the Kachin and Karans against the Burmese junta as has bee for the past 40 years.

Apartheid will have still existed today if the Communism hadn't fallen and provided a viable alternative economic model to supplant capitalism. Instead the whites accepted black rule in return for the black acceptance of their property rights.

You are so wrong its painful Tim.

You use violence against the state, they can arrest, imprison, assault, torture or kill you.
Legally.

You use non-violence, they can't do any of those things, and when they do, it lessens their grip on power.


You think violence works because you are an angry man.
Where has it got you so far?

There is evidence everywhere you choose to look that a strict adherence to violence will get you, your family and neighbours arrested, imprisoned, assaulted, tortured or killed.

Young Tibetans are also finding it increasingly difficult to abide by the Dalai Lama's insistence on non-violent protest.

Great piece with the exception of the Burma stuff. I recall when there was the highly publicised conflict about a year or two ago, there were some soldiers who disobeyed orders and stayed in the barracks, and other soldiers who fought the pro-junta soldiers.

The perfect example for your argument is Israel.

They were fucked over for two millenia, and finally said enough.
Appeasing Muslims/Christians got them nowhere, so instead they stood up and fought for themselves.

After all, no one else was going to fight for them.

No one fucks with Israel no

"The perfect example for your argument is Israel."

True, look at all the Nazis they found and executed not to mention Arab terrorists. Sends a message that Israel will find you where ever you try to hide.

After all, no one else was going to fight for them.

No one fucks with Israel no

Yeah, how did that go?

"There is evidence everywhere you choose to look that a strict adherence to violence will get you, your family and neighbours arrested, imprisoned, assaulted, tortured or killed."

Who said anything about a strict adherence to violence. Violence is sometimes neccesary as another tool in your arsenal. If you were being attacked by someone intent on doing you harm and you had the opportunity to stop him, would you stand there and be kicked to the ground or take the bastard out if you could?

Who said anything about a strict adherence to violence.

It was a play on Tim's final sentence:

There is evidence everywhere you choose to look that s strict adherence to non-violence...

Violence is sometimes neccesary as another tool in your arsenal.

Against the state?
Really?
Give us an example JonL.

If you were being attacked by someone intent on doing you harm and you had the opportunity to stop him, would you stand there and be kicked to the ground or take the bastard out if you could?

Here is an example.

Got an example where violence against the state gets you anywhere JonL?

"Got an example where violence against the state gets you anywhere JonL?"

Got any where the ideals of the protestors were achieved?

Shining examples anon.
Oh, and millions died after, not during these revolutions, which says to me that these "ideals" weren't what the people were wanting, just another bunch of dictators in charge.

Tim, I was reporting on the fact that peace campaigners are finding inspiration in the Moriori peace tradition. From that you have somehow assumed I am a pacifist, advocating a strict adherence to non-violence in all cases. I'm not, and I don't. However I do think the tradition of non-violence has a lot to teach us. For more, see http://blog.labour.org.nz/index.php/2009/10/05/war-and-peace/

Thanks Phil. You wrote of it in approving terms and I've drawn the wrong inference.