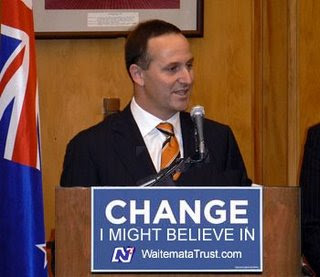 Key rules out fast action on rort by rich
Prime Minister John Key is ruling out immediate moves to stop well-off families rorting the Working for Families scheme, saying he will wait for a high-powered tax review group to recommend changes in December. The Treasury and the Inland Revenue Department have said more than 9700 families claim the tax credit and also own rental properties and claim losses on them to offset their other income. Others on high incomes use trading companies, sheltered within trusts, to lower their taxable income allowing them to pocket thousands of dollars in tax credits that were supposed to go to struggling low and middle-income families.

Mungo no understand? When the dirty filthy bennies were solo mothers, Paula Bennett couldn’t breach privacy laws and the cabinet manual fast enough to release personal information to the media, but now the dirty bennies are wealthy voters more likely to be National Party supporters we won’t be moving with any great speed to do anything about them, ain’t that funny? I suppose that’s fair, because after all, aren’t these wealthy NZers who manipulate the rules to gain allowances doing EXACTLY what Bill English the Minister of Finance does with his Wellington accommodation allowance? What’s good for the Minister is apparently good for the wealthy.

National love class stratification. The more fear of being in the newly created bene bottom class with no privacy rights from the State, and a higher class that all those middle classes frightened about being in the no rights bottom class can aspire to, the more society becomes proper! With this new announcement by Key they are creating another class of NZer, the wealthy bennie who apparently needs time and education and not public outing in the media.

We have different levels of morality in NZ depending on how much money you have.
For the rich, the 'rational actor model' is how we judge morally 'correct' behavior.
But for the poor the 'protestant work ethic' applies.

I personally look forward to the list being published, benefits received, value of shelters, the lot.

Has anyone tried a FOI using Bennett's precedent?

Actually bomber it's the middle class, who pay most of the taxes in this country, and are the biggest voting block.

A bit of naming and shaming might be fun seeing as privacy in these matters doesn't seem to be a problem.

Those structuring their tax to receive WFF, when they were well off, were taking taxpayer dollars off the rest of New Zealand.

Do you actually have any proof of this or are you talking out of your arse.

You can’t have it both ways dole bludgers! Good on you Paula B. They can't expect to have both privacy and freedom of speech!