National demolish their byelection chances with a motorway! 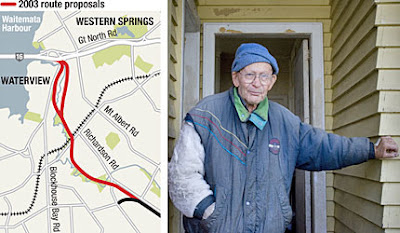 Waterview's vow: We'll block bulldozers
Residents of Mt Albert and Waterview in Auckland are preparing for battle to save hundreds of homes and hectares of green space from road-building bulldozers. "They're not going to destroy the whole of Oakley Creek by chucking a motorway down it," said Avondale Community Board chairman and business association leader Duncan McDonald last night. "They won't get a motorway - the people will lay down in front of the bulldozers. "We'll put this on websites showing all the greenies around the world what they intend to do to Oakley Creek."
The Government announced yesterday it would ditch a Labour Government plan for twin tunnels since costed at $2.55 billion. An alternative route for the 4.5km motorway, to be announced today, will probably require the demolition of at least 300 homes, against the 160 that would have to be cleared around tunnel portals.

Oh God, what a public relations nighmare, can you see it now, old blokes getting dragged away from bulldozers as they cry with the demolition of the homes they've lived in for 50 years? What a dumb idea - National hate public transport, their corporate chums build roads and they like to keep their corporate chums happy and with this decision National seem to have written off their chances at winning Mt Albert to keep those roading giants happy. Former National Party leader Jim McLay is National’s adviser on roads and also just happens to be the head of the Australian Toll Road company, Macquarie in NZ so all those road tolls that Maurice Williams was happily boasting about prior to the election seem with this decision to not only be on the cards but firmly locked in. For National to manipulate the tunnel costs so they can try to argue that it's too expensive is bullshit!

I don't think this has any benefit to the roadworkers does it? Surely they would have still had the work if the tunnel went through...

Oh they are certainly wanting to do it on the cheap, but they are pushing for more roads over public transport

I wonder whether they will keep the tunnel under herne bay to get rid of that ugly victoria park over bridge that obscures that lovely view from their friends houses up on the cliff?

A PR nightmare for National that's for sure. They have just shown their true colours - profit before people. Mark my words there will be more and more of this type of thing happening under Jonkey and his feckless band of mongrels.

Good luck to the Waterview/Mt Albert residents whose homes are threatened.

Waterview wont be tolled, it wont be privately financed so your conspiracy theory about Macquaries is a nonsense. Macquaries knows damn well that there is at best only one possible PPP sized road project in NZ - Transmission Gully - and Labour poured more into that than the Nats ever promised.

To claim the tunnel costs are manipulated is outrageous when the MoT and NZTA, both strictly independent, both with CEOs (and the latter with a Board) all appointed by Labour (excluding Mike Williams who stood down for obvious reasons).

You have no evidence for these ridiculous claims, there is plenty of evidence about how much Labour poured into the contracting sector and wanted to maintain its size and capability over the longer term. Do something called research.

Oh really Liberty - is Jim Mclay the National adviser on roads, does he not work for Macquaries? National don't give a fuck about public transport and that's why they are building this watse of road now, relying on Macquaries 'understanding' of the situation in NZ is just so fucking naieve it's difficult not to laugh, the Australian Banks certainly look after us don't they liberty.

I'm not comparing Labour's appalling record on roads, I support NO roads being built there, The Greens are right, so put your favourite attack lines on Labour back up your arse.

If National said they were going ahead with the expensive tunnel option, you would be accusing them of trying to buy the Mt Albert by-election.