[UPDATE-- 4:30PM:
The panic and whining over at the Standard has this afternoon reached paranoia-level hysterics. From whom? The supposed "Green supporters" all a tizz over the Green candidate, Russel Norman, calling the Labour candidate "grey". I kid you not. 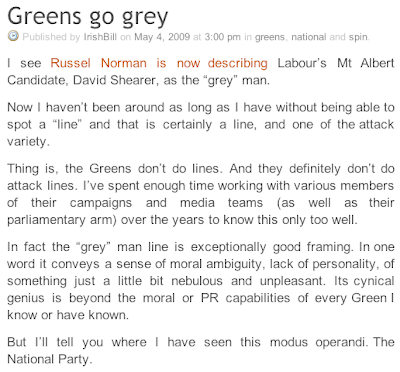 It's the meek mild-mannered Dr Norman not following the orders from Fraser House that offends them of course.

Anyone else would be remarking on how ironic it was that the bland Norman was calling Labour's candidate a somewhat richer shade of his himself given Shearer's CV reads like James Bond and Norman's like the unseen accountant that Q said was always knit picking. If Shearer is grey, Norman is a paler shade of grey.

Very uncool of the Labour Party not to have just brushed this off. --UPDATE ENDS]

The chaps at the Standard have gone through great lengths to attempt to portray themselves as not being a Labour Party blog operated by the parliamentary research unit and the unions inter alia the EPMU. They do this by claiming that some of them are supporters of the Green Party. This ruse was only going to work if the designated "Green supporters" played their role without slipping up.

And yet at every crucial turn they will invariably back Labour against the Greens. Always. It's the party line - and that party is Labour.

Their credibility on this issue of independence from the Labour machine got another fresh coat of paint-stripper this morning:

So the co-leader of the party the blogger supposedly supports is intent on actually winning the seat - instead of just rolling over for Labour - and what's the reaction from one of the supposed Green supporters?

It's a tattered facade being peeled away by their own admissions:

The only thing I’d add is that Norman’s line about Shearer being imposed by Labour’s central office is a flat out lie, and he knows it.
- So the co-leader of the party he supports is a liar now. And the sin is to lie about the internal workings of the Labour Party's selection. Right. But that last paragraph is closer to gold:

I’m not going to switch to Labour in a hurry, but at the moment I’d rather piss my vote away on the Alliance than support your lot.
- Right... so Tane thinks Dr Norman, the Green's co-leader, contesting the seat to win it off Labour is damaging the Greens?And what, pray tell, does his ranting that undermines Norman do apart from damage the Green's chances? Why would a supporter of the Greens make reference to the party as "your lot"?

We are expected to withhold our disbelief at every post as a blog dominated by the Labour unions has its designated "Green" bloggers kick the shit out of their own candidate.

Well at least they've changed their server hosting their website to one not hosting Labour/EPMU sites labour party straight after it was discovered as such.

Well spotted Tim.
I said as much just last thursday.

Bomber personally I think your putting way too much weight on Kiwiblog and Whaleoil's influence...shit if the Labour Party lets its enemies determine such matters heaven help them.

Being blunt who really cares what they think...biggest blog in the country ok maybe a tiny TINY bit of influence...but Slater is a creep with no say on anything. His blog is an embarrasment (and this from someone "of the right" I might add.)

Go fuck yourself Tim. I've spent a huge amount of my personal time campaigning for the Greens only to see them pull this shit.

And I'm not the only one, Gordon Campbell is similarly dismayed, as is at least one Green MP I am aware of.

I'd suggest you get your facts straight before start mouthing the trite lies of the right. You've got my email. Feel free to have a word before you post again.

Why would supposed supporters of the Green party undermine their own candidate unless they had a hidden agenda and were not really party supporters in the first place?

Tim's not going on what Whaleoil etc claim but from what Tane claim and what he write. Big difference to what 3:27 claims.

Hell, at least Tane's posting under his own name; the plurality of Standard Posts are now written by 'Guest Post' or 'The Standard', I assume half of these are from Clinton Smith and that the rest are straight from 'GJ'.

I got to say as a Labour supporter I have a problem with alot of things "The Standard" spew out....almost as bad as those right wing blogs which seem obsessed with talking shit!

U r a Key man yourself though aren't you Tim?

Bloody hell, why are you all still protecting these pricks.
They are paid bloggers.
The tane character who claims to be a greenie is an epmu employee others are on Labours dime. It was a labour party initiative with EPMU support. Stop giving them an air of integrity by beating around the bush. The EDDIE Character came out of phil goffs office and she is running the comms for the by-election and the clinton smith idiot was shoehorned into the parliamentary library when Labour lost the election. Quite how somebody like this can be trusted in the library is beyond belief.
The standard is not a blog. It is simply a propaganda site set up by the labour party and staffed by labour and union employees.

If by some miracle of biblical proportions you don't actually already know this Tim feel free to email me and I will give you their actual names and direct dial phone numbers so you can ask them yourself.
Russell

"U r a Key man yourself though aren't you Tim?"

Not unless Key has suddenly become a Maori nationalist advocating a seperatist agenda.

Good attempt at disinformation through .

Barnsley - your comments are correct...but dont try an make out the nats dont have a similar setup with that thing farrar and his "sources", ie Key!!!