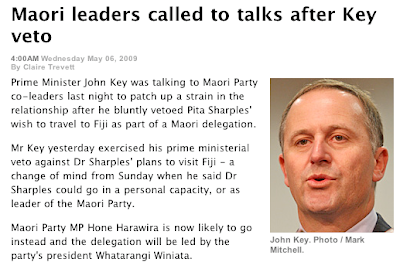 Mactional is an ugly mash sometimes - and the Maori Party's kite-flying on Fiji was another lost opportunity. It was a potentially valuable back channel to the regime in Suva, but it was fumbled. Why did the PM shift his position? Did clumsy MFAT has their fat paws on it, or was it a political botch from McCully? Or was it the Fijian regime that scotched it?

It was the timing the PM could have played with in permitting any delegation that included a Minister of the Crown - enough time to work something out; but now it's all gone. The Maori Party isn't too hot on the diplomatic tango either and has stood on the government's feet because they didn't read the nuances themselves. NZ Herald:

Mr Key had believed he had secured agreement from Dr Sharples on Monday that he would not proceed with the delegation. However, Dr Sharples announced the party was still planning to go ahead with it after meeting his caucus yesterday morning, forcing Mr Key to issue a swift "no".

Mr Key accepted he may have caused confusion, but said his reasons for blocking Dr Sharples' participation were because the Government had to be seen to hold a consistent position on Fiji.

And that is the fiction that would have allowed him to go in a NZ context, because we would not accept that he can't go in a private capacity - even if it is in discussions with the members of the illegal regime; but it would cast him in a different light in an international context. Perhaps ending the chances was the slimy power behind the scenes of the dictatorship - the purported interim (I suppose since he went about the abrogation of the constitution to a self-declared "new legal order") Attorney-General:

Fiji's interim attorney-general Aiyez Saiyed-Khaiyum said they would be happy to receive the delegation.

He would not comment on Mr Key's actions, but said if Dr Sharples was to come he would be treated as a minister of New Zealand.

It seems Dr Sharples has in fact been vetoed by the Fijians.

Vetoed by the Fijians is right!
Diplomatic protocol doesn't even enter into the equation - something more basic than that does.
I'm afraid the Maori Party in their desire to offer some sort of solution haven't the slightest understanding, or even done their homework on the plight of Fijians. What's worse is that they now want to characterise them as "bruthas".
They also confuse Frank Bainimarama and Fijians. Pretty easy to distinguish really - Frank's the one with the gun: the one that is depserately attempting (often successfully) to dismantle, castrate and milk every indigenous institution, suppress opinion, carve himself out as some sort of representative icon of the people in tune with "His" nation, and get his "Own Way".
How about the Maori Party AT LEAST try to "engage" with some of Frank's victims BEFORE they try and "appease" Frank. How about they look in depth at his record so far.
Has the Maori Party actually stated what it hopes to achieve by this encounter with Frank?

And now apparently the Greens. They draw on comparisons with Burma.
Using their logic, when can we expect a Maori Party delegation to Burma?

We also see analogies with Tonga and elsewhere. Few would disagree that there needs to be more done to encourage better representation there but there are signs of slow progress towards that end. With Fiji however we are talking about reversing progress made and appeasing those responsible. Can Sharples and Turia (and now the Greens) be assured they have the blessing of Fijians themselves - I think not

'all children of Maui' - Hone Harawira on RNZ this Checkpoint.

If I were the maori party elites I would be well advised to pull my head in and stop with the diplomatic coup attempt.

Its eary to dismiss it all as politics and grandstanding - it could so easily be viewed as manufacture of outcomes, publicity barking, gameplaying.

Anyhoo: I look forward to coverage of the proposed mission. These Fijjians they want to meet are the scariest ones, not the waiter or cleaner at a resort. A brother or sister of Maui that you may not be or feel too safe around. These people get away with assault, torture, murder; they would appear to carry themselves as gangsters with army patches.

Sik Laws and Holmesy on to them, not a Harawira.