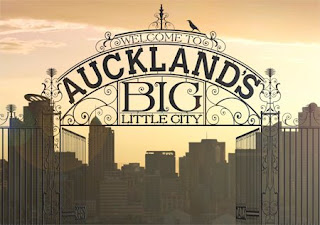 So, there has been a lot of debate over whether Auckland's $1.8 million campaign for the "Big Little City" will work. Here's my two cents: what is profoundly weird about this campaign is that it is a direct rip of Tim Burton, most notably his movie Big Fish (hence the comments that keep appearing on blogs wondering where people have seen the gates before). Perhaps the creatives at Colenso BBDO had run out of inspiration, hence the need for attempting to emulate Burton, but at any rate the incorporation of his style sends confusing messages for a local campaign that is targeted at addressing the Auckland versus the rest-of-the-below-the-Bombays divide. 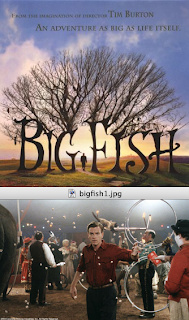 The connotations of Burton's canon function to efface the campaign's overall purpose of showing the uniqueness of Auckland. Burton's work is associated with the exploration of Americana, a clear thematic across the body of his films (including Edward Scizzorhands, Beetlejuice, Batman Returns, Ed Wood, Mars Attacks and Charlie and the Chocolate Factory). Big Fish, the movie from which this commercial owes much of its cinematographic and atmospheric style to, is the story of a son who attempts to learn about his father's life from the side of his hospital bed. What the father relays, however, are heavily embellished stories that recontextualise his life into flights of fantasy - tales of Siamese twins, magical catfish and giants.

The inclusion of this stylistic nod means that Auckland is reterritorialised as fairytale America and the assertion of locality is largely not through landscape but through the cameos of local celebrities who supposedly embody Auckland: Denise L'Estrange-Corbet, Bic Runga and Peter Gordon. Auckland is presented as if it could be interchangeable with any other continental city, including prominent placement of Gucci and Chanel's concept stores. The styling as Americana is evident in the bike our elderly guide rides, the costuming of the flowergirl and fedora-topped business man as 1950s, the traditionally dressed maid and the use of the carnivalesque - a mode that is more asociated with the US than anywhere in NZ. Internationally, the phrase "big little city" is already associated with more Americana, forming the punch-line for tourism in Reno (having been there I can honestly say that its desert environment, casinos and drive-through wedding chapels bear absolutely no resemblance to our city).

Perhaps this is what Colenso's research points to: that Kiwis want to visit cities perceived as international, and pitching Auckland as a local equivalent might divert some of their tourist dollars. Interestingly, it was precisely this internationalness that was seen as promoting a disjoint between Auckland and the rest of the country in ad agency FCB's 2005 study of Kiwi attitudes and culture. Aucklanders were perceived as settling for less land and more money, a perception that put them at odds with the rest of the country (having been brought up Wellingtonian it is a bias I know only too well). In this sense, perhaps positioning Auckland as Americana is advantageous in that those South of the Bombays fantasise Auckland would be anything other than Auckland.

The inclusion of this stylistic nod means that Auckland is reterritorialised as fairytale America.

IS THAT WHY L.A BOUND BOH RUNGA IS READIN THE HERALD AT THE WHITE LADY IN THE RED LIGHT DISTRICT OF FORT ST NOW, COS THE COUNCIL MOVED THEM ON FROM THEIR NORMAL AFTER HOURS MUNCHIES LOCALE, (AL AND PETES WEREN'T BAD EITHER WITH LOADSA MELTED CHEESE ON THE GRILL)BUT IT'S PROBABLY GONNA GET DOWNSIZED TO A TABLOID ONE DAY THE AUCKLAND PAPER) SO ENJOY THE BROADSHEET WHILE YA CAN.BUT WOT I WANT TO KNOW IS , IS BOH AND BIC RUNGA FOR THAT MATTER MAORI-CHINESE-KIWIS OR ARE THEY REALLY A PART OF THE NEW INNER CITY BLOCK OF FOREIGN HORDE STUDENTS CUM ASIAN-SHOEBOX-APARTMENT DWELLERS, (LIKE BOMBER'S "STUDIO" CAN'T SWING A CAT RIP-OFF PLACE)?

HOW DO YOU READ THE 'SIGNS' PHOEBE!

gee you don't have to shout anon

Ae tika tau they are maori chinese, maybe they're trying to be real Auckland Muso's and look like the hanging out making a image thing as well as trying 2 b muso's. They feel comfortable seeing their chinese cousin's maybe! Who cares least they're in NZ. Boh has returned from LA.