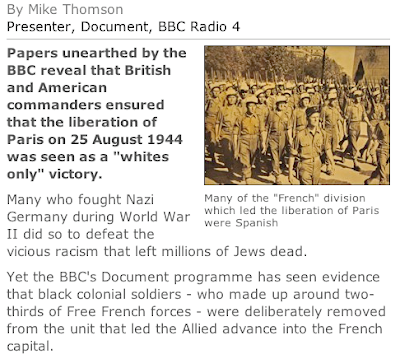 The great myth that every Allied combatant in that war - many of whom were conscripts - fought for a single cause/"freedom" and a better way of life/"democracy" pops once again. Were they fighting the Nazis to stop racism? Were they fighting to end the oppression of one state over another? For human dignity, for rights, for liberty, equality and fraternity?
BBC:

In January 1944 Eisenhower's Chief of Staff, Major General Walter Bedell Smith, was to write in a memo stamped, "confidential": "It is more desirable that the division mentioned above consist of white personnel.
"This would indicate the Second Armoured Division, which with only one fourth native personnel, is the only French division operationally available that could be made one hundred percent white."

At the time America segregated its own troops along racial lines and did not allow black GIs to fight alongside their white comrades until the late stages of the war.
[...]
A document written by the British General, Frederick Morgan, to Allied Supreme Command stated: "It is unfortunate that the only French formation that is 100% white is an armoured division in Morocco.

"Every other French division is only about 40% white. I have told Colonel de Chevene that his chances of getting what he wants will be vastly improved if he can produce a white infantry division."

Finding an all-white division that was available proved to be impossible due to the enormous contribution made to the French Army by West African conscripts.

So, Allied Command insisted that all black soldiers be taken out and replaced by white ones from other units.
When it became clear that there were not enough white soldiers to fill the gaps, soldiers from parts of North Africa and the Middle East were used instead.
[...]
The British and Americans got their "Whites Only" Liberation even though many of the troops involved were North African or Syrian.

For France's West African Tirailleurs Senegalais, however, there was little to celebrate.Despite forming 65% of Free French Forces and dying in large numbers for France, they were to have no heroes' welcome in Paris. After the liberation of the French capital many were simply stripped of their uniforms and sent home. To make matters even worse, in 1959 their pensions were cut.

Former French colonial soldier, Issa Cisse from Senegal, who is now 87 years-old, looks back on it all with sadness and evident resentment. "We, the Senegalese, were commanded by the white French chiefs," he said.
"We were colonised by the French. We were forced to go to war. Forced to follow the orders that said, do this, do that, and we did. France has not been grateful. Not at all."

No mention however of exactly what the French role in this shameful ruse was, done for the newsreels as much as for the rest of the media and posterity/national honour, no doubt. They only had to look white. Just tag another disgrace in the hall of Gallic guilt alongside the Paris massacre of Algerians in 1961 at the direction of the utterly vile Maurice Papon, the offspring of France's love affair with fascism:

The Paris massacre of 1961 refers to a massacre in Paris on 17 October 1961, during the Algerian War (1954–62). Under orders from the head of the Parisian police, Maurice Papon, the French police attacked an unarmed and peaceful demonstration of some 30,000 Algerians. The French government acknowledged 40 deaths in 1998, although there are estimates of up to 200.

The 17 October 1961 massacre appears to have been intentional, as has been demonstrated by historian Jean-Luc Einaudi, who won a trial against Maurice Papon in 1999 — the latter was convicted in 1998 on charges of crimes against humanity due to his role under the Vichy collaborationist regime during World War II. Official documentation and eyewitnesses within the Paris police department indeed suggest that the massacre was directed by Maurice Papon. Police records show that Papon called for officers in one station to be 'subversive' in quelling the demonstrations, and assured them protection from prosecution if they participated.

Many demonstrators died when they were violently herded by police into the River Seine, with some thrown from bridges after being beaten unconscious. Other demonstrators were killed within the courtyard of the Paris police headquarters after being arrested and delivered there in police buses. Officers who participated in the courtyard killings took the precaution of removing identification numbers from their uniforms, while senior officers ignored pleas by other policemen who were shocked when witnessing the brutality. Silence regarding the events within the police headquarters was further enforced by threats of reprisals from participating officers.

The career of Maurice Papon as Head of Paris' police force in the 1960s and Minister of Finance under Valéry Giscard d'Estaing's presidency in the 1970s, suggests that there was institutional racism in the French police until at least the 1960s. In fact, Papon was not charged and convicted until 1997-98 for his World War II crimes against humanity in being responsible in the deportation of 1,560 Jews, including children and the elderly, between 1942 and 1944.

And this piece of human filth continued on in his psychotic, murderous and sleazy political career - at the highest levels of state - for decades. What an indictment of French politics, the French legal system and what a nasty stain on the national character of France:

After he had been personally awarded the Legion of Honour by French President Charles de Gaulle in 1961, he was stripped of all his decorations for his 1998 condemnation for crimes against humanity. Papon was also in charge during the February 1962 massacre at the Charonne metro station, which took place during an anti-OAS demonstration organized by the Communist Party (PCF). Forced to quit his functions after the "disappearance" of Moroccan dissident Mehdi Ben Barka, leader of the Tricontinental Conference, in 1965, he became, supported by de Gaulle, director of Sud Aviation company, which created the first Concorde plane.

After May 1968, he became Minister of the Budget under prime minister Raymond Barre and president Valéry Giscard d'Estaing. In 1981, emergence of details about his past under Vichy led to his trial and, after a very long investigation, conviction for crimes against humanity in 1995 to 1998. Le Canard enchaîné newspaper published on May 6, 1981 documents signed by Papon which show his responsibility in the deportation of 1,690 Jews of Bordeaux to Drancy internment camp from 1942 to 1944. Released before the term of his 10-year sentence on grounds of health, he died on February 17, 2007, having served less than three years of his sentence.

I recently came accross your blog and have been reading along. I thought I would leave my first comment. I dont know what to say except that I have enjoyed reading. Nice blog. I will keep visiting this blog very often.

Hi,
I have written a comment about this article which contains a few errors:
http://www.talkmunich.com/forum/general-discussion/paris-liberation-article-on-the-bbc/msg2327/?topicseen#new