So, the Commodore is aged 54 (55 when the decree takes effect) and as of the end of the month all the civil servants older than him (that aren't his cronies) will be forced to retire... and Audrey Young at the NZ Herald buys the dictatorship's line that it is for economic purposes. That's not the half of it.

It is a mechanism to purge the neutral public service and replace them with his cronies - a process started when his first coup in 2006 began with the police commissioner being replaced by a military officer. Now that accelerates with his second coup, using sweeping decrees without having to bother with a constitution.

It is no coincidence that Bainimarama turns 55 on 27 April and that he can force any state employee to retire that is 55 just three days later. It may be utter hypocrisy, but it is also a classic Alpha Male move to eliminate the senior ranking rival males - the MO of the bully/thug military man. 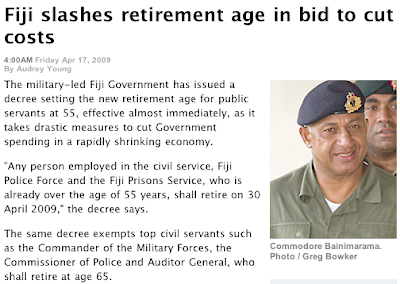 The retirement exemptions are the means the military will use to sack the good sorts of government officials that resist - in any way - the "new legal order." The sorts of people that refused to obey the Commodore the first time around in 2006 and who continued to operate their departments without reference to what they knew was an illegal authority. He had to send troops into some of these offices because the senior civil servants refused to acknowledge the legitimacy of his regime - and the Appeal Court upheld that Bainimarama's government was and is illegal. These are good people with a genuine ethic of maintaining a first class neutral public service. These people will be forced to retire and the Commodore can move his military men and other pro-regime supporters in - regardless of merit and competence and with no mind for the rule of law.

As the military populate the senior roles they will begin to make appointments in their own capacity to staff positions lower down. Aided by the forced retirement decree they may quickly over-run entire departments and state agencies resulting in a sub-standard delivery of service and an intensification of the already systemic forms of government corruption.

--
Meanwhile the media in Fiji are bristling under tight censorship and the military have installed their goons in the nation's newsrooms. They are trying to let us know that their information is being heavily censored at the moment without getting a rifle butt in the face.

[UPDATE-- 1:10PM:
Another day, another decree... another crony - appointed as Vice President because the old apologist and coup collaborator is older than Yoda and needs replacing with... surprise us, Frank...

A military officer - over the 65 year old retirement age - who has to be moved side-ways. 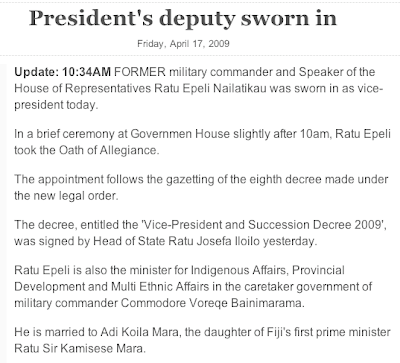 Sanctions always preceed conflict and conflagrations, but if I were them I would take the infrastucture aid on offer from China and tell Australia (scum of the earth detention center jailers)
and New Zealand to stop putting conditions on aid like the ex p.m's low carbon footprint at the u.n.Hey, helen just give me the fucking money bitch!