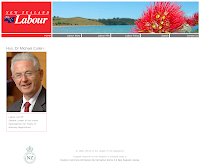 [UPDATE -- 1:00PM:
Labour Party website profile page is blank, so if the party are not apt to say anything here are some thoughts on Dr Cullen, good and ill:

Since this post has focussed on the negative let me say for the record - because this has turned into a bit of a bio - that I regard Cullen as one of the best all-round parliamentarians ever and certainly the best in the House over the last few terms. He is quick witted, humourous, dedicated, passionate, intelligent and in debate - devastating. As No.2 in one of the most formidible leadership duos in NZ history the No.1 would often dump Cullen with the most difficult and complex issues and on her return he would usually have it ironed out having fronted the heat during the crisis and found a solution - evidence of a political and managerial acumen that is still unsurpassed by National and unequalled in Labour. He was the primary go-to guy and trouble-shooter for any flack that came their way. And this would all be on top of his massive workload as Deputy PM, Finance Minister, Treaty Negotiations Minister and Leader of the House... and Attorney-General (despite not being a lawyer, and without that much complaint) which gives you an indication of the cross party respect he had earned.

And if I've read Bassett correctly (in his memoir of his Cabinet days) it is Cullen that is the only person in Cabinet to openly contest Roger Douglas at the top table - while others, like Clark, Goff, King and co. lacked the ideological conviction and dedication necessary to articulate the social democratic ideals of the New Zealand Labour Party at that level. To many he will be a modern day Mickey Savage - to have immediately raised income tax on the top level and then resisted tax cuts in spite of massive surpluses, to have grown the government and its reach of programmes and to have planned for a government-funded universal superannuation are feats of socialist proportions in the age of public-private partnerships and competitive markets. -- UPDATE ENDS] 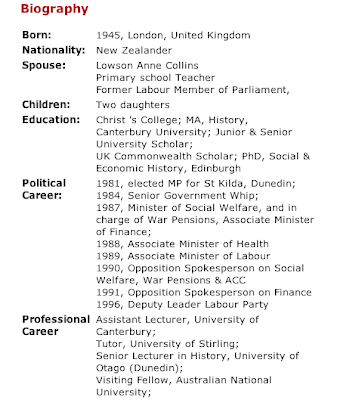 Cullen ran the show with Helen Clark - on the immediate outer was Anderton (as deputy PM in the now distant first term) along with Goff and King as part of the Left's tight five with Mallard and Maharey as outsiders looking in - never being able to break through the old school Princes Street branch clique - and Margaret Wilson limping, Shakespearean-like, into the king-maker role at crucial ideological fractures - that was the Labour/Left power dynamic from the start of Helen's blitzkrieg to the leadership following the triumph of the left faction in 1993 through to today. But Helen leaves us today for New York and the UN - and Cullen a golden handshake c/o the Nats to go into internal exile. 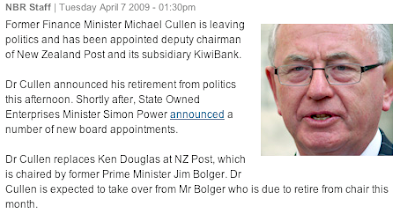 After seeing the long-rumoured Iwi/Govt retirement package for Dr Cullen playing itself out yesterday you get the feeling that since the resulting shame and hypocrisy no longer affect the considerations of either the National or the Labour camps that Gerry Brownlee no less could appoint none other than Parekura Horomia as Commissioner for Responsible Eating, to be housed inside a McDonalds, if it could possibly mean that Tizard would come in off the Labour List. As a mid-term, recycled - and "bat shit crazy" - MP her return would further cripple an already poll-axed opposition. The Nats are prepared to facilitate any bizarre back scratching to get their enemies off the battlefield and expose the opposition's talent-impaired political balance sheet (the list). 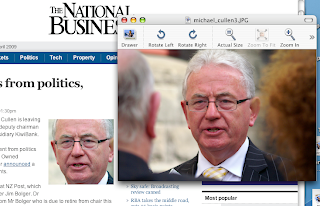 NBR reporting Simon Power is looking forward to it. Whatever. I note the image - there was a smudge of Audrey Young's ginger bramble bush across his ear - I've got to bill those guys. I was under the impression they hadn't used the pictures. He does look quite red in real life.

The press were waiting for him as he came out of the electric Labour Party Campaign launch having just announced to rapturous applause inside the packed Auckland Town Hall - with no prior warning and as Finance Minister - that the government had reacted to the financial crisis by having the Crown guarantee all bank deposits. Astounding.

$150 billion-ish contingent liabilities on the Crown books at a time of financial peril was not without its risks. It would be popular, it would be conventional under the circumstances and the Australians had done it earlier, but for a NZ Finance Minister to do that was a break with Reserve Bank Act orthodoxy and a shifting of one of the pillars of Rogernomics. And he did it - as would be evident very quickly - with little consultation and even less planning. The pictures of Dr Cullen are from his stand-up outside the Town Hall - delayed for quite some time as we would soon learn - because he had to go and do some swift horse-whispering to officials and markets and Soros and Satan and whoever else is involved in not imploding the NZ economy in a currency run induced hyperinflationary Icelandic scenario that everything was cool.

The question of how and who took many painful days later to be answered and even then the scheme was so hollow that any toxic property speculation vehicle could get guaranteed depositor status - total amateur hour and the first one failed just a month ago too. Cullen had caught them off guard in a political play and the policy developed in great haste was poor - so poor. 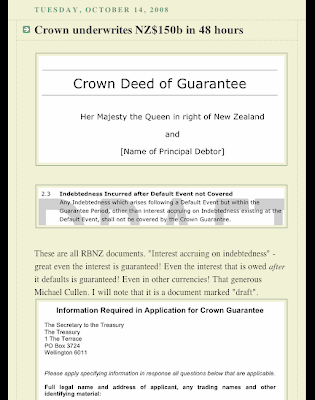 Posted at the time of this madness there were obvious flaws - ones that were not properly fixed either:

Cullen was prone to play politics on this grand scale no matter what the details were or what the impact might be. These ideological considerations were paramount and ironically for all his carping about foreign corporates getting rich out of privatisations of the right they arguably did just as well if not better out of his own poorly handled, shambolic nationalisation of the rail system that gave the Americans and David Richwhite interests a golden hand shake by paying $95,000,000.00 for something that was worth less than $0.05cents - the amount paid to Tranzrail by Cullen for the Auckland line rights (including the bullshit $15m "maintenance contract" that was spun as a different cost to hide the full horror) and the value of the equivalent fraction of line access rights later given up in a deal with successor company Toll when those entire rights to the whole network were put at $1. The worst business decision in the world, I think, is what I called it at the time. He then presided over the deal struck with Toll that was so poor that it broke down and he then decided - for purely political reasons to pay about twice the market value to an Australian firm for a rail system that would yield little and cost a lot at a time when the government could least afford it...
...and now... the Nats are appointing him to govern the State's postal company and its bank!? 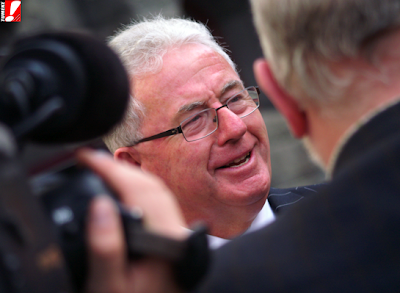 And Cullen will get a role with Tainui!? After advocating and drafting and passing - and now defending - a law that confiscated Maori property rights? WTF? He tore up the NZ equivalent of the Mabo decision - and a tribe grabs him as a hired gun to fight the government when he personally from his own core white supremacist assumptions - and yes, as an English immigrant -constructed the architecture of institutional racist oppression criticised in a UN report. Palestinians don't have Jews as negotiators and vice versa. It's as ridiculous as the Tories doling out their plumb crony party patronage positions to the man they were frothing only a few months ago should be charged under the Public Finance Act for economic terrorism over ACC dodgy number fiddling. It's "life's little ironies" if I heard him right on TV last night. Unbelievable - and yet I'm making none of this up.

Farewell to an excellent Deputy Pm and Finance Minister.

Focus on this government thanks...not interested in a history lesson.

labours shit outa cool leaders, were stuck with national for a while now

I think you are being a little hard on him. Haven't you heard of the sport of politics.

Have posted a positive preface as an update.

Cullen was just a smug Machiavellian cunt. His priority was mocking people who disagreed with him, rather than implementing policies that benefit NZ.

He was a fucking arsehole and I fucking hate him. Try working in the private sector you leech - you wouldn't last a day. Fuckwit.