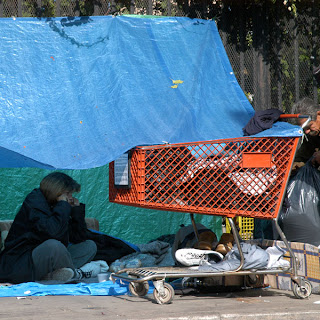 Spend tax cut or give it to the needy: PM


John Key wants people who don't need to spend their upcoming tax cuts to donate them to charity, a step he hopes will help develop an American-style culture of giving.

Speaking at a Philanthropy New Zealand conference yesterday, Mr Key said those who "can't bring themselves to spend their tax cuts" should give the money to a charity rather than save it.

Key's call for the middle classes who don't need their tax cut marks yet another populist measure to appeal to both sides of the political spectrum at once. Targeted to the audience of philanthropists he was addressing, this statement is carefully cultivated grandstanding and yet another attempt to align his style of Government with that of the broader "change" going on in America.

As Alliance spokesperson Victor Billot highlights, perhaps America is not really the best example of a culture of giving to draw from at the moment. The United States is a society of vast inequalities and Billot's criticism that perhaps Key didn't "step out of his gated community" hit the nail on the head for the illusion of equality we are being sold. The thing that is perhaps most etched in my memory from my travels there is the level of poverty - entire streets of tent cities in downtown Los Angeles, crack deals being conducted by homeless people outside the gated barrier of my friend's house on Sunset Boulevard by the homeless, elderly people in the supermarket who couldn't afford bread and milk, pavement communities in San Francisco, teenagers sitting on the side of the road with signs saying "please I need food". This was before the economic crisis really kicked in - I can't imagine what it is like for many of the people living in carpark buildings for security overnight. As many Americans told me, the US solution for poverty under the Bush administration was to move people along - just look at the 35 municipalities that introduced anti-vagrancy measures to get rid of the homeless. (A scheme National's Nikki Kaye has also proposed as favourable for Auckland in her ALT TV stand off with Judith Tizard).

Private giving through philanthropic institutions has done little in the US to solve the growing divide between rich and poor. The corporate environment cultivated in the United States has led to the concentration of wealth in very few hands. As the World Bank's 2001 Development Report detailed, out of the 100 wealthiest financial institutions in the world, 51 were corporations and only 49 countries. In 1998, the wealthiest three Americans had more wealth than 48 developing nations; Microsoft CEO Bill Gates had more wealth than 45% of the US population (Wines, 2006 :331). In 2001, the top 1% of households owned 33.4% of US privately held wealth, the bottom 80% only 16%. As William Wines points out, this means that if one graphed the income of Americans, they would not reach the average wealth until the 80th percentile - 80% of Americans earn less than the average net worth (Wines, 2006: 331). The evidence suggests that this trend is only growing worse.

This is utter and total faff and Key knows it - trying to compensate for his rationale of giving the highest tax cuts to people earning over $100,000 by looking to an American model of philanthropy is outrageous. The American model is increasingly under fire, even by top economists. Take Yale Professor of Economics Robert Shiller's call to democratise finance by regulating it in the same way as medical professionals for an example. When I was in the States there was a genuine sense of anger over the lack of adequate provisions for healthcare and mental health services, a lack that was encouraged by their model of trickle-down wealth. If there is one lesson we should learn from America it is this: if you cater for the top 1% of the population all the time, the system eventually falls over.

We can't vest the health and well-being of the majority of New Zealanders in the generosity of the wealthy. The statistics from the American model prove that this is a very inefficient way of supporting our people - in fact, it actually increases the gaps in wealth distribution. The problem with putting the highest tax cuts to the middle classes is that they tend to save this money, not pass it on (as seen in Bush's failed stimulus package prior to the crisis). Key's call to the Philanthropy New Zealand Conference does little to bolster the weak policy that they have brought in to protect the Kiwi jobless. As Gordon Campbell has highlighted, the Government's transition package is inadequate for many who are trying to keep their homes. Moreover, the nine-day fortnight only applies to a minority of workers and the fast-tracking of previously planned infrastructure projects is simply not enough to create the level of employment needed. The rhetoric is hollow if there are not the measures there to support it, and Key needs to follow up populist claims such as these with some real policies.

another example of how out of touch donkey is!

"We can't vest the health and well-being of the majority of New Zealanders in the generosity of the wealthy."
No that would be crazy, there's a much better way, let's steal their money to pay for it!

you know what saddens me about these 'tax cuts'? is that i get a slight increase in pay while my PA gets a reduction in the amount of student loan she's paying back (ie it will take her longer to pay off) and an INCREASE in her tax rate ... so at the end of the day she's worse off. Sure it's only 24cents a week or something but that's not really the point...

Well written and hits the bulls eye.
Of course the small 'taxation is theft' brigade like John Holmes will never get it.

Anon, 1:10pm - actual numbers please. Of course the morality of students loans is another debate entirely.

Oh please give me a break here. I don't believe the UN Declaration of Human rights includes a passage about free tertiary education for all.

John Key isn't stating that private charity should be used instead of Government welfare but alongside it.

This seems a noble goal in my view.

You would have a better case if there was some moves afoot to reduce benefit payments.

Is it really unfair that someone who builds a successful business is far wealthier than someone who can't even be bothered to get a job?

Is it really unfair that someone who inherits money from their parents and is paid through private school, university, mortgage and helped into the family business is far wealthier than someone who grows up in poverty, with parents who carry out menial but nonetheless necessary work, lacks opportunities for education and contacts in the world of work, and who is exploited in minimum wage jobs for hugely profitable global corporations?

Yes, it is really unfair.

"lacks opportunities for education and contacts in the world of work"

Put down the joint and start studying and stop whining you munter, no one said life you be easy.

If you were brought up in Africa sure, but here in NZ everybody has it pretty easy. You think no one who's wealthy didn't work dam hard for it? Mr Key wasn't brought up in wealth and handed over the reins to the family enterprise.

Seriously, you get free schooling your whole life then get an interest free loan and paid $155 per week to attend university. How much opportunity do you want? I wasn't brought up in wealth but I'm making something of myself.

Oh and that's $155 per week plus expenses such as travel to and from university. Plus you can collect your free money while working part time to top it up.

Can hardly see how student loans are immoral. Pro-tip: borrow as much as you can, live it up or earn some interest on it, enjoy your interest free money and pay back minimum payments, inflation will take care of the rest.

Don't forget that the US is a nation that is awash with guns, so add millions of desperate have-nots, a disastrous situtaion is brewing.

What you also fail to realise is that the US may have a lot of guns but it has a very efficient National Guard which will handle pretty much any outbreak of violence.

THE BIGGEST PROBLEM THEY HAVE IS THE COST OF HEALTH CARE AND THE DENTIST;

BY INCOME LESS THAN;

PAYING FOR MEDICAL CARE THE PERCENTAGE OF AMERICANS WHO SAID THEIR HAD BEEN TIMES IN THE PAST 12 MONTHS WHEN THEY DID NOT HAVE ENOUGH MONEY TO PAY FOR HEALTH CARE AND/OR MEDICINES THAT THEY OR THEIR FAMILY NEEDED:

the very real problem we have, is that the youth of our country are trying to emulate that of the US. So how long before we get our kids who are living on the street handling heavy duty guns? or are they already?

never mind americans killing themselves (go for it!), it's when their influence becomes a real threat on OUR streets that it becomes an issue... or has it already?

Student loans are immoral. This is because they create a situation of inequality and unfairness. The fallback position of "life is not fair" actually shows the corruption and lack of empathy at the heart of the right wing mentality.

Some students will have their education costs paid for by wealthy parents, and others will be crippled by debt at a time of their lives when they are starting families, buying houses (or would have been), etc. Some will study in necessary but low wage occupations and others will study in unnecessary but highly rewarded occupations (corporate law, merchant banking, advertising etc.)
Thus compounding the effect of inequality.

The reason that inequality and unfairness is important is thus. Perhaps you don't share the basic idea of empathy and a sense of connection with other people; you see them simply as competitors or things to use to make money out of. In which case you need to look at the abstract sense that unless life chances have a reasonable spread, and the wealth gap is modest rather than extreme, you end up having essentially a hereditary aristocracy of wealth.

Sure, you may have some ambitious and socially unaware individuals such as John Key, who make it into the ruling caste. But as time goes on, the boundaries will become more and more harder to pierce.

Of course, then there is just the argument that as a wage earner I don't desire the corny, empty and idiotic pursuit of happiness through accumulating wealth and material possessions, a mental sickness that has the interesting side effect of destroying the planet. I may just want to ensure that society exists for the benefit of all rather than a self-obsessed minority.