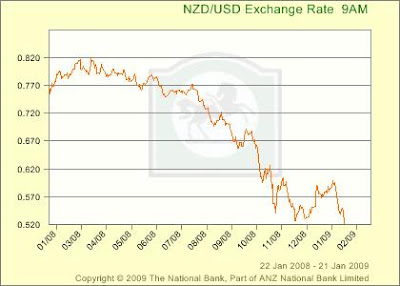 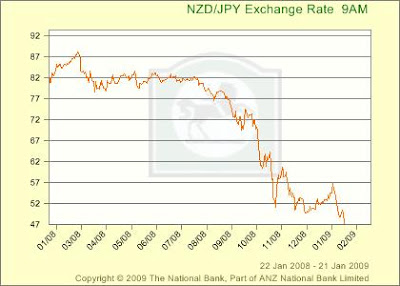 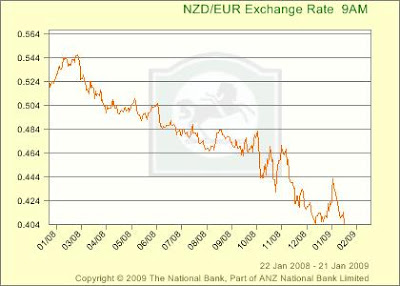 It's those pesky credit ratings again (below) - sending our dollar down. We bottomed out at midday, we are on psychological barriers at the NZD presumed market floor: 47 Yen, 40c Euro, 52c US. We are dipping at or just under these levels the last day. It has been many years since we were at these lows. On 28 October I posted a warning: 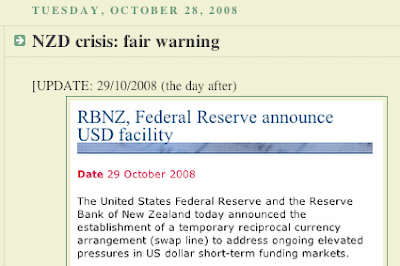 Are they going to use that US facility? Would they tell us if they did? They call it "market dysfunction" - it's a confidence game and confidence is low.

Not even our high interest rates are enough anymore - that's why I can't see our Reserve Bank slashing rates on the 29th as aggressively as some people think they should. We are but one substantial downgrade away from a drop into uncharted territory. 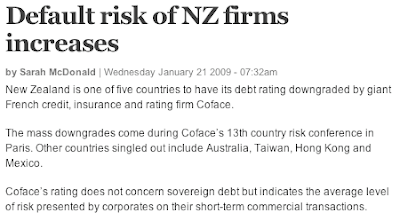 NBR: New Zealand’s rating slid from A1 to A2, with Coface saying it expects the credit crisis to last until the end of 2009 and “no area seems to be spared any longer.”
“New Zealand has been in recession since the start of 2008 as a result of woeful export performance and less buoyant domestic demand amid rising energy and raw material costs and a marked tightening of monetary policy …
[...]
“The sectors with the most exposure include construction, construction materials [especially wood moreover suffering from the drop in American and Asian demand], distribution of furniture and other home furnishings, and automotive retailing. With world prices falling, difficulties could arise in agriculture, especially a dairy segment accustomed to operating with high prices and strong demand from China,” Coface says.

For the year 2008, Coface registered an increase of 47% in its global payment default index with a speeding up during the fourth quarter.

For the first time, it has placed two of the world’s biggest emerging economies – Russia and China – on negative watch simultaneously.

Where's our good news? Where is our market advantage in these uncertain times? We have potential trade advantages with China on the way, but these are very much in the distant future... once they've bought everything with their re-valued Yuan.

The Standard raises concerns of deflation:
The only question was whether there would actually have been deflation (ie a decrease in the general price level) in the three months to December. My figurative money was on that happening, but I didn’t pick such a big drop. Inflation was -0.5% in the last quarter.

But energy and rates and food will continue to rise - as will wages - and if our dollar does fall through today's floor and stay there our oil prices will surge as OPEC moves to cut production and keep its value up. Stats NZ.

The biggest drop - that caused the whole CPI to fall was the fall in the oil price. Transport costs reduced significantly and affected the overall result: 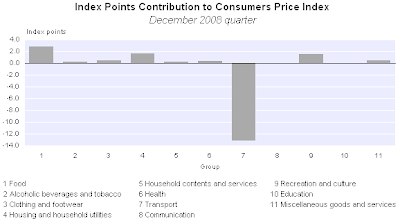 The other components show no sign of significant reduction in price. They continue to rise steadily:

[UPDATE--6:50PM:
"Hokey-dokey", does this fill you with confidence? "Take the rough edges off the recession" he vows.
He addresses the credit rating down-grade in this 15 January press conference (explicitly in regard to S&P) at 4:40 - "long term costs of a down-grade of New Zealand debt would be significant..."
--UPDATE ENDS]

this is excellent write up dude, all our family money is already in $NZ.
so what now ?
I thought about this currency crisis for three weeks and I still can't see why foreigners and aliens are not coming back into NZ for the water, security, and the low population.

On the other hand, if you're paid in US dollars, this is good news. And our little business earns the majority of its income in US$... Call us counter-cyclical.