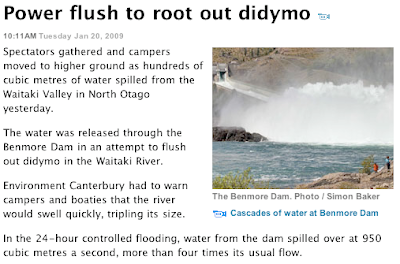 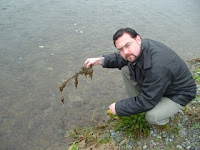 Eh? Some extra water will get rid of didymo? "Flush" it? That is preposterous. They have to put something in the water - fast flowing water is what didymo prefers. It may very temporarily (like during the 24 hours) stop the spread upstream, but really?

Canterbury Regional Council don't mention anything about didymo - just a flood advisory. Nothing at Didymo News either. Nothing at Biosecurity NZ. No actions recorded since the middle of last year.

Could the above imaged NZ Herald story be bullshit? Looks like it. Someone's got the wrong end of the stick, and it's not me.

I've posted on didymo before, many times. 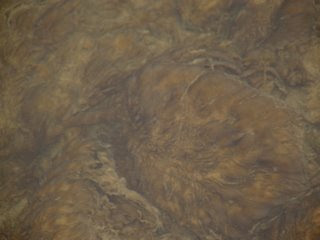 [UPDATE: 5:30PM
This is why they are "flushing" - their chart suggests they are at the maximum upper operating height. The lake is full. Their website says nothing about didymo. 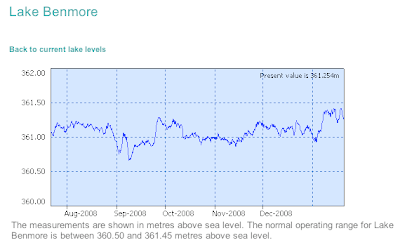 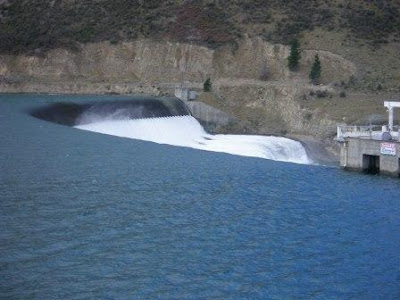 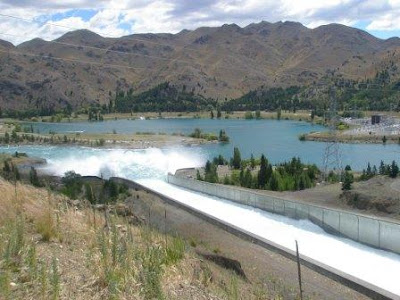 The Press in Christchurch last Friday (16 Jan 2009) reported it as an attempt to flush didymo:
Out you go, didymo
It looks like the didymo claim was from Meridian:
"In terms of what you will see, basically it will still follow the normal river channels largely, or move into the secondary channels of the braided system, flushing the weed and didymo, and refreshing the riverbed," Shaw [Meridian spokeswoman, Claire Shaw] said.

and tomorrow some wanker in a big SUV will charge through the river - because he can - and unable to wash and dry the undercarriage of his wankmobile - and probably uninterested also - he'll then drive off and through another river close by ... flush all you want - until this and other 'pastimes' are banned from our rivers didymo will keep on keepin' on

un believable, or is it,
this is our friende from biosecurity at work,
God, please god if you love me
kill didymo
and raise the value of the NZ dollar.