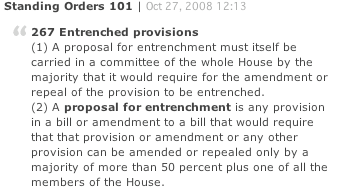 It was wall-to-wall Helen Clark on the three morning current affairs shows today. Out of Agenda, Marae and Eye to Eye I think Willie Jackson, on the latter, did the best job. The three shows crossed and re-crossed the same territory so it wasn't great fare. Winston's jibes against the NZ Herald's cretinous John Roughan made for much better viewing. Winston asked why someone who had just come out in favour of the National Party in his column yesterday can sit there on a panel of journalists. Winston has a point.

The Maori party are now in an excellent position following the PM's back-down and reversal on entrenching the Maori seats. All three interviews posed the same issue: why do you support it now? Clark's position, her new line, is now to say that in 2001 Labour and the greens and the Alliance wanted to. This is on top of her other preposterous line that Labour didn't want to entrench them because Labour had a policy not to abolish the seats! That's not the point of course - entrenchment would remove Labour's Pakeha veto over abolition - a leash around the neck of Maori that she would lose should the seats be entrenched on the same basis as the other central provisions of electoral law. One thing that labour is a master at it is to build and maintain inter-generational dependency, politically and economically.

Tactically the Maori Party has backed her into a corner, and after what she has said, if Labour hold any Maori seats after this election (and they might very well hang on in Tainui at least) they will surely lose them all in the next if they dare vote against establishing equality of protection.

If the Maori Party go with Labour then National already have an official policy of not entrenching the seats and will oppose it. Since parliament must pass the 75% entrenchment provision with 75% at some point in the process National can and will veto it. So no entrenchment.

If the Maori Party go with National - and the only reason they would is if they agree (along with all their other demands) to entrench the seats - then Labour must back entrenchment or lose all the Maori seats - perhaps for a very long time. So they will be entrenched.

--------------------------
"Batman" as a nom de plume in the foolishly back-firing attempted Key smear refers to the surname of the man who founded Melbourne in 1834. The documents and the case were in Melbourne. I haven't seen this explanation anywhere else so I'm putting it out there as the most likely one. Maybe one of the staff members accompanying the would-be gumshoe Labour President was called Robin or something too - who knows? And who cares!

Entrenchment doesn't mean shit unless the entrenching provision s268 (I think) is itself entrenched.

This is a constitutional change which requires practical sanctity and support across the house. It is therefore correct to reject entrenchment unless it is accepted across all parties.

It is therefore correct to reject entrenchment unless it is accepted across all parties.
- No, that does not follow from what you say at all. Why would a party of one be able to veto entrenchment? That would be absurd. Consensus only carries you so far, but to say everyone has to agree is an impossible system.

Entrenchment doesn't mean shit unless the entrenching provision s268 (I think) is itself entrenched.

Rubbish. You're the one talking shit.

I'm probably arguing from the perspective of a lawyer

You're really talking about a protection that has never been tested in the courts. If the seats are entrenched by virtue of s268 and it is carried by unanimous vote across the house this will carry a lot more weight in the eyes of judges.

If you want the full protection of maori seats then, in the absence of a written supreme constitution, you should get full support from the house. I'm talking in general terms here not a party of one so that would mean national-labour at least.

It is actually pointless otherwise.

"Rubbish. You're the one talking shit."

Given that you assertion lacks any authority whatsoever I would say STFU.

In short it won't happen so your statement is irrelevent. A binding referendum will do it but that's also against the spirut of the constitution as well so it will never happen either. And you're the one imagining you are at law school studying public law?

So really you're reinforcing what I said.

There are no protections against parliament repealing any law it wants. Whether it's likely or not is actually irrelevant to the issue. What matters is that the courts recognise parliamentry sovereignty which they do.

And further to that point not allowing parliament to repeal s268 would actually be binding parliament so once again you inadvertently support my point though your own ignorance.

Theres only one problem: standing order 267. Well done in getting that amended or repealed.

That really doesn't change anything at all.

I would have though you knew the definition of parliamentry sovereignty but I obviously stand corrected.

PS Once again you are disproving you own assertion about parliament not being able to bind it's successors. Do you often argue by negating your own point. It's an interesting technique.

OK anonymous, get to the point. Have you read SO 267 or are you just an anonumous ignoramus trying to sound intelligentus.

There are no protections against parliament repealing any law it wants

Um.. except standing orders. Explain how you would get around SO 267 and how you`d get that repealed or amended.

Because that's the hub of the matter.

Tim - While I've got no problem with entrenchment at all the most important thing for Maori is to keep National out of power. National has a raft of anti-worker anti-union policy whilst Labour has some new policy to strengthen workers rights and the unions. Maori are predominately working class. So while you may be plugging for a National government you should realise that a National government means 3 years of constant war against the working class. National only seeks to tip the balance in favour of the upper class even more so than it already is. That has always been its prime concern. If MP go with the Nats it will be seen as a betrayal by many Maori and rightly so. If the Maori party go with National they will get their entrenchment, but it will come at the expense of condition of working class Maoris and all working class New Zealanders and what little power the working class yields in the running of their lives and our country. Vote wisely New Zealand.

LOL try to argue that one in court.

You'll be making legal history with that.

I don't rally have time for this shit since I have a torts exam in wednesday.

You still support my points entirely so thanks.

Ha, Dave 1 Anon 0. Suggest you brush up on standing orders.

Uh Dave, You're actually wrong and anonymous is correct. Standing orders can be over-ruled by the speaker and can be changed by a simple majority. Parliament cannot bind its successors, full stop. End of argument. Sorry, you lose.

There may be a convention that you shouldn't do so, but given Labours thoroughly unprincipled behaviour this term, validating theft, changing electoral laws unilaterally, I see nothing that would prevent parliament changing any law as long as the law was passed by a majority of those voting.

Which is an argument for an independent upper house or supreme written constitution.

No hard feelings dave but it's all been pretty much decided.

Exactly. Parliament cannot bind its successors. look at Standing Order 4 - and see if that will be passed by a majority of those voting. Parliament would not be so abusive and neither will the speaker as she would have lost he confidence of the House.

You should read joseph campbell's book on public law.

You seem rather confused on the issue but I'll give you some leeway since you are a layperson.

Gee thanks (layperson blush) Now can you explain why SO4 will/could. is likely to be be used to suspend SO 267 or I might have to set some real lawyers onto you... cos I'm only a layperson without a degree, y'see.

Sure after you've covered your set readings. I like to play fair and arguing with someone who is in an inferior position as to knowledge is just not cricket.

OK Ive covered the set readings sir, now just answer my question ( if you can) .