National's ministerial list contains no great shocks. It's whose out that is of interest. Williamson will be disappointed and Lockwood will be the new Speaker. Is Shane Adern going to be the Ross Robertson of National, is Tau Henare going to be Chair of Maori Affairs committee or is he National's other Steven Franks? I love that they rank them, so they know, and we know, exactly where they are in the order - even the support parties that aren't enumerated are still effectively ranked. Swearing in Wednesday afternoon. 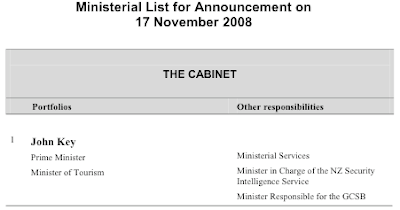 Key: Ministerial services, not quite sure why - closer control over allocating resources to the centre? Tourism is his uninspired pet pick. An excuse to travel abroad and have every hotel in the country down on all fours is at least worth the extra paperwork. 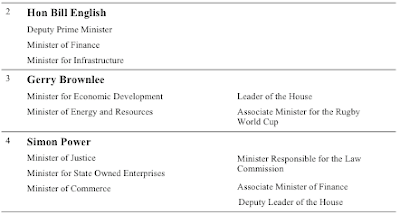 These guys are the co-ordinating ministers, and in this uneasy rivals club. These guys are probably why someone below them can come through to be leader if they play it right (with Murray's backing). They hold the big economic portfolios between them - dealing with reform and restructuring needing capable and competent oversight. Simon Power peaked too soon, the only way for him was down. Gerry Brownlee will make a good Cullen, he's certainly their most effective debater. Bill English is still poised to step in should Key falter.

Arguably Simon Power belongs in this group. The remnants of the brat pack, the breakfast club nerds for the '90s. Nick Smith lasted all of a week as Deputy Leader so he can't progress, Ryall is locked himself into Health, so he would always be given a high ranking as a safe, ministerially experienced pair of hands. 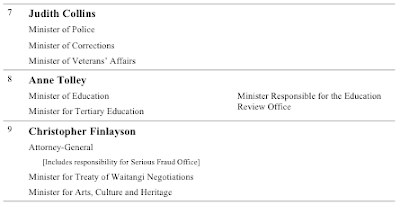 Diversity takes place with National only at the fringe of the front bench. Collins is the sort of Thatcherite final solution to the Dykocracy the Tories get a hard on for. She gets the bondage departments: Police and Corrections. Police Minister (as explained in many posts I have made) is a very powerful position as they directly appoint the Commissioner and Deputy Commissioners - she will be the only real accountability mechanism for the country's only Police force. Anne Tolley, I confess, I've never paid any attention to so my only knowledge of her is that she's like a Jill Pettis or a Steve Chadwick on the Labour side. No one has a bad word about Finlayson - who gets the SFO as well as Attorney-General.

So to recap so far, Pakeha men with a few tokens thrown in at the end to make it look inclusive (staunch women, woman in a stereotyped position and the gay guy gets Arts and culture). 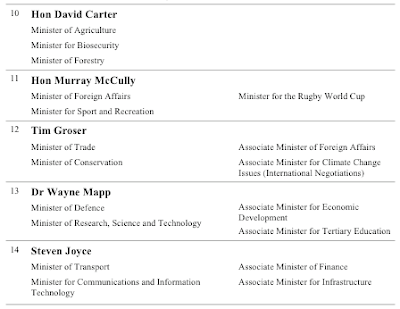 Another tranche of white guys after the compulsory politically correct front bench "inclusion". Of these blokes, Joyce is the one to watch with his two portfolios having billions thrown at them. They trust that someone like Joyce with proven business acumen (and after the successful campaign, also project management acumen) can manage these infrastructure investments efficiently. Straight into Cabinet and he isn't even an MP yet. Well rated. Richelieu gets Foreign Affairs as well telegraphed, and anything to do with rugby. Groser's expertise as a former trade negotiator are going to be put to good use. Mapp up there too, under the radar, and another lawyer, (there must be four or five in the cabinet).

The Maori Women's Welfare League. Key has signaled that Georgina Te Heuheu will be the liaison for Sharples. Bennett at MSD is perhaps a Key move - a "risky" move, but with Tariana Turia as Associate it is also a liaison consideration I suspect. It is going to be big mission at the best of times and in the most experienced of hands, and this novice minister has the biggest budget of them all - can she protect the MSD empire from Rodney's razor gang? 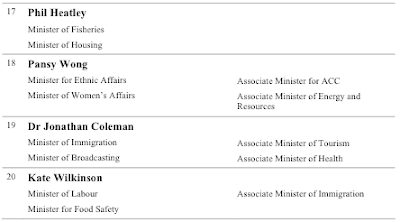 And all the people needed to keep Maurice and Lockwood out. Pansy Wong FFS, look at her lead portfolios: Ethnic Affairs - that's something that Labour established to tap the immigrant vote, and Women's Affairs - last election National campaigned to get rid of it. File under "inclusion". 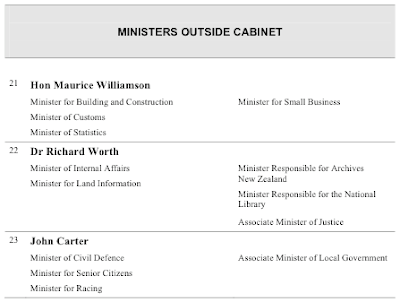 The consolation for waning senior white guys too tainted to get into cabinet: Williamson, because he rubs people the wrong way, Carter because he's a red neck liability and Dr Worth because I think by convention the Member for the Northern Club must always have a seat on the Executive Council in a National government, I believe that dates to before National came into being :) 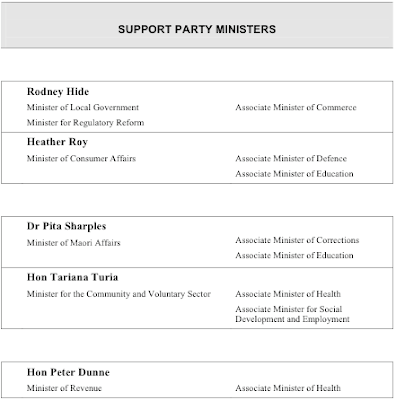 Maori Affairs sticks out as a senior Ministry that is traditionally inside cabinet, but these arrangements are made to fit the cloth they were handed. Te Heuheu and Bennett are the contact points for the Maori Party - that's the way it looks.

Maori want to spend money and Act want to cut it, so given both have associate roles in Health and Education it will be interesting to see how that is balanced. Tolley and Ryall have to deal with that. And then there's Dunne.

The perpetual Revenue Minister, scraping in at the bottom of the 28 member executive. The sensible Christian family hunting party representing the concerns of the capital's public service.

Given Key has such a huge caucus he could never cut it back from the previous government's numbers. Our Westminster system means the baublage (the offices and jobs attracting higher salaries) will need to be at least 50%+1 of the caucus. National has 59 MPs - maybe 58 on specials - so the magic number is 29. 23 ministers plus Speaker, plus a senior and junior whip is 26. Chairmanships of parliamentary committees will take that number at least 30. That's why 99 MPs in the House would be better - contain the magnitude of baubleage to 25-26. Look at the lists - the last three are unnecessary dead weight, only there because of the big caucus and the supports. 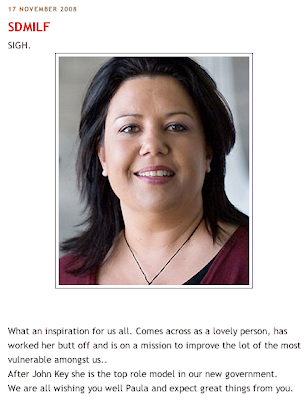 Barnsley Bill over-milfing it somewhat.
- and she is cast as the class traitor and a vulnerable prey just as fast on the other side at the Standard.]

Um Tim didn't you say something about eating this blog if the National and Maori Party formed an agreement?

Shot Tim. I've been critical of ur insipid liberal approach in past. You got this one right on. Machiavellian design meets lack of competence; they are a bunch of shiny arsed suits pumped up on greasing palms n making powerful friends oh so happy...

I was the first to post on Colin Espiner's wager with himself (that he lost) over the Maori Party going into coalition with National - maybe that's why you're confused. I never said that - I was saying that the Maori Party would be more likely to go with National because they can offer them entrenchment, while Labour cannot.

over-milfing it? As a solo mother myself i am aware of these sexist idioms creeping in yummy mummy et al.. I find it deeply offensive and patronising

I believe the PM has historically always held responsibility for ministerial services.

"waning senior white guys ",
"red neck liability ",
"Another tranche of white guys ",
"Dykocracy",
"Thatcherite final solution ",
"bondage departments",
"An excuse to travel abroad and have every hotel in the country down on all fours is at least worth the extra paperwork.",
dear me, what a cliche-mongering racist cynical and negative drongo you are. Grow up man ! grow up !