Hone Harawira to Labour: "if you want a relationship with us: drop the seats - pick up the party vote." 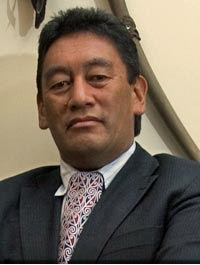 In an interview to be broadcast tonight (Let's be Frank 8:30pm Alt TV Sky 65) Maori Party MP Hone Harawira says the Maori Party are pursuing a strategy of accomodation with Labour in the Maori seats. But Labour don't seem to be listening.

While trying to present the two main parties as evenly poised for Maori Party post-election support he conceeded that the discussions with Labour were "pretty forced" while "conversations with National are a lot more relaxed".

[Labour] talk up a storm that they're going to win [all the Maori seats] back; but the reality is that's [not] going to happen and all we're saying to them is, you know, stop being blind to this fact and deal with the reality of how far behind you are - if you want a relationship with us: drop the seats - pick up the party vote.

The Maori Party's 2-3% party vote support - if transferred to Labour - might make all the difference in a close finish. But such an accomodation could back-fire if it created a large over-hang of MPs and bring into question the MMP system. Messages in some electorates have been sent from on-high though never officially about helping other parties out - perhaps most famously in Wellington Central in 1996 when Jim Bolger knee-capped his party's own candidate to back Prebble. But to do this for the seven Maori seats? I can't see Labour ever doing that - even if it needs the extra 2%.

Harawira also disclosed that a pact with his relation, Labour Minister Shane Jones, exists that they will not stand against each other in an electorate - meaning the strongest Labour candidate in the Te Tai Tokerau seat will never stand against Harawira. I wondered why Jones never stood against Harawira - now it all makes sense. He seemed like he had really been put on the spot by that question. Which makes me wonder if this is public yet. I wonder if Labour knows?

I reviewed the tape. It's a good interview.

Driver: So, you don't think you'll be the last cab off the rank?
Harawira: We've already had the phone call. Tariana and Pete have already had a number of lunch, dinner and breakfasts with Helen. Mind you they've had a number of breakfasts, lunches and dinners with John Key, Jeanette Fitzsimons...
Driver: Could they form a coalition with John Key?
Harawira: I don't see why not. I mean our role as the Maori party is to defend Maori rights and advance Maori interests for the benefit of the whole nation. It doesn't matter who the government's going to be - as long as we are there to ensure those things happen. Why not? Now people say to me, 'How on Earth could you think of going into - of jumping in bed with - National?' and I answer the question: And what's Labour done for Maori in the last nine years? I just asked them [interrupted]
Driver: They kept the seats.
Harawira: Ah, when National was in they didn't get rid of them.
Driver: But National are saying they will.
Harawira: OK, well I went back to Labour and I said, 'OK, if [they're saying] if they'll get rid of them we'll change that by entrenching the seats, so they can't be gotten rid of accept with a 75% vote.
Driver: Right
Harawira: And Labour said, No [pulls face]
[...]
Harawira: The conversations with National are a lot more relaxed than they are with Labour - and the reason why is because, ah, National's not competing with us in the Maori seats, Labour is, and so the discussion with Labour, ah, people, are pretty forced - if you know what I mean.
[...]
Harawira: They talk up a storm that they're going to win them all back; but the reality is that's [not] going to happen and all we're saying to them is, you know, stop being blind to this fact and deal with the reality of how far behind you are - if you want a relationship with us: drop the seats - pick up the party vote.
Driver: Why won't Shane Jones stand against you in Te Tai Tokerau?
Harawira: Ah-ha! [smiles, looks uncomfortable and caught out] um, [long pause] Shane and I are quite closely related, um we've done things together in the past. And we actually came to an arrangement [eye brow raise] before either of us went in to parliament. [pause]
Driver: What sort of an arrangement?
Harawira: That we wouldn't stand against each other.
[...]
Driver: Do National Party supporters and Maori Party supporters have anything in common?
Harawira: [pause] um, I don't know. Probably not. One thing I will say for National, um, over Labour [smiling] is National stabs you in the front - so you see it coming and you can prepare yourself for it. Whereas, Labour - it's 'howzit' - then err [stabbing action]. You know what I mean. It's a different kind of a look, and I'd rather deal with, I'd rather deal with people from National to tell you the truth. Even though my feeling is we should be standing more with Labour than National. I find it easy to deal with people who say to me, 'mate, we're going to give you one shot at this and if you screw it up you're never going to get it again - and not you, not your children, not your grandchildren'. So the challenge is on us to try and deliver. And they were the ones who fronted for Maori broadcasting and they're the ones who got that going and they are the ones that got Kohanga Reo going and those are the ones who got Kura going and they're the ones who got Wananga going - not Labour! It was actually National. They challenged us to be good enough to do it and, ah, that opened the door for us to step up to the plate and say 'hell yes, we can!' Labour tends to have a view that we can do it as long as they control it. Well [gesture of disdain] you know - we're way past that way of thinking - and hence the Maori Party.
[...]
Harawira: There's a number of things we're going to be asking for. If it's likely that we're not going to be the player and we are going to have to focus on one in particular: probably be Maori Affairs with an expanded authority. At the moment it's pretty much a denackerised beast because Parekura has allowed it to become that way. We'd want to increase its operational capacity in education, health and housing.
[...]
Harawira: There's a whole lot of them. You wonder why they're even there. And like you said before, there's some people in there and you might [go] 'Holy shit!' I didn't know they were an MP - and some of them have been there ten years.

This this should rark up those clowns from the standard. This is what happens when labour takes the maori vote for granted and then proceeds to fuck them over big time.

Maori have their own voice and they should use it nothwithstanding the historical ratana-labour links.

We shouldn't forget that the maori did better in terms of treaty settlement under national than labour.

I'm sure Harawira is absolutely wetting himself at the idea of Labour gifting the Maori seats to the Maori party. That would really give Maori power to negotiate - with National! Only a Harawira would be stupid enough to think another party would do something like that. A wet dream is all it is.

Ahhhh they have obviously picked power over principles.

Principles would have gone out the window when Labour passed the foreshore and Seabed Act.

Bedsides how if Labour 'gifting' the maori seats? The Maori Party will just take them.

I don't agree with the Maori Party but at least they're not prepared to be screwed by Labour anymore.

I'm sure bomber will be spitting tacks.

I'm sure bomber will be spitting tacks.
Silly anonymous poster, I've stated several times now that the Maori Party in colaition with National would be the only chance of having a moderate party