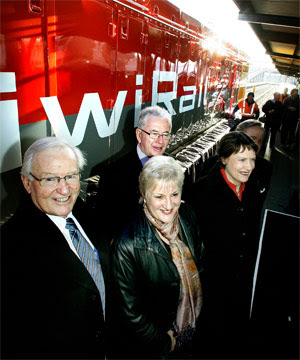 Some 'ugby oaf couldn't handle his piss and was being a dick. And he's still on the team.

That occupied the first six minutes of both major television networks' news broadcasts last night. I saw an ad for sheep dip, or drench, or whatever, in the break. Welcome to New Zealand.

The only blogger I noticed who had anything to say about whatever that bullshit was all about that occupied the minds and held the attention of the nation's media - was a chick.

I don't really know, and I certainly care even less, about whatever the story was about. I don't want to waste my time on it. But these media decisions are curious. The government buys back the entire national railway system and launches this multi-billion dollar project - to be overseen by a former Prime Minister and nemesis of the government - and what do TV3 and TVNZ lead the news with? A minor All Black's minor penalty for minor embarassment. New Zealand.

Do you love the picture? It's like an '80s reunion. Reading Bassett's book on Lange makes you realise all these characters, Anderton, Goff, Wilson and Caygill, Lockwood Smith, McCully and all the others popping up from time to time, are really hangovers from the 70s and 80s; searching for relevance in this day and age.
Tim Selwyn at 4:35 pm
Share